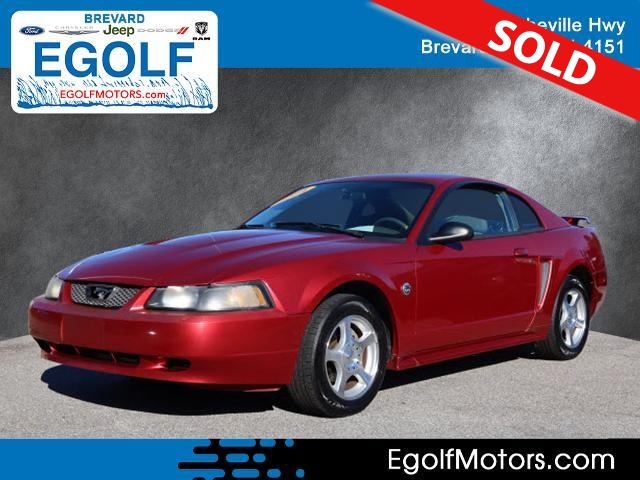 Mustang V6, 2D Coupe, 3.8L V6 EFI OHV. Call Egolf Motors in Brevard at 828-884-4151 then x 1. Weve been serving customers in Western North Carolina and upstate South Carolina for over 40 years where you feel like family when you walk through the door. Call Egolf Brevard at 828-884-4151. You make the drive, well make the deal and youll feel like family!

Fittingly, the Mustang is the last surviving member of the "pony car" breed. For the 2004 Ford Mustang, the Anniversary Edition should give enthusiasts something to brag about.

With an all-new model scheduled for '05, there are few changes for the 2004 Ford Mustang. All models wear commemorative 40th anniversary exterior badging, while V6 and GT models can be ordered with a full 40th anniversary package that includes additional exterior and interior enhancements.

The Ford Mustang debuted in April of 1964 as either a coupe or convertible with six or eight cylinders under the hood, and became a national sensation. Ford sold hundreds of thousands of Mustangs, convincing General Motors and Chrysler Corporation to release their own variations on the theme. By the late 1960s, the Mustang competed against the AMC Javelin, Chevrolet Camaro, Plymouth Barracuda and Pontiac Firebird. But, like Elvis Presley, the Mustang had evolved from lightweight and simple agile to overweight and cumbersome. By the time the oil crisis of 1973 hit, the Mustang had lost its edge in terms of performance and appeal. Reborn for 1974, the much smaller Mustang II rode on a Pinto platform to save development costs and improve fuel economy. Emissions regulations had stifled performance, and the convertible model had disappeared from the lineup. The mid-1970s represented a dismal time for the American automobile industry, and the emasculation of the Ford Mustang is perhaps the greatest example of what went wrong in the middle of this decade. Not surprisingly, sales reached an all-time low during this period of time. Still, Ford wasn't ready to give up on the Mustang. In 1979, it was completely redesigned. There was even a performance model with a turbocharged 2.3-liter, four-cylinder engine, and a stripes-and-decals Cobra version. The new Mustang proved popular, and by 1982, Ford had endowed it with a relatively strong (for the time) V8 engine and the GT designation that continues today. General Motors released a sexy new Camaro and Firebird duo in '82, so Ford countered by continually updating the Mustang GT and engineering a special turbocharged performance model called the SVO. In the late 1980s, Mustang enthusiasts heard that Ford planned to replace the rear-drive model with a front-drive car based on a Mazda. Recoiling in revulsion, these purists bombarded Ford with hate mail, effectively convincing corporate brass to keep the all-American Mustang as it was and release the new vehicle under development as the Probe. This delay meant Ford needed to market the existing and aged Mustang beyond its expiration date until a suitable replacement could be styled and engineered. To retain buyer interest, Ford kept boosting power and improving the Mustang in subtle but effective ways. The new car arrived in 1994 wearing retro styling cues such as tri-bar taillights and a side scoop. Inside, a dual-cowl dashboard provided plenty of pizzazz. A coupe and convertible were available, with either a V6 or V8 engine. A Cobra model with added horsepower and special performance upgrades paced the Indianapolis 500 that year. In 1999, the Mustang was updated with boxy new styling and more power. The 2004 Ford Mustang appeals to those who love the burble of a V8, the handling of rear-wheel drive and the appeal of a legendary car with a long and storied history. For 2004, Ford will offer a 40th Anniversary trim package to commemorate the longevity of the original American muscle car.

Base, Deluxe and Premium models have a V6 engine. The GT Deluxe, GT Premium and Mach 1 get a V8. Coupes are available in each trim, while the convertible is limited to regular and GT versions of Deluxe and Premium trim. Standard equipment on base models includes 16-inch wheels, air conditioning, a CD player and power windows, mirrors and locks. Deluxe models add a power driver seat, cruise control and a spoiler on coupes; additionally, the GT Deluxe gets 17-inch wheels, an upgraded suspension, sport seats and a limited-slip differential. Premium models come with leather upholstery, an upgraded sound system and a CD changer. The 40th Anniversary Package is available on all Premium models (either engine) and specifies either red, black or white exterior paint; special Arizona Beige wheels; brushed aluminum pedals; and embroidered floor mats, while deleting the spoiler on coupes and adding a better-insulated cloth top on convertibles. The limited-production Mach 1 includes a functional shaker hood with ram-air scoop; special interior detailing; unique alloy wheels and exterior trim; a lowered, retuned sport suspension; and upgraded brakes.

Standard on base, Deluxe and Premium Mustangs is a 190-horsepower, 3.8-liter V6. Step up to the GT Deluxe and GT Premium, and you'll get a 260-horsepower, 4.6-liter V8. The Mach 1 gets a tweaked version of this V8 worthy of 310 horsepower and 335 pound-feet of torque. All Mustangs are rear-drive and can be equipped with either a five-speed manual or a four-speed automatic transmission.

Four-wheel disc brakes are standard on the 2004 Ford Mustang. Antilock brakes and traction control are optional on all Deluxe models and standard on all Premium and Mach 1 models. The Mustang coupe received five-star frontal crash test scores for the driver and passenger. Side-impact testing resulted in three-star scores for both front- and rear-seat occupants.

Instrumentation is simple and controls are straightforward, if sometimes hard to locate and reach. Seats in the V6 and GT models are flat and featureless; the Mach 1's seats offer a retro design to go along with their stiffer bolsters and greater adjustability. You can spruce up the interior by adding the 40th Anniversary Package, which bundles together metallic trim, aluminum pedals, embroidered floor mats and upgraded head restraints. It's not uncommon for Mustang drivers to find it difficult to achieve a comfortable driving position. This is because of the rather awkward placement of the shifter and steering wheel in relation to the driver seat.

Mustangs are crude by modern standards, but strong engines and low prices keep them plenty desirable next to the more refined sport coupes and convertibles on the market. The performance-oriented Mach 1 is a terrific blend of power, handling and retro design, while the GT offers V8 power for under $25,000. Even V6 models can be entertaining when equipped with a manual transmission. Both the GT and the V6 make fine daily drivers, especially for those who crave tail-out thrills and don't mind a less-than-ideal seating position.