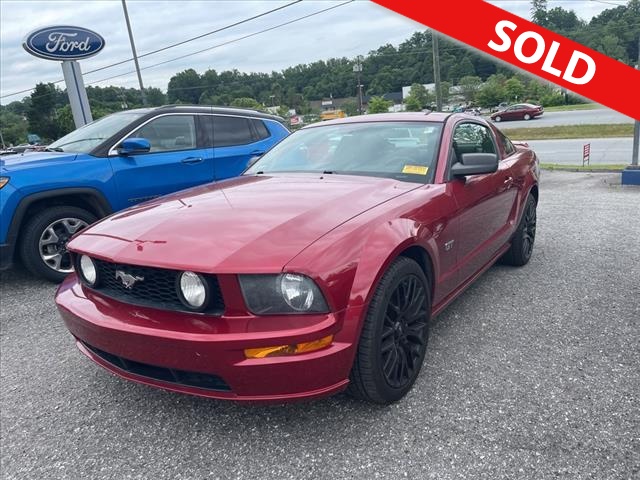 More than a retro reskinning, the latest Mustang presents compelling performance in all areas and offers V8 enthusiasts a tempting price tag.

Solid V8 power in GT models, about as well mannered as a car with a solid-axle rear suspension can get, slick retro interior, good cabin ergonomics.

The Ford Mustang debuted in April of 1964 and became a national sensation. By the late 1960s, the Mustang competed against the AMC Javelin, Chevrolet Camaro, Dodge Challenger, Plymouth Barracuda and Pontiac Firebird. But, like Elvis Presley, the Mustang had evolved from lightweight and simple into overweight and flashy. By the time the oil crisis of 1973 hit, the Mustang had lost its edge in terms of performance and appeal. Reborn for 1974, the Mustang II rode on a Pinto platform to save development costs and improve fuel economy. Emissions regulations had stifled performance, and the convertible model had disappeared from the lineup. Still, Ford wasn't ready to give up on the Mustang. In 1979, it was completely redesigned. There was even a performance model with a turbocharged 2.3-liter, four-cylinder engine. The new Mustang proved popular, and by 1982, Ford had endowed it with a relatively strong (for the time) V8 engine and the GT designation that continues today. A new car arrived in 1994 wearing retro styling cues such as triple-bar taillights and a side scoop. Inside, a dual-cowl dashboard provided plenty of pizzazz. Time marched on, however, and the Mustang was in desperate need of a more modern platform by the turn of the century.

Enter the current Mustang, redesigned for 2005. The canted nose with its big grille and round headlights recalls the '67 to '69 Mustangs, while the side sculpting, fastback roofline and taillights recall those ponies of the 1965 vintage. Even the triangular side windows are reminiscent of what Carol Shelby did when he made the 1965 Mustang "2+2" (a.k.a. the fastback) into his Shelby GT 350. The Mustang's interior is unique and matches the exterior design theme. Obvious old-school influences are found in the instrument panel: A dual-hooded dash with aluminum accent panels pays obvious homage to the 1967-'68 Mustang, as do the big speedo and tach, circular air vents and plump, round steering wheel hub. Optional changeable backlighting illuminates the nostalgic instruments; at the press of a button one can select from white, blue, green and orange hues. For power, the base Mustang uses a 210-horsepower V6, while the GT packs a 300-horse, 4.6-liter V8 with variable valve timing. The suspension boasts a relatively supple ride and ultracrisp handling. Ford has done a fine job with the latest Mustang, not only in terms of styling, but also in performance, handling, ride dynamics and basic ergonomics. If you're looking for an affordable coupe or convertible that's fast and fun and comfortable enough to drive every day, this is your ride.

Four-wheel disc brakes are standard on all Mustangs. Antilock brakes and traction control are optional on the V6 models and standard on the GT. A stability control system is not offered. Side-impact airbags for front occupants are optional on all models, but full-length head curtain airbags are not available. In NHTSA crash tests, the Mustang earned a perfect five stars for front-impact protection and four stars for side-impact protection.

Interior ergonomics are vastly improved over previous Mustangs, as the driver seat now puts you in the proper position to work the shifter and operate the controls. Switches and handles feel substantial, and although many of the plastics are coarse in texture, fit and finish is generally good. Retro styling abounds in little touches like the large round speedometer and tach (which feature an appropriate vintage font), dual-hooded dash and a cool steering wheel with a small round airbag hub and available metallic spokes. A striking color accent package features red leather seats, red door panel inserts and red floor mats all set against a dark charcoal interior.

Acceleration is spirited with the V6, regardless of whether you choose the fun-to-shift manual or the responsive automatic. The GT provides the quintessential muscle car experience, of course, with loads of torque available right off the line and an exhaust note to match. The Mustang turns crisply and eagerly into corners with a flat and composed attitude. The brakes are powerful and control in bumpy corners is good, despite the continued use of a solid rear axle. Wind and road noise are low for a muscle car, and ride quality is surprisingly compliant.