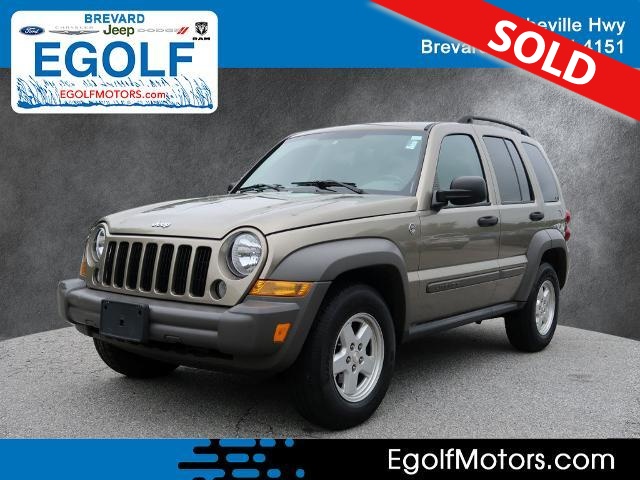 Liberty Sport, 4D Sport Utility, PowerTech 3.7L V6, 4-Speed Automatic VLP, 4WD, Beige, Cloth. Call Egolf Motors in Brevard at 828-884-4151 then x 1. Weve been serving customers in Western North Carolina and upstate South Carolina for over 40 years where you feel like family when you walk through the door. Odometer is 90915 miles below market average! Call Egolf Brevard at 828-884-4151. You make the drive, well make the deal and youll feel like family!

The 2006 Jeep Liberty is well suited for small SUV buyers who plan on making numerous trips into the wilderness. Otherwise, more urban-oriented buyers will find most of the Liberty's competition to be better at day-to-day drivability and refinement.

The Jeep Liberty gets stability control as standard equipment on all models for 2006. The four-cylinder gas engine has been dropped, however, due to a lack of consumer interest.

The Jeep Liberty is the successor to the aged Cherokee, which was in production from 1984 to 2001. Evolved from the Dakar and Jeepster concept vehicles ('97 and '98, respectively), the Liberty features design themes from each, such as a large greenhouse, short front and rear overhangs, high roofline, rear-mounted spare tire and 16-inch alloy wheels below pronounced wheel flares. It also borrows from the past; the Liberty is a bloodline descendant of the original Jeep Willys. The Liberty carries the trademark Jeep grille with seven vertical rectangles as well as the traditional Jeep round headlamps.

The Liberty, like all Jeep SUVs, is designed as a true off-roader with steep approach and departure angles and a full 8 inches of suspension travel. To help foster competent handling on paved surfaces, the Liberty employs an independent front suspension, a coil-link rear suspension and rack and pinion steering (the first time a rack and pinion setup has been applied to a Jeep product). Generally, the Liberty works best as a go-anywhere Jeep first and a suburban grocery-getter second. As such, for genuine off-roaders, the Liberty is a natural-born leader in the compact-ute segment. Its standing as a daily driver is, however, tarnished by its big thirst at the fuel pump, at least with the V6. Additionally, although its on-road ride and handling is better than its Cherokee predecessor, the 2006 Jeep Liberty is outclassed in terms of overall ride comfort when compared to other compact SUVs.

Two-wheel or four-wheel drive is available for all trim levels, and a full-time "Selec-Trac" 4WD system is available on the Sport and Limited. The base Liberty engine is a 3.7-liter V6 rated at 210 hp and 235 lb-ft of torque. For the Renegade and Sport trim levels, a six-speed manual transmission is standard and a four-speed automatic is optional. The automatic comes standard on the Limited trim. In addition, Jeep offers a diesel-fueled 2.8-liter turbocharged four-cylinder engine as an option for the Sport and Limited. The diesel comes with a five-speed automatic and four-wheel-drive only. Properly equipped, the Jeep Liberty can tow up to 5,000 pounds.

Four-wheel antilock disc brakes and stability control come standard on the Liberty, and side curtain airbags are available as an option. In government crash tests, the 2006 Jeep Liberty earned a perfect five stars for driver protection in a frontal impact, and four stars for front-passenger protection. Side-impact testing resulted in a five-star rating for both front and rear passengers. In frontal-offset crash testing by the IIHS, the Liberty was given a "Marginal" rating, the second lowest of four.

Inside, the Jeep Liberty provides ample room for four adults inside (five in a pinch), with satin aluminum accents and chrome-ringed, black-on-white gauges. A full-size spare is hung on the nifty rear cargo door, which features a single-action swing-gate/flipper-glass system. There's a total of 29 cubic feet of cargo space available behind the Liberty's 35/65-split-folding rear seat and 69 cubic feet when that seat is folded down.

The standard V6 provides good acceleration but drinks plenty at the gas pump. The diesel provides plenty of grunt at low speeds, and its improved fuel economy makes for fewer fill-ups. Like other Jeep SUVs, the Liberty is a sensational off-roader. However, the heft required to make it a surefooted billy goat in the rough hobbles it somewhat on the highway and in the city. Its performance on pavement is tolerable enough, but the steering is heavy and numb, and the Liberty exhibits considerable body roll around corners. On the plus side, its long suspension travel does a good job of smoothing out bumps and potholes.