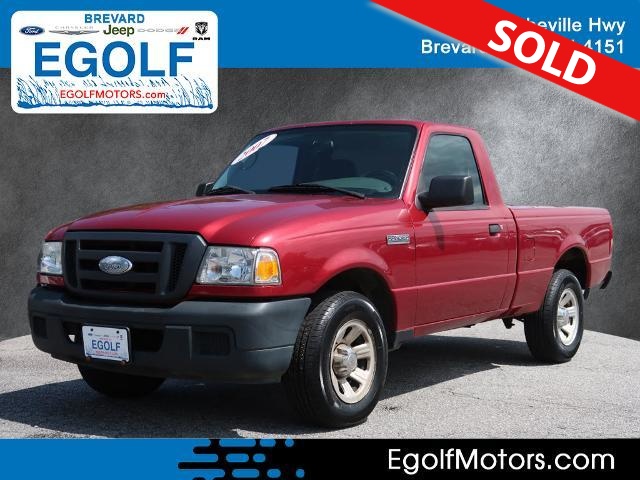 2D Standard Cab, 3.0L V6 OHV, 5-Speed, RWD, Red. Call Egolf Motors in Brevard at 828-884-4151 then x 1. Weve been serving customers in Western North Carolina and upstate South Carolina for over 40 years where you feel like family when you walk through the door. Call Egolf Brevard at 828-884-4151. You make the drive, well make the deal and youll feel like family!

Built on an aged platform, the 2007 Ford Ranger falls well short of the competition in almost every category. Unless you're shopping for a dedicated off-roader, any of the newer compact pickups will serve you better.

Buyers looking at the 2007 Ford Ranger will find more standard equipment compared to last year's model. All Rangers come with dual-stage front airbags with a front-passenger sensor, a tire-pressure monitoring system and an anti-theft system. For entertainment, all CD players are now MP3-compatible, and all head units except the base AM/FM receiver have an auxiliary input jack. Sirius satellite radio is optional on all but base XL models. The 2.3-liter four-cylinder engine is now standard on two-wheel-drive STX regular cabs and two-door extended cabs, in place of last year's 3.0-liter V6. A 4.10 axle ratio is now available on four-wheel-drive models, while 4x4 Ranger XL models can be equipped with skid plates. Rounding out the changes are two new 16-inch alloy wheel designs and a longer five-year/60,000-mile powertrain warranty.

Solid performance from 4.0-liter V6, very capable off-road with either of the FX4 packages.

Once the best-selling compact pickup truck on the market, the Ford Ranger has steadily ceded ground in the sales race to its newer, larger competition. This is hardly surprising, given that Ford's small truck has never been completely redesigned since its 1983 introduction, while peers have gone through two, and in many cases, three, model cycles since then. That's not to say that Ford has left it completely untouched. Substantial changes came during the 1993 and 1998 model years, while the current overhead-cam, 4.0-liter V6 arrived for the 2001 model year. Overall, though, the 2007 Ford Ranger lags behind competing compact trucks in everything from driving dynamics to interior accommodations. Additionally, it's only available in regular and extended-cab body styles. If you want a crew-cab pickup, your Ford dealer will likely point you to the larger, more expensive Explorer Sport Trac or full-size F-150.

Although we think most buyers would be better off with one of the newer pickups in the compact truck segment, the Ranger is not a bad way to go if you're looking for a dedicated off-roader for weekend high jinks. In off-highway settings, the Ranger's shorter wheelbase and smaller overall size become advantages. Plus, Ford offers not one, but two off-road packages for four-wheel-drive Rangers.

If you're not a hard-core off-roader, though, there's little reason to consider the 2007 Ford Ranger. Trucks like the Dodge Dakota, Nissan Frontier and Toyota Tacoma are easier and more comfortable to drive on pavement, and all offer roomier cabs with more conveniences and safety features.

The 2007 Ford Ranger compact pickup truck is available in regular-cab and extended-cab (called SuperCab) body styles. Regular cabs can be ordered with either a 6- or a 7-foot bed. SuperCabs come only with a 6-footer and can be equipped with reverse-opening rear access doors. Trim levels include XL, STX, XLT, Sport, FX4 Off-Road and FX4 Level II. The FX4 trims are available only on SuperCabs.

XL models are sparsely equipped, and air-conditioning and cruise control are optional. The STX adds a few cosmetic upgrades but few additional standard amenities. It does, however, give you access to the Power Equipment Group, which provides keyless entry and power windows, locks and mirrors. The Ranger XLT and Sport are the next step up, as they have air-conditioning and a CD player; the main difference between these two is the Ranger Sport's monochromatic exterior treatment. The FX4 Off-Road model includes a limited-slip rear axle, 16-inch all-terrain tires (30-inch overall diameter), heavy-duty shocks, tow hooks, and mid and aft underbody skid plates. The FX4 Level II gets a Torsen limited-slip rear differential; 15-inch Alcoa wheels with knobbier, 31-inch-diameter BFGoodrich all-terrain tires; Bilstein shocks and full skid plate protection.

Among the available options on the Ranger are a bed extender, Sirius satellite radio and the Tremor Package, which gets its name from its 510-watt Pioneer sound system.

The '07 Ranger lineup includes three engines. The base engine is a 2.3-liter inline four with 143 horsepower and 154 pound-feet of torque. Next up is a 3.0-liter V6 rated for 148 hp and 180 lb-ft of torque. At the top of the engine chart is a 4.0-liter overhead-cam V6 rated for 207 hp and 238 lb-ft of torque. Transmission choices include a standard five-speed manual and an optional five-speed automatic, and most models offer a choice of two- or four-wheel drive. Equipped with the optional Class III towing package, Rangers with the 4.0-liter V6 can pull a maximum of 6000 pounds.

The 2007 Ford Ranger comes standard with four-wheel antilock brakes and a tire-pressure monitoring system. Side airbags are not available. In NHTSA crash testing, the Ranger earned four out of five stars for driver and front-passenger protection in frontal impacts. SuperCabs received four stars for side-impact protection, while regular cabs earned a full five stars in this category. In IIHS frontal offset crash testing, the Ranger earned an "Acceptable" rating (the second highest on a scale of four).

Despite the Ranger's advanced age, cabin ergonomics are solid and front-seat comfort is acceptable unless you're of tall stature. The center console is wide and flat, with dual expandable cupholders and two power outlets for added convenience. SuperCabs can be equipped with an extra pair of access doors and small, side-facing rear jump seats. As you'd expect, these seats are usable only by children and only on short trips.

When equipped with the 4.0-liter V6, the Ford Ranger offers solid acceleration, but it feels underpowered with either the 3.0-liter V6 or the base four-cylinder. Rangers are quite capable off-road, especially when equipped with one of the FX4 packages. Ride and handling characteristics on pavement are tolerable, but when driven back-to-back with newer offerings from Dodge, GM, Nissan and Toyota, the Ranger's age shows.