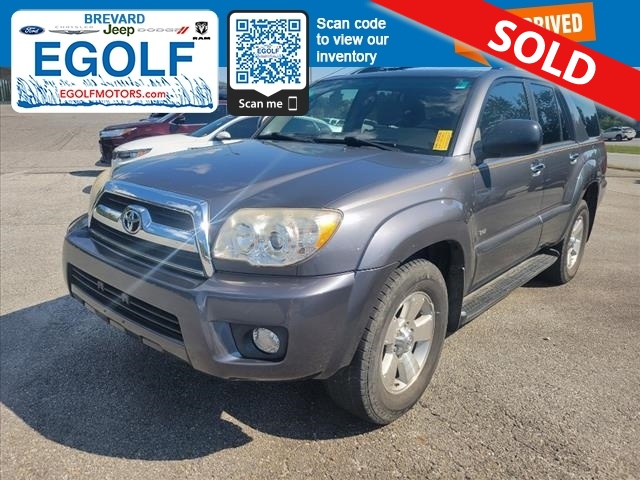 RECENT ARRIVAL ! LOCAL TRADE ! HARD TO FIND ! Call Egolf Motors in Brevard at 828-884-4151 then x 1. Weve been serving customers in Western North Carolina and upstate South Carolina for over 40 years where you feel like family when you walk through the door. Awards: * 2008 KBB.com Brand Image Awards Call Egolf Brevard at 828-884-4151. You make the drive, well make the deal and youll feel like family!

A longtime favorite of ours, the 2008 Toyota 4Runner is a traditional midsize SUV that does just about everything well. Consumers who don't plan on much recreational use, however, would be better served by a top crossover.

The 2008 Toyota 4Runner gets the formerly optional side curtain airbags as standard equipment.

Sport-utility vehicles, if one was to paraphrase George Bush Sr., have become considerably "kinder and gentler" in the past 10 years. And that's been a good thing -- crossover models, with their car-based architecture and on-road-biased handling, are much better suited for the way most consumers use their SUVs. But there are still people who like the idea of owning a traditional truck-based SUV, and for them, there's the 2008 Toyota 4Runner.

The body-on-frame 4Runner, a mainstay of Toyota's lineup since the mid-1980s, still has the expected rugged good looks and true off-road capability of a stout, no-nonsense sport-utility vehicle. This might seem like a misguided philosophy when you consider that few SUV owners actually go off-road, but Toyota looks at the situation a bit differently. It sees the 4Runner's all-terrain capability as a selling point over its rivals. If you want a "soft roader," there are plenty to choose from -- Toyota's redesigned Highlander is a perfect example. But if you want a midsize SUV that doesn't faint at the first sign of dirt, the Toyota 4Runner is still the real deal.

This isn't to say the 4Runner is a feckless choice for urban duty. It drives well, has a powerful V6 or available V8 under the hood, and is reasonably comfortable. But there's no getting away from the fact that it's an older model last redesigned in 2003. Among the old guard of SUVs, the 4Runner still holds its own, though three of its closest competitors, the Jeep Grand Cherokee, Nissan Pathfinder and Dodge Durango, have been significantly updated this year. Compared to most modern crossovers, the 2008 Toyota 4Runner is outclassed in terms of interior space, ride quality and fuel efficiency. SUV shoppers not planning on doing much towing or outdoor recreation would be much better off with something like a Highlander, GMC Acadia or Nissan Murano.

Options include a navigation system, Bluetooth, a rear-seat DVD entertainment system, a premium JBL audio system, a third-row seat and a two-tier cargo shelf. The X-REAS shocks are optional for the Limited and come with a height-adjustable rear air suspension.

The Toyota 4Runner is available with rear- or four-wheel drive and one of two engines. The standard 4.0-liter V6 makes 236 horsepower and 266 pound-feet of torque. The optional 4.7-liter V8 generates 260 hp and 306 lb-ft of torque. All 4Runners get a five-speed automatic transmission. Towing capacity is 7,300 pounds on V8 models, while V6 models top out at 5,000 pounds. Fuel economy estimates for four-wheel-drive 2008 4Runners stand at 16 mpg city and 20 mpg highway for the V6 and 14/17 mpg for the V8.

All models come standard with antilock disc brakes with brake assist, stability control and roll-sensing side-curtain airbags for the first and second rows of seating. Front seat side airbags are also standard. In government crash testing, the 2008 Toyota 4Runner earned four out of five stars in the frontal-impact category and a perfect five stars for side impacts. In Insurance Institute for Highway Safety tests, the vehicle earned a top "Good" rating for its protection of occupants in frontal-offset and side-impact collisions.

The Toyota 4Runner offers roomy quarters for four to five passengers. The optional third-row seat strikes us as an afterthought, however. It provides minimal legroom even for kids and it doesn't fold flat into the floor. Instead, each half of the 50/50 third-row seat must be stowed in an upright position along the sideboards or removed completely if you want to carry cargo. The overall design of the interior is aesthetically pleasing and functional, with most controls easy to find and use. Our only major ergonomic complaint concerns the climate controls, which look like intuitive dials but work more like joysticks. Maximum cargo capacity is 75 cubic feet, which trails behind most of the 4Runner's midsize competitors.

Both engines move the 4Runner out quickly. Although the V8 is a must if you plan on doing any serious towing, most buyers will be happy with the less expensive and more fuel-efficient V6. When driven on pavement, the 2008 Toyota 4Runner delivers a smooth, controlled ride, and handling around turns is surprisingly tight and responsive for a traditional body-on-frame sport-ute. Models with the X-REAS system have their dampers diagonally linked. (The front left damper, or shock, is linked to the rear right and the front right is linked to the rear left.) The system helps improve on-road handling and dampens body roll and pitch. Taken off-road, this Toyota SUV is right at home, tackling steep passes with little drama and delivering an almost luxurious ride even on rutted trails.