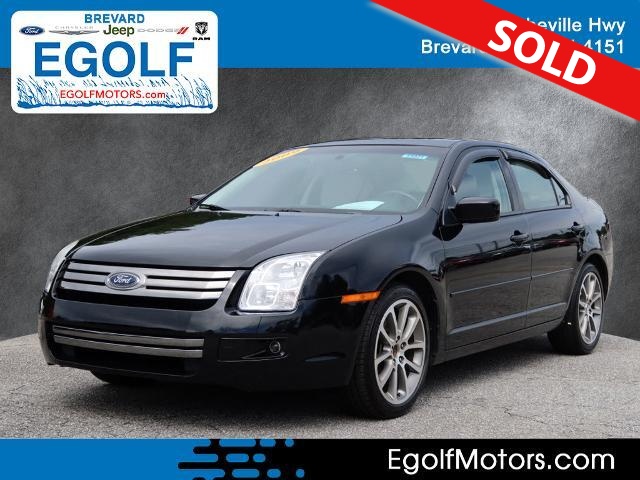 Fusion SE, 4D Sedan, Duratec 2.3L I4, 5-Speed, Black. Call Egolf Motors in Brevard at 828-884-4151 then x 1. Weve been serving customers in Western North Carolina and upstate South Carolina for over 40 years where you feel like family when you walk through the door. Awards: * 2009 KBB.com Brand Image Awards Call Egolf Brevard at 828-884-4151. You make the drive, well make the deal and youll feel like family! Reviews: * If you’re looking for a five-passenger sedan that doesn’t dissolve into obscurity when left in a parking lot, check out the 2009 Ford Fusion. It offers distinctive styling in line with the Chevrolet Malibu and Honda Accord, yet its priced closer to the smaller Honda Civic and Toyota Corolla. Source: KBB.com

The 2009 Ford Fusion has a lot of things going for it, including sporty handling and the nifty Sync MP3 and cell phone interface. Underwhelming powertrains and some unpleasant interior controls, however, relegate the Fusion to being a mid-pack choice for a midsize sedan.

Stability control is now an option on all Ford Fusions for 2009, while traction control becomes standard on all V6-powered models. Other standard equipment includes the addition of ambient lighting on the SEL trim level, and satellite radio on all but the base Fusion. Four-cylinder SEL models get a five-speed automatic transmission. Also new is the Blue Suede Package that features special blue Alcantara interior accents.

Fusion is a trendy trend in the world of fine cuisine. There's Asian fusion, which blends together various aspects of foods from all over the world's largest continent. The other side of the coin is stuff like taco pizzas or chipotle fried chicken. The Ford Fusion puts together the sporty platform found in the last-generation Mazda 6 with the traditional American values of a more spacious interior and brash styling elements. Overall, it's a successful combination, though there are a few taco pizza elements in the mix as well.

Ford's Fusion debuted three years ago. The 2009 model is the best yet, with additional equipment and a snazzy new Blue Suede options package. Most importantly, stability control, something that has been missing on the Fusion since day one, is finally available. This is also the first full year for Ford's Sync system, which allows for control of an iPod, other MP3 players and cell phones via voice commands. Impressively, your cell phone's address book is also wirelessly and automatically transferred to the vehicle. We've found that Sync works very well, and judging by positive consumer feedback, it's definitely a major reason to consider the Fusion.

Underneath the Fusion is a stretched chassis originally developed by Mazda, which imbues in this sedan a sporty character not usually associated with family vehicles, let alone ones endowed with a Blue Oval badge. When equipped with the Sport Appearance Package (and ideally a manually transmission), the Fusion can be justifiably described as fun to drive. On the more practical side of the coin, the Fusion is one of the few midsize sedans that offers all-wheel drive. It can also typically be had for a very reasonable price.

Unfortunately, the 2009 Fusion comes with the same engines as the outgoing Mazda 6: four- and six-cylinder units that are short on power and fuel economy compared to the litany of tough competitors. It's expected that Ford will upgrade the engines (as well as the interior and exterior) next year. Because of these changes, you might want to wait around for a 2010 edition if that's an option. Until then, the 2009 Ford Fusion remains a mid-pack choice in the crowded midsize family sedan field, and we suggest also taking a look at the highly regarded Chevrolet Malibu, Honda Accord, redesigned Mazda 6 and Nissan Altima.

All Fusions come standard with front-wheel drive and a 2.3-liter four-cylinder engine that produces 160 horsepower and 156 pound-feet of torque. A five-speed manual is standard, with a five-speed automatic optional. Fuel economy with the auto is 20 mpg city/28 mpg highway and 23 mpg combined -- hardly impressive considering some competitors match that with their V6 engines.

The optional 3.0-liter V6 engine is available on the SE and SEL trim levels, and it can also be equipped with all-wheel drive. A six-speed automatic is standard. This six-cylinder produces 221 hp and 205 lb-ft of torque, which is about 50 fewer horses than its main competition. Unfortunately, this lesser output offers no fuel economy advantage. With front-wheel drive, the Fusion V6 returns 18 mpg city/26 mpg highway and 21 mpg combined. All-wheel-drive reduces those results by 1 mpg.

Antilock disc brakes, front-seat side airbags and side-curtain airbags are standard on all Fusions. Traction control is standard on V6 models. Stability control is optional on all Fusions this year, though it should be noted that most top family sedans offer this important feature as standard equipment. Reverse parking sensors are optional.

In National Highway Transportation Safety Administration frontal-impact crash tests, the 2009 Ford Fusion earned a perfect five stars for front occupant protection in frontal and side crashes. It received four stars for rear protection in a side crash. In Insurance Institute for Highway Safety frontal-offset and side-impact tests, the Fusion scored "Good" ratings -- the highest possible.

Inside the cabin, ergonomics are a mixed bag. Most controls are easy to use, but the instruments are a bit rudimentary and there's no display for the automatic transmission, forcing the driver to look down at the shifter to confirm gear selection. Depending on the trim level, accents of faux carbon-fiber, wood tone and piano black are sprinkled throughout, and the SEL model offers leather seating with contrasting stitching, an analog clock and steering-wheel-mounted audio and climate controls. The Sport Appearance and Blue Suede packages make the Fusion's cabin quite snazzy.

Although the upholstery is neatly tailored and build quality is above average, the interior's materials are hit or miss. The standard "brick" stereo faceplate with its tiny green readouts is outdated and looks cheap, and seems at odds with the otherwise advanced Sync system.

In its favor, the Fusion's spacious cabin offers plenty of room for all passengers. A pair of adults will be content in the back of the Fusion, and storage space is adequate. An unexpected measure of utility is provided by the Fusion's 15.8-cubic-foot trunk, split-folding rear seat and fold-down front passenger seat (SE and SEL models only), allowing bulky items to be transported inside the car.

With its responsive steering and refined ride, the 2009 Ford Fusion is one of the more entertaining vehicles in the family sedan segment. Wind and road noise are muted at highway speeds, and both automatic transmissions perform competently. If you don't mind shifting for yourself, the standard five-speed manual is actually quite good and pairs much better with the four-cylinder than the auto does. Unfortunately, neither engine offers much off-the-line grunt, and both get a little noisy at higher rpm. Some drivers might also be annoyed at Ford providing just two forward gates ("D" and "L") for the automatic transmission.

More horsepower and an automatic with manual-shift capability would certainly lend support to the Fusion's sporty aspirations, but thanks to its communicative steering and well-planted demeanor, it's still an enjoyable car to drive by family sedan standards. We highly recommend the Sport Appearance or Blue Suede package because of the sport-tuned suspension and 18-inch wheels that increase the Fusion's fun factor even more.