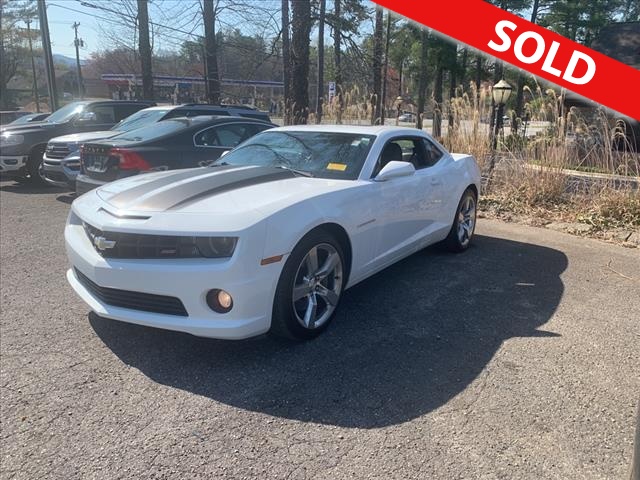 It was worth the wait. With segment-topping performance and value to complement its striking styling, the 2010 Chevrolet Camaro is our top pick among modern-day muscle cars.

After many months of speculation and anticipation, the reincarnated Chevy Camaro makes its debut for 2010.

OK, we're going to get straight to the point here. The 2010 Chevrolet Camaro rocks. After years of anticipation, Chevy's new Camaro not only lives up to the hype but also redefines what a muscle car can be. The traditional stereotype goes something like this -- the affordable base model looks fast but goes slow due to a lumpy V6, while the V8-powered model will do apocalyptic burnouts in the high school parking lot but can't corner to save its (or your) life. The latest Dodge Challenger comes uncomfortably close to this archetype, and the Ford Mustang is at least guilty on the V6 front. But this new Camaro, well, it's an altogether different beast.

Impressively, the new Chevy Camaro is an excellent performance-car value whether it's equipped with the base direct-injected V6 or the optional V8. The V6-powered base Camaro can sprint to 60 mph in 6.0 seconds, thanks to 300 horsepower, yet it costs the same as competitors like the considerably slower Hyundai Genesis Coupe 2.0T. Heck, even the V6's fuel economy is impressive compared to its competition. The V8-powered Camaro SS with the manual transmission dispenses with 60 mph in a blistering 5.0 seconds -- 426 hp will do that for you -- yet it's considerably cheaper than cars like the BMW 135i and Challenger SRT8 and outperforms the slightly more affordable Mustang GT. The Camaro handles smartly, too, with even the base car surpassing the rarefied 68 mph mark on our slalom course.

Riding on a shortened and reworked version of GM's Zeta platform, which it shares with the Pontiac G8 sport sedan, the Camaro boasts an independent rear suspension and refined handling characteristics. The base direct-injected 3.6-liter V6 is the same sophisticated engine that's an extra-cost option on the Cadillac CTS luxury sedan, while the 6.2-liter V8 in the manual-transmission Camaro SS is essentially borrowed from the base Corvette (automatic SS models get a slightly less powerful V8 variant). This is some serious hardware, and as our tests have shown, it really delivers the performance goods.

This isn't to say that Chevrolet has somehow spawned the perfect performance coupe. While appealingly styled, the car's retro-themed exterior and high beltline leave little room for glass, and the resulting gun-slit-like windshield and windows compromise outward visibility to the point that it can be difficult to place the car in tight corners (and parking spots). Another knock against the Camaro is its lackluster interior materials -- they're better than the old Camaro's, for sure, but a couple competing models do it better. There's also the comically small trunk opening (meaning it's hard to load large items into the trunk) and the lack of a factory navigation system.

But will you care? Probably not. In the final analysis, the 2010 Chevrolet Camaro is a car that's no-excuses good. Even the Camaro in V6 automatic trim is no longer something that enthusiasts will snicker at. And with the chest-pounding V8, the Camaro will have the muscle car gods gazing down and beaming. You also get capable handling abilities, retro-cool styling and impossible-to-ignore pricing. The wait is over; the Camaro is here. And yes, it rocks.

The 1SS trades some of the 2LT's luxuries for the power of the 6.2-liter V8. Upgrades include SS-specific exterior and interior styling cues, 20-inch aluminum wheels and Brembo brakes. The 2SS unites the 1SS's sporty styling touches and performance hardware with the 2LT's full list of standard equipment.

There are two optional packages. The Convenience and Connectivity package (1LT only) adds Bluetooth, steering-wheel-mounted audio controls, a USB port, a leather-wrapped steering wheel and shift knob, a cargo net and remote start. The RS package (available on all V6 models except the LS) adds xenon headlights, exclusive 20-inch aluminum wheels and a spoiler, among other exterior enhancements. Other options, depending on trim level, include special exterior graphics and a sunroof (available on all but the LS).

The rear-wheel-drive 2010 Chevy Camaro is powered by either a 3.6-liter direct-injected V6 (LS, 1LT, 2LT) or a 6.2-liter V8 (1SS, 2SS). Both are offered with either a six-speed manual transmission or a six-speed automatic with manual shift control. The V6 is rated at an even 300 hp and 273 pound-feet of torque. The V8 on manual transmission-equipped cars makes a honking 426 hp and 420 lb-ft of torque. Camaro V8s with the automatic have slightly less power (400 hp, 410 lb-ft) but come with a cylinder-deactivation feature for enhanced fuel economy.

In our performance tests of manual-transmission Camaros, we've recorded 0-60-mph sprints of 6.0 seconds with the V6 and 5.0 seconds for the V8. EPA fuel economy estimates are an impressive 17 mpg city and 29 highway for the V6 (18 mpg city with the automatic), and 16 mpg city and 24 highway with the V8 (25 mpg highway with the automatic). These are very impressive fuel consumption figures, particularly given how powerful these engines are.

Standard safety features include antilock disc brakes, stability control, front-seat side airbags and full-length side curtain airbags. Basic OnStar is standard on the LS and 1SS, while the 1LT, 2LT and 2SS receive OnStar with turn-by-turn navigation featuring a graphical display in the gauge cluster.

Muscle cars have traditionally had bland interiors (a trend that continues with the Camaro's Ford and Dodge competition), but the Camaro laudably mixes retro touches like square gauge hoods and the available four-pack of auxiliary gauges with common-sense modern ergonomics. On the downside, there are a few ergonomic annoyances. The steering wheel is overstyled and doesn't fit human hands the way it should; the same goes for the bizarrely shaped manual shift knob. We also dislike the main gauges (they're hard to read) and the dead pedal (it isn't angled properly for comfortable cruising). Other issues include lackluster interior materials quality, the lack of an optional factory navigation system and the Camaro's tiny trunk opening, making loading elongated objects an exercise in frustration (golfers be warned). Backseat comfort is marginal, as you'd expect -- there's a shortage of headroom and legroom, so don't expect to use the rear quarters for more than short trips. The rear seats don't fold down, but there's a trunk pass-through.

The 2010 Chevy Camaro is the no-brainer choice among muscle cars for those who enjoy spirited driving, thanks to its unbeatable combination of big power, ample grip and refined suspension tuning. It's even got enough finesse to give luxury performance coupes like the BMW 135i and Infiniti G37 some competition. We just wish the experience were less like driving a really agile tank, but the Camaro's dramatic exterior styling leaves no other option. The base V6 Camaro feels quick and sounds sophisticated -- a knockout bargain at $22,000 and change -- while the V8 model will deliver tire-evaporating torque along with that classic muscle car roar at full throttle. What's more, for all its performance capabilities, the 2010 Chevrolet Camaro still manages to be quite civil around town and on the highway in terms of both ride quality and wind/road noise.