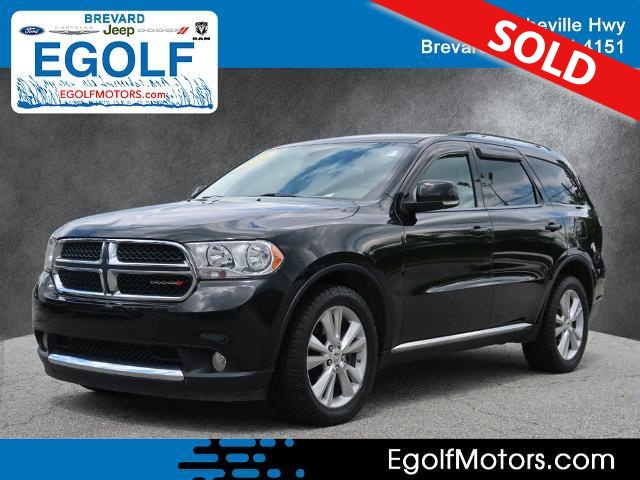 Thanks chiefly to its welcoming interior and athletic yet comfortable handling, the 2012 Dodge Durango is fully competitive against top crossover SUVs.

For 2012, the Dodge Durango gets a few minor improvements. Among them are a six-speed automatic transmission for V8 models, newly available second-row captain's chairs and revised trim levels.

Last year, the Dodge Durango SUV returned to the market after a one-year hiatus. Fully redesigned, the latest Durango is a much different and much better vehicle than the generation that came before. With improved handling and ride dynamics, a nicer interior and a more refined and powerful V6, Dodge's full-size SUV gets a level of respect that the old Durango couldn't have gotten if Nelson Mandela himself was behind the wheel.

As expected, this year's 2012 Dodge Durango has the same positive qualities going for it. We're particularly fond of its sleek styling and upscale cabin. As a large crossover SUV, the Durango can seat up to seven passengers. It is also pretty easy to maneuver and rides well on both the highway and city streets.

Although it cranks out nearly 300 horsepower, the 3.6-liter V6 still boasts relatively good fuel economy numbers. The Durango's specialty, however, lies with its available V8. A nice choice for those who need added muscle for bigger hauling and towing duties, the V8-powered Durango can pull up to 7,400 pounds when properly equipped -- a figure that's more than what most other competitors can manage.

If you don't require such heavy hauling ability but do need three rows of adult-friendly seats, then there are other worthwhile choices to consider. Among them are the Chevrolet Traverse, Ford Flex, Mazda CX-9 and the Durango's most obvious competitor, the recently redesigned Ford Explorer. Honestly, there's not a bad one in the bunch, but if you're looking for a vehicle with sharp styling, lots of features and high recreational abilities, the Durango is an excellent choice.

The R/T essentially includes the upgrades of the Crew (minus the parking sensors and rearview camera) along with a V8 engine, 20-inch alloy wheels, a sport-tuned suspension, body-color accents, xenon headlights, faux-suede upholstery and power driver lumbar support.

Many of the Citadel's luxury features are available on the Crew and the R/T. Options for the whole lineup include second-row captain's chairs, a towing package, a skid-plate package (except R/T) and a rear-seat DVD entertainment system with satellite TV (except SXT).

The 2012 Dodge Durango is offered in several powertrain combinations. You can choose rear-wheel drive, all-wheel drive or four-wheel drive. Except for the V6-only SXT, rear-drive versions offer a choice of V6 or V8 power. The full-time AWD system is only available with the V6 engine. The on-demand 4WD system features dual-range gearing (which makes it more capable on more challenging terrain) and requires the V8 engine.

Standard on all but the R/T is the 3.6-liter V6 engine, which is rated at 290 hp and 260 pound-feet of torque. A five-speed automatic transmission is standard. In Edmunds performance testing, a V6 Durango went from zero to 60 mph in 9 seconds, a bit slower than most competing crossovers. EPA-estimated fuel economy is 16 mpg city/23 mpg highway and 19 mpg combined for the V6 with all-wheel drive.

Optional on the Crew and Citadel, and standard on the R/T is a 5.7-liter V8 good for 360 hp and 390 lb-ft of torque. A six-speed automatic transmission is standard. The AWD V8 is rated at 13 mpg city/20 mpg highway and 15 mpg combined.

Antilock disc brakes, stability and traction control, trailer sway control, front side airbags and full-length side curtain airbags are standard on every 2012 Dodge Durango. The Citadel also comes with blind-spot monitoring and cross-path warning systems, which are both optional on the Crew. In Edmunds brake testing, a Durango Crew came to a stop from 60 mph in 119 feet -- a very good distance for a large crossover.

In Insurance Institute for Highway Safety tests, the Durango earned a perfect "Good" rating for its performance in frontal-offset, side-impact and roof-strength tests.

Modern and functional, the 2012 Dodge Durango's cabin has been designed with family-style versatility in mind. Regardless of trim level, the design is attractive and features upscale materials.

Chrysler's latest batch of digital-entertainment options (a 28GB hard drive, satellite radio and TV) should appeal to both kids and tech-savvy parents; however, the available touchscreen interface isn't the most user-friendly or advanced. The front seats are roomy and comfortable, but the second row has a rather flat cushion (which helps promote a flatter load floor when the seat is folded) and doesn't offer quite as much legroom as roomier rivals. The Durango's easily accessed third row, on the other hand, offers a surprising amount of leg- and headroom (even for 6-footers) and is indeed more spacious than the Ford Explorer's.

With the second- and third-row seats folded down, the Durango can carry up to 84.5 cubic feet of cargo. This is a respectable amount, but competing large crossover SUVs can offer even more rear-passenger and/or cargo space.

The 2012 Dodge Durango is related to the Mercedes-Benz M-Class, and it shows in the way this nearly 5,000-pound vehicle drives down the road. The Durango feels controlled in almost any driving situation, and the responsive nature of the steering makes the Durango easy to maneuver.

Low-end torque is not a strong suit of the V6, but once the Dodge Durango is moving, the engine pulls respectably. Midrange acceleration is adequate for passing and merging and indeed there's little reason to sweat the additional second or two it takes the Durango to reach 60 mph compared to its fleeter rivals. As expected, the V8 offers brisk all-around performance. On a long interstate cruise, the Durango provides a quiet and relaxed cabin environment.