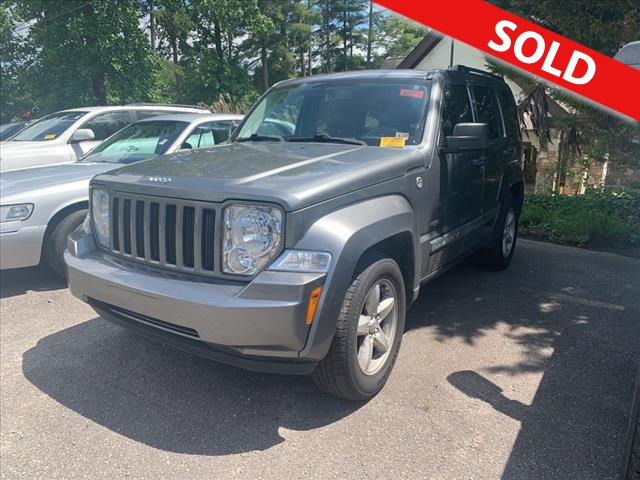 The 2012 Jeep Liberty can certainly hack it in the bushes, but it struggles on the pavement. Interior quality and fuel economy also leave much to be desired.

The 2012 Jeep Liberty gets a new Jet trim level and a new Arctic special edition package, while all models can now be had with rear parking sensors.

Patrick Henry once famously declared, "Give me liberty or give me death." We're really glad he wasn't talking about the 2012 Jeep Liberty, because it's definitely not worth ditching your mortal coil for. Frankly, it's barely worth considering since just about every rival SUV -- be it a commuter-friendly crossover or a dedicated off-roader -- is a better, more well-rounded vehicle.

The problems start with the Liberty's underpowered 210-horsepower V6. While sluggish acceleration is commonplace among compact SUVs, the four-cylinder engines found in models like the GMC Terrain at least boast good fuel economy as a trade-off. It gets even worse with the four-wheel-drive Liberty, which returns 17 mpg combined -- the same as a V8-powered Chevy Tahoe.

One could argue that Chrysler's new V6 found in the Wrangler could help things, but the Liberty's issues don't end there. To call its interior "not up to par" would imply it's playing on the same metaphorical golf course as those it competes against. On the contrary, materials are hard and cheap, the look is drab, the seats are flat and the wheel doesn't telescope, just to name a few offenses. An upgrade to the sort of interior quality seen in the impressive new Jeep Grand Cherokee can't come soon enough.

Now, it's true that the Liberty is a rugged compact SUV with the four-wheel-drive chops to get you way off the beaten path. In this way, the Liberty will look pretty good. Properly equipped, the Liberty has significantly more off-road capability than models like the Terrain or Honda CR-V and probably more than most buyers are ever likely to need.

But if it's off-road potential you want, you're probably going to be better off with the Nissan Xterra and Toyota FJ Cruiser. They're typically a little more expensive, but they offer superior off-road capabilities, better on-pavement performance and nicer interiors. Plus, if you're looking for serious off-road potential, Jeep's own Wrangler is the more obvious choice.

Ultimately, as much as we respect the 2012 Jeep Liberty for its off-road capability, we continue to have a hard time recommending it until it undergoes a redesign. In the meantime, we suggest looking at the Subaru Forester or all-wheel-drive versions of the GMC Terrain, Honda CR-V or Toyota RAV4.

The 2012 Jeep Liberty is offered in three trim levels: Sport, Limited and a new Jet model.

The Limited includes all of the above optional equipment from the Sport along with 17-inch alloy wheels, exterior chrome trim and an eight-speaker Infinity audio system. An available Tire and Wheel Group includes 18-inch chrome alloy wheels. The new Jet trim level gets you 20-inch polished alloy wheels, rear parking sensors, distinctive exterior/interior trim and a security alarm.

Every trim is available with a towing package, a panoramic cloth sunroof (Sky Slider), a traditional sunroof, rear parking sensors and an upgraded sound system (named Media Center 430) that includes a touchscreen interface, DVD audio playback and 28GB of digital music storage. A Garmin-powered navigation system with real-time traffic can be added to the Media Center 430 on the Sport. The Limited and Jet can be equipped with the Media Center 730, which is similar but features a Chrysler-sourced navigation system. The Limited and Jet can also be equipped with the Comfort/Convenience Group, which adds automatic climate control and remote ignition.

The 2012 Jeep Liberty is powered by a 3.7-liter V6 that produces 210 hp and 235 pound-feet of torque. A four-speed automatic is the only transmission offered. Rear-wheel drive is standard and there are two different four-wheel-drive systems available, including the part-time Command-Trac and the full-time Selec-Trac. A properly equipped Liberty can tow as much as 5,000 pounds.

In Edmunds performance testing, a 4WD Liberty Limited went from zero to 60 mph in a sluggish 10.2 seconds. EPA fuel economy estimates are 16 mpg city/22 mpg highway and 18 mpg combined with two-wheel drive and 15/21/17 with four-wheel drive -- both sets are pretty disappointing considering the Liberty's sluggish acceleration.

The 2012 Jeep Liberty comes standard with antilock disc brakes, stability control, active front head restraints and side curtain airbags. Rear parking sensors are available as an option, but front-seat side-impact airbags are not even offered. In Edmunds brake testing, the Liberty came to a stop from 60 mph in a longer-than-average 134 feet.

The Insurance Institute for Highway Safety gave the Liberty its top mark of "Good" in the frontal-offset and roof strength tests. In the organization's side-impact test it earned the second-lowest "Marginal" rating.

Inside the 2012 Jeep Liberty you'll find a utilitarian interior design made even more uninspiring with the use of cheap-feeling hard plastics. Front and rear seats aren't particularly comfortable and the tilt-only adjustable steering wheel may make it hard for some drivers to find a good driving position. Standard climate and audio controls are at least well-placed and intuitive, but the optional audio system can be fussy to use due to its small touchscreen controls.

There's also a good amount of road and wind noise, which can grow tiresome on longer drives. The available cloth Sky Slider oversize sunroof is a unique feature and seals out the elements better than you'd expect. The cargo hold offers an average amount of space, with 31.5 cubic feet behind the rear seatbacks and 64 cubic feet with them folded down.

On the road the 2012 Jeep Liberty offers a tolerable if somewhat truckish ride quality. Its suspension clearly isn't well-calibrated for the street, resulting in sloppy handling with noticeable amounts of body roll. The 3.7-liter V6 doesn't help matters; it's noisy and offers lackluster acceleration. Leave the pavement behind, however, and the Liberty feels much more at home, offering the ability to take on surprisingly rugged trails. Those trails had better not be dark, though, because we've found the Liberty's headlights to be notably poor.