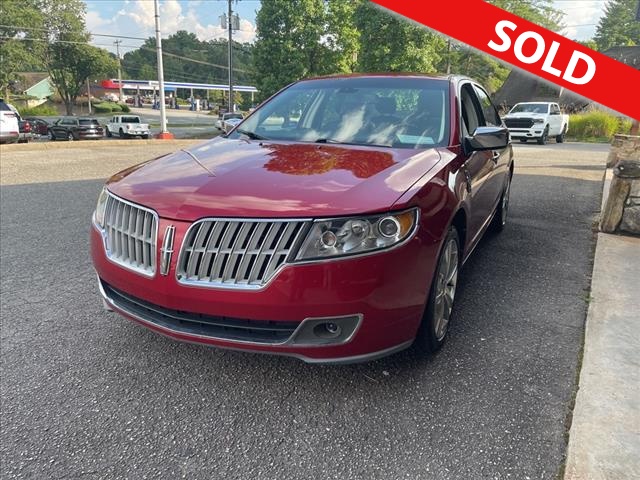 The 2012 Lincoln MKZ is a competent midsize premium sedan, but it does not represent enough of an improvement over the similar Ford Fusion to justify its Mercedes-like price.

The Lincoln MKZ returns unchanged for the 2012 model year.

As much as we disliked the subject in school, there are times in the course of evaluating cars when we find it necessary to step back and do a little math. After putting our pencils to the 2012 Lincoln MKZ, we conclude that things just don't add up.

To be sure, the midsize MKZ sedan has a number of good qualities, including decent handling, an attractive and comfortable interior and a long list of available high-tech doodads. The problem is that the littlest Lincoln still just doesn't feel as substantial or polished as you'd expect an entry-level luxury sedan to be.

To get a better handle on this equation, it helps to understand the MKZ is actually a rebadged version of the mass-market Ford Fusion sedan. Nothing wrong with that per se, as the Fusion is one of our favorite midsize sedans. So good in fact, that Lincoln's engineering team made relatively few changes under the skin.

The problem, of course, is that it takes a lot more than a few exterior styling tweaks and interior upgrades to compete in a category full of excellent luxury sedans, which ultimately leads us to conclude the MKZ just doesn't compute.

This is especially true when you consider just how many excellent cars there are to choose from in this price range. Specifically, we'd recommend cross-shopping the 2012 Audi A4, 2012 BMW 3 Series, 2012 Cadillac CTS, 2012 Hyundai Genesis, 2012 Infiniti G37, 2012 Lexus ES 350 and 2012 Mercedes-Benz C-Class, all of which show more attention to detail and a greater degree of engineering excellence.

The lone exception to this sentiment is the Hybrid version of the MKZ, which offers fuel-sipping powertrain technology that's not available in the others. Perhaps the smaller 2012 Lexus HS 250h (hybrid) might be considered a competitor to the MKZ Hybrid, but the Lincoln bests it in both passenger space and fuel economy. However, it should be noted that the less expensive 2012 Ford Fusion Hybrid is essentially the same car as its upscale Lincoln cousin -- albeit without the fancier styling and plusher cabin trimmings.

In sum, the 2012 Lincoln MKZ is a good car that represents the best of the Ford Fusion's attributes, combined with a compelling array of luxury features. But, unless you're considering the Hybrid, it just isn't the equal of its competition.

The 2012 Lincoln MKZ is a midsize luxury sedan that's offered in two trim levels -- base (V6) and Hybrid.

Options include a Navigation package that bundles the expected navigation system with a rearview camera, a blind-spot warning system, a single-CD/DVD audio player, digital music storage capability, HD radio and Sirius Travel Link service. On the Hybrid, the Navigation package also includes a premium surround-sound audio system. The Ultimate package features all the above (including the premium sound) and adds 17-inch chrome wheels, a sunroof (also available as a stand-alone option), adaptive xenon headlights, rain-sensing wipers and ambient lighting.

The 2012 Lincoln MKZ is powered by a 3.5-liter V6 that puts out 263 horsepower and 249 pound-feet of torque. A six-speed automatic transmission with manual shift control is standard. Lincoln offers the MKZ in either front-wheel drive or all-wheel drive.

Fuel economy is respectable, with EPA estimates of 18 mpg city/27 mpg highway and 21 mpg combined for front-wheel-drive models and 17/24/19 for all-wheel-drive versions. In Edmunds performance testing, an all-wheel-drive MKZ accelerated from a standstill to 60 mph in 7.2 seconds, which is a midpack time in this segment of entry-level luxury sedans.

The MKZ Hybrid is motivated by a 2.5-liter four-cylinder gasoline engine teamed with an electric motor that together make 191 hp. Power is sent to the front wheels via a continuously variable automatic transmission (CVT). EPA estimates stand at 41/36/39 mpg. Though we haven't tested an MKZ Hybrid, we did test the similar Ford Fusion Hybrid, which ran from zero to 60 mph in 8.7 seconds, which is reasonably quick for a hybrid.

In government crash tests, the MKZ earned an overall rating of four stars (out of a possible five), with a three-star rating for frontal impacts and four stars for side impacts. The Insurance Institute for Highway Safety gives the MKZ its top "Good" rating in both frontal-offset and side-crash tests. In Edmunds brake testing, an MKZ Sport came to a stop from 60 mph in 132 feet -- which is longer than expected from a luxury sedan.

The 2012 Lincoln MKZ's passenger cabin gets some nice feature upgrades and better materials than those found in its Ford Fusion cousin. That said, the interior seems more like something you'd find on a top-of-the-line mainstream sedan than a car meant to compete with European luxury marques like Audi, BMW and Mercedes-Benz.

On the upside, the seats are comfortable and both front and rear seat passengers enjoy a good amount of head- and legroom. Out back is an equally generously sized trunk, with 16.9 cubic feet of cargo capacity in the base model; the Hybrid has only 11.8 cubic feet, due to the battery pack that intrudes into the trunk space.

The MKZ's range of available technology is another positive here, especially the navigation system's Sirius Travel Link service. Audiophiles will also want to make sure to give the excellent THX surround-sound system a listen.

Behind the wheel, the 2012 Lincoln MKZ is perfectly competent, if not very exciting, which makes it a good match for buyers looking for a quiet and comfortable luxury sedan. The V6 offers decent acceleration, though the exhaust note lacks the throaty growl of some of its competitors. The Hybrid provides relatively brisk performance as well as composed handling that's similar to that of the non-hybrid version.

Add the sport-tuned suspension and 18-inch wheels that come with the available Sport Appearance package (not available on the Hybrid), however, and things get a bit more interesting. In fact, the MKZ becomes downright fun to drive. The trade-off to this firmer suspension setup, of course, is a rough ride that doesn't feel particularly Lincoln-esque.