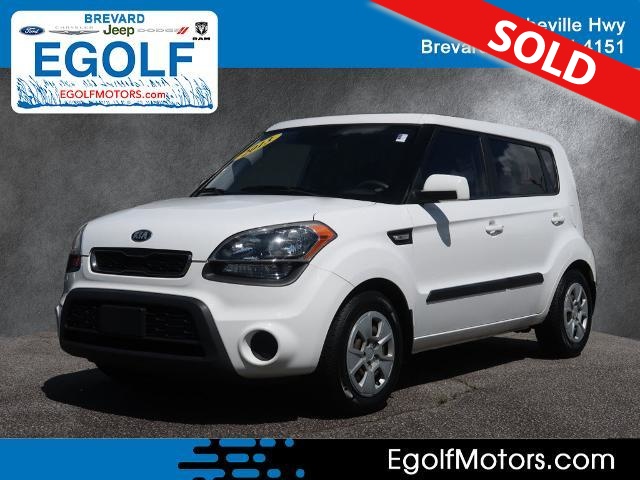 The 2013 Kia Soul brings hipster styling and a fun-to-drive nature to the realm of the practical hatchback.

For 2013, the Kia Soul sees just a handful of minor changes, which include newly standard Bluetooth connectivity for the manual-transmission base model, power-folding outside mirrors for the "!" trim level and revised Kia badges for all.

The 2013 Kia Soul might be inexpensive, but this certainly doesn't mean it's cheap. Even for the entry-level model, you get solid build quality, a peppy direct-injected engine and an audio system that boasts satellite radio and an iPod hookup. Available two-tone interior color schemes, houndstooth-print upholstery and illuminated audio speakers bring welcome touches of personality not expected from cars in this price range. Furthermore, the more expensive versions of Kia's crossover offer even stronger performance.

As expected, the Soul scores well in the EPA's fuel economy testing, and an optional Eco package allows the 2.0-liter engine to achieve nearly the same mileage estimates as the 1.6-liter. The magic happens thanks to low-rolling-resistance tires and stop/start technology that automatically shuts off the engine when you come to a stoplight and restarts it as soon as you lift your foot off the brake pedal.

With such a compelling blend of style, practicality, affordability and features -- and let's not forget its 10-year/100,000-mile powertrain warranty -- the 2013 Kia Soul stands firm as one of our top picks for a small hatchback. That said, there are other choices you might want to check out. If even greater cargo capacity is a top priority, we'd suggest checking out the Scion xB and Honda Fit. And if fuel economy or handling are at the top of your list, other good candidates include the Chevy Sonic and Ford Fiesta. But if you're looking for a car that's both funky and practical, it's hard to beat this overachieving little Kia.

The 2013 Kia Soul is a four-door hatchback available in three punctuation-inspired trim levels: base, + and !.

The front-wheel-drive Kia Soul is offered with two different engines. The base Soul gets a 1.6-liter four-cylinder with 138 horsepower and 123 pound-feet of torque. A six-speed manual transmission is standard (including a hill-start assist function) and a six-speed automatic is optional. EPA mileage estimates stand at 25 mpg city/30 mpg highway and 27 mpg combined regardless of transmission choice.

Soul+ and ! models get a 2.0-liter four-cylinder that puts out a healthy 164 hp and 148 lb-ft of torque. Transmission choices are the same as the base model, but the Soul! is automatic only. In Edmunds performance testing, a Soul! went from zero to 60 mph in 8.8 seconds -- a strong time for this class. EPA-estimated fuel economy is 23/28/25 with the automatic and 24/29/26 with the manual (or if equipped with the Eco package). All of the Soul's fuel economy estimates are better than other funky hatchbacks like the Nissan Cube and Scion xB, but fall a bit short of more conventional small hatchbacks.

In Edmunds brake testing, a Soul! came to a stop from 60 mph in 120 feet, which is a slightly shorter than average distance for this segment.

Just because the 2013 Kia Soul is long on style doesn't mean it's short on practicality. With its modern look and pronounced center stack, the passenger cabin offers a nice balance between form and function. Quality materials and a useful amount of acoustic insulation help make the interior seem refined and relatively quiet, while details like the available two-tone houndstooth upholstery give the Soul more flair than similarly priced competitors.

Gauges and controls are logically located and intuitive to use, even when you take into account high-tech options like the voice-controlled Uvo infotainment system that allows you to control your cell phone, iPod and more with voice commands. The optional Infinity audio system's illuminated trim rings for the speakers flash to the beat of the music, and it's kind of fun.

One of the benefits of the Soul's boxy design is abundant head- and legroom, even in the backseat. Behind the rear seatbacks is 19 cubic feet of cargo room, which grows to 53 cubic feet with both sections of the 60/40-split rear seatbacks folded down. This is on par with many competitors, but those who need maximum schlepping capacity should consider the Scion xB's cavernous 70-cubic-foot cargo hold.

With plenty of power on tap, the 2013 Kia Soul is enjoyable around town and confident when merging onto a freeway. However, while there's ample power with the 1.6-liter engine, we still think most buyers will be happier with the gutsy 164-hp 2.0-liter, especially since the difference in fuel economy is so small. Both the six-speed manual and automatic transmissions are well-matched to either engine.

In terms of handling, the Soul doesn't offer the sort of zippy agility found in the Chevy Sonic or Ford Fiesta, but the Kia isn't a soft snooze-mobile like the Nissan Cube either. The steering has a reassuring weightiness to its effort level at highway speeds, while the response proves crisp and linear on a twisting road. The brake pedal has a reassuringly firm feel. The ride is a bit firm over bumps and ruts, especially on models fitted with the handsome 18-inch cast-aluminum wheels.