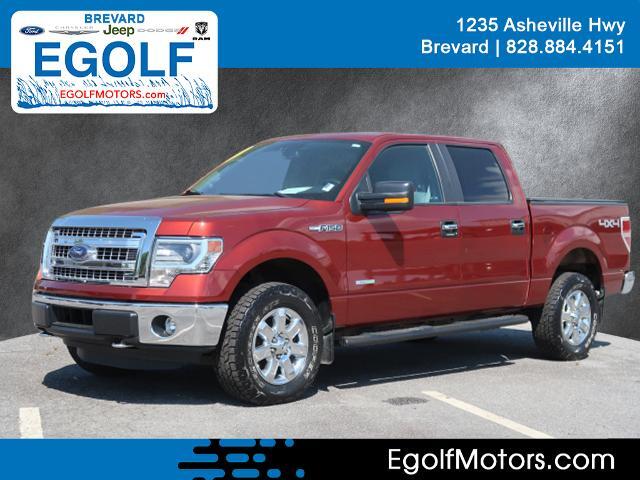 The 2014 Ford F-150 is offered in a substantial array of trims and powertrains to accommodate all manner of towing, hauling or off-road needs. Although it's not the freshest full-size truck out there, it remains a must-drive for shoppers.

Other than a few minor changes to equipment and options, the 2014 Ford F-150 carries over unchanged.

When you're shopping for a full-size pickup truck, you quickly realize how evenly matched the players are: Cab styles, engines and towing capacities are all pretty similar across the board. Yet the sheer variety within the Ford F-150 lineup has always set this truck apart from its rivals. You can choose a stripped-down work truck, lather on the luxury with plush versions like the King Ranch, or equip your 2014 F-150 as a serious off-roader via the specialized SVT Raptor model. Whatever your tastes, you're almost certain to find a 2014 Ford F-150 that meets your needs.

The customization starts in the engine bay of the Ford F-150, which has four available power plants, ranging from a base V6 to a 6.2-liter V8. All are worthwhile choices, but the most compelling option is the midrange EcoBoost 3.5-liter V6 engine: It makes as much torque as most V8 engines and provides equivalent towing capacity. And if you drive your truck every day, you'll be happy to know this is also the most fuel-efficient of the available F-150 engines.

Inside, the 2014 F-150 offers plenty of room, particularly in the popular SuperCrew body style, and you can equip it with all manner of modern conveniences, including a rearview camera, dual USB ports, an integrated trailer-brake controller and a voice-activated navigation system (although, for many drivers, the complexity of the MyFord Touch interface takes away some of the convenience). In other respects, though, the Ford is starting to show its age. Interior materials quality is only so-so, and extended-cab models (SuperCabs, that is) still have cumbersome, reverse-hinged rear doors, whereas most other trucks have adopted front-hinged doors.

As minor as these issues might seem, it's worth your while to check out the F-150's competition. The 2014 Ram 1500 is a favorite of ours, given its top-grade interior and ultra-refined ride quality, and this year it's available with a class-first turbocharged diesel V6 engine. Meanwhile, the recently revamped 2014 Chevrolet Silverado (and its GMC Sierra 1500 twin) has an impressive new interior of its own and one of the best V8 engines in the full-size truck class. If towing or hauling is your main priority, the Toyota Tundra is plenty capable as well, though it doesn't come in nearly as many configurations as the others.

The 2014 Ford F-150 is a full-size pickup truck available in regular cab, extended cab (SuperCab) and crew cab (SuperCrew) body styles. Regular and SuperCabs are offered with either a 6.5-foot or 8-foot cargo bed, while SuperCrews can be had with 6.5- or 5.5-foot beds. The SVT Raptor model (SuperCab or SuperCrew) is available only with the 5.5-foot bed.

The STX includes all of the above, along with alloy wheels, additional body-colored exterior trim, power-adjustable windows, rear power windows for the SuperCab, cruise control, cloth upholstery, a CD player and an auxiliary audio jack.

Many of the upper-trim features are available on supporting models as options. Other add-ons include Ford's Work Solutions system, payload and towing packages, a cargo management system and a stowable bed extender.

Buyers can choose among four different engines depending on the model selected, but every engine is mated to a six-speed automatic transmission. Rear-wheel drive is standard across the board, with four-wheel drive available as an option, except for the Raptor, which is 4WD only.

The F-150's maximum tow ratings range from 6,700 pounds with the 3.7-liter V6 all the way up to 11,300 pounds with the 6.2-liter V8 and turbo V6 (when properly equipped with a tow package and the appropriate axle ratio). It's important to keep in mind that published tow ratings don't necessarily reflect real-world driving conditions. In Edmunds testing, a 2013 F-150 SuperCab with 2WD and the base V6 had all it could handle with a 5,800-pound trailer. Shoppers who plan to tow regularly will likely prefer the EcoBoost V6 or 6.2-liter V8.

In government crash tests, the 2014 Ford F-150 received an overall rating of four out of five stars. It garnered a five-star rating for overall side-impact protection and earned four stars for frontal protection (three stars for the SuperCrew). The Insurance Institute for Highway Safety gave SuperCrew models a top rating of "Good" in its moderate-overlap frontal-offset, side-impact and roof-strength tests. The F-150's seat/head restraint design was also rated "Good" for whiplash protection in rear impacts.

In Edmunds brake testing, regular F-150 models came to a stop from 60 mph in a range of 120-130 feet. The heavier Raptor with its off-road-oriented tires stopped in a much longer 143 feet.

The 2014 Ford F-150 is well suited to life as a work truck. It can be equipped to perform a variety of work- and recreation-related chores, and little details like the clever tailgate step, trailer sway control, box side steps and the Work Solutions options make life easier for the owner. That said, the cabs are starting to show their age. Materials quality is a step down from the Silverado and Ram 1500, and neither the controls nor the instrumentation look or feel state-of-the-art anymore.

The available MyFord Touch interface also presents some challenges. The large touchscreen certainly makes the Ford's cabin look higher tech, and it adds genuine functionality for smartphone users. Unfortunately, the system is prone to glitches and its sheer complexity makes it distracting to use while driving.

On the upside, passenger space remains a strength of the 2014 F-150. The F-150 SuperCrew is nearly as spacious for cargo and passengers as the cavernous Toyota Tundra CrewMax. It offers superb backseat comfort thanks to abundant legroom, a flat floor and a seatback angle that's pleasantly reclined. The SuperCab is still fairly roomy, but legroom is noticeably less generous and opening its rear-hinged clamshell doors is a hassle compared to the more convenient front-hinged doors on rival extended cabs.

The Ford F-150 really stands out with its engine selection. Even the base V6 produces respectable acceleration, while the turbocharged EcoBoost V6 offers an impressive combination of power, capability and efficiency. The V8s are plenty strong, too, and the 5.0-liter V8 is comparatively efficient. Still, our money would go to the turbocharged V6.

Regardless of engine, the 2014 Ford F-150 delivers the sort of ride and handling you'd expect from a pickup. If it's the only truck you test-drive, you'll probably be quite happy. However, should you drive it back to back with the Ram 1500 or Silverado, the Ford is likely to feel more "trucky" and less confidence-inspiring. You feel the bumps and ruts more over rough pavement, the steering can be vague and there's less overall composure when towing.

Of course, the purpose-built SVT Raptor stands apart from the rest as the halo truck that off-road enthusiasts dream about. It can tame some of the toughest terrain around, but it's also a bit trickier to drive around town due to its wide body and higher ride height.