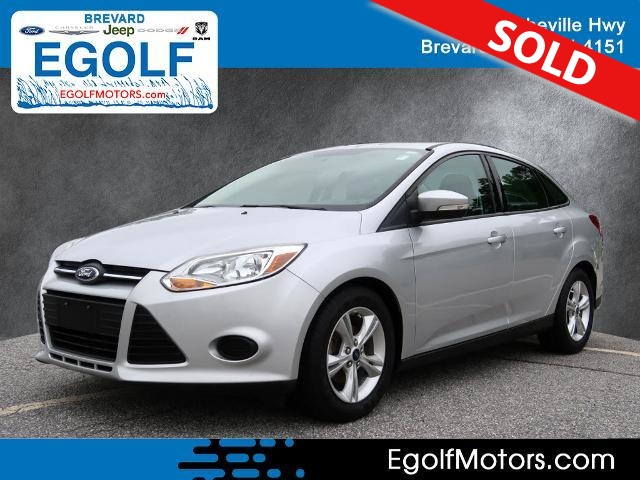 4D Sedan, 2.0L 4-Cylinder DGI DOHC, ABS brakes, Air Conditioning, Alloy wheels, Power Moonroof, SIRIUS Satellite Radio. Call Egolf Motors in Brevard at 828-884-4151 then x 1. Weve been serving customers in Western North Carolina and upstate South Carolina for over 40 years where you feel like family when you walk through the door. Odometer is 32365 miles below market average! Awards: * 2014 IIHS Top Safety Pick * 2014 KBB.com Brand Image Awards Call Egolf Brevard at 828-884-4151. You make the drive, well make the deal and youll feel like family! Reviews: * * Available as sedan or hatchback * Choice of conventional gasoline engine or all-electric model * Nimble driving manners * Good fuel efficiency Source: KBB.com * Nimble handling; refined and quiet ride; strong engine; stylish and well-made interior; abundant list of upscale and high-tech options. Source: Edmunds * Driving the 2014 Ford Focus is incredibly fun and enjoyable. It has a dynamic design, addictive driving experience, and an interior that immerses you into something that is definitely more than just a car. The Focus comes in 7 models to pick from: the Base S Sedan, SE Sedan, SE Hatch, Titanium Sedan, ST, Titanium Hatch, and Electric. New for 2014, theres a Sport Appearance Package for the SE, which has sport cloth seats, a leather-wrapped steering wheel and shift knob, and an available rear spoiler. Every drop of fuel is effectively used in the Focus with its 2.0L engine. Twin independent variable camshaft timing adds extra precision, contributing to fuel efficiency or power output. The electric power-assisted steering contributes to fuel efficiency as well. Plus, Active Grille Shutters help Focus make itself even more aerodynamic and fuel-efficient. This all helps Focus SE with the SFE Package achieve up to 40 MPG HWY, which equals less stops at the pump. For entertainment, theres SYNC with MyFord Touch, standard on Titanium and Electric trims, and optional on SE and ST. On select models, lux

For 2014, the Ford Focus is essentially unchanged.

Introduced at the turn of the century, the first Ford Focus was a pretty good car. It was fun to drive, versatile and available in a wide range of body styles. But as the years went on, newer and more polished rivals relegated it to mid-pack status. Not so with the current-generation Focus, which debuted for 2012 and ranks among the best picks in the compact car segment. Major reasons to consider the 2014 Ford Focus sedan and hatchback include sprightly performance, an upscale interior, a refined ride and excellent fuel economy.

Another key attribute is the Focus' abundance of available high-tech convenience features. One such luxury-like standout is the automated parallel parking system that can neatly slip the car into a curbside spot without the driver ever touching the steering wheel. And of course there's Ford's Sync system, one of the first voice control systems to be offered in any car. The MyFord Touch interface (which consists of configurable control screens), meanwhile, has drawn mixed reviews. Upon its debut, the system was rather finicky to use, and although Ford has improved it through software updates, it remains slow and prone to glitches.

Even if technology isn't a priority for you, the fact that Ford offers a choice of hatchback and sedan body styles, as well as a wide range of trim levels, should give the Focus plenty of appeal. There are even all-electric and high-performance variants. The former, the Focus Electric, is propelled by a 107-kilowatt (143-horsepower) electric motor and can be recharged in about four hours from a 240-volt power source. Owners of the electric Focus can keep tabs on its charging state via smartphone integration. (The high-performance Focus ST is covered in a separate review.)

Well rounded as it is, the 2014 Ford Focus still faces some serious competition in the economy sedan and compact hatchback class. If you're looking at mainstream models, you might also want to consider the well-made Chevrolet Cruze, stylish Kia Forte and sprightly Mazda 3. For electric vehicles, the established Leaf and efficient Honda Fit EV are natural competitors. Yet even in this solid grouping, the Ford Focus impresses. This sophisticated, highly refined and fun-to-drive small sedan and hatchback earn one of the highest compliments we can pay any car: They look and feel as if they should be priced higher.

The 2014 Ford Focus is a compact car that's available in sedan and four-door hatchback body styles. There are three main trim levels available -- S, SE and Titanium -- as well as the Focus Electric. The high-performance Focus ST is reviewed separately.

The S model, which is only offered as a sedan, comes with 15-inch steel wheels, keyless entry, air-conditioning, power front windows, power locks and mirrors, a height-adjustable driver seat, a tilt-and-telescoping steering wheel and a four-speaker sound system with a CD player and auxiliary audio jack.

Move up to the SE and you get 16-inch alloy wheels, automatic headlights, cruise control, power rear windows, a trip computer, Bluetooth phone and audio connectivity, a six-speaker sound system, Ford's Sync voice-activated phone and audio player interface, and steering wheel-mounted audio controls. The hatchback is pretty similar but gets a 60/40 split-folding seatback (versus one solid folding seatback) and a removable cargo cover.

Spring for the Titanium model and you get the contents of the SE Appearance package, the Winter package and the MyFord Touch packages (minus navigation) as standard. The Titanium also has upgraded exterior and interior trim, rear parking sensors, remote start (automatic-transmission models only) keyless ignition/entry and a rearview camera.

The Focus Electric (BEV) is equipped similarly to the Titanium, although leather upholstery and the power driver seat are optional. The Electric gets exclusive xenon headlamps and LED taillamps as standard.

The front-wheel-drive 2014 Ford Focus has a 2.0-liter four-cylinder engine that puts out 160 hp and 146 pound-feet of torque. The S and SE models get a five-speed manual transmission standard, while a six-speed automatic (technically, it's a dual-clutch automated manual) that Ford calls "Powershift" is optional. The automatic comes standard on the Titanium, though the manual transmission is still available as a no-cost option.

In Edmunds performance testing, a Focus Titanium with the automatic went from zero to 60 mph in 8.7 seconds -- a bit quicker than average for this segment. With the manual, that drops to 8.3 seconds.

The Focus Electric has a 107-kilowatt (143 hp) electric drive motor that draws power from a 23kWh lithium-ion battery pack. Power is sent to the front wheels through a single-speed direct-drive transmission. In Edmunds performance testing, the Electric went from zero to 60 mph in 9.6 seconds, which is about the same as the Leaf but slower than the Fit EV.

Standard safety features include antilock brakes (rear drums on S and SE; rear discs on others), stability control, front side airbags and side curtain airbags. The Ford Sync system, which is available on all Focus models, also includes an emergency crash notification feature that automatically dials 911 when paired with a compatible cell phone. Ford's MyKey system, which can be used to set certain parameters for teen drivers, is standard on every Focus except the S sedan. A rearview camera comes standard on the Focus Titanium.

In Edmunds brake testing, a Focus Titanium with the Handling package and summer tires came to a stop from 60 mph in 110 feet, an impressive performance. A Focus with the SFE package stopped in 117 feet, which is also impressive considering its low-rolling-resistance tires. A regular Focus SE with rear disc brakes and standard all-season tires stopped in a below-average 130 feet. The Electric took 126 feet.

While the handsome exteriors of this sedan and hatchback might hook you initially, it's the upscale cabin that will reel you into the Focus fold. The interior is attractive and quiet, and the materials are among the best in this class. However, the layout of audio controls is a little complicated, even on the lower trim levels.

It doesn't get much better with the optional MyFord Touch system, either. The large touchscreen (combined with the truly useful Sync voice command system) looks classy and provides some neat customization possibilities. But in real-world operation, we've found that the virtual buttons are difficult to identify at a glance, and too often get pressed accidentally or fail to respond properly. Make sure to try this out on a test-drive and plan on taking some time to learn the menus if you buy a 2014 Focus.

The front seats are supportive and comfortable over long distances. The rear seats offer adequate headroom, but come up a little short on legroom compared to the accommodations in the Honda Civic and Volkswagen Jetta. The sedan's 13.2-cubic-foot trunk is on par for this class, but the hatchback model is still the better choice for the practical-minded. The latter provides 23.8 cubic feet of space with the 60/40-split rear seats up and 44.8 cubic feet with them folded down. The Focus Electric hatchback, because of its rear-mounted battery pack, drops to 14.5 cubic feet behind the rear seats and 33.9 cubic feet total.

The 2014 Ford Focus feels like a European car in the way it's been tuned to provide both sharp handling and a refined ride. This is one of the more entertaining economy cars to drive around turns, particularly if you've got the Titanium model with the optional Handling package. Yet the Focus is also smooth riding and quiet on the highway.

The 2.0-liter engine isn't quite as much of a standout, but it offers above average performance and fuel economy. The five-speed manual transmission works well enough and gives the car a sportier feel, though we wish it had a 6th gear to lower engine speed while cruising at higher speeds.

The automatic has that extra gear, though buyers should note that it's technically a dual-clutch automated manual and thus behaves a little differently from a traditional automatic. It occasionally allows the car to roll back slightly on hills and can be reluctant to let the car creep forward when parking. But most drivers will acclimate to its quirks and appreciate the fuel economy and acceleration benefits that come with it.

You won't find any such issues with the 2014 Ford Focus Electric. Its electric motor and direct-drive transmission result in silky smooth power delivery. Acceleration is impressive at low speeds, but tapers off considerably as speeds rise. Ford put in extra effort at making the Focus Electric quiet, and indeed this is one of the quietest small cars you'll find. Handling is noticeably dulled compared to a non-electric Focus, but compared to other EVs, the Focus Electric makes a good showing.