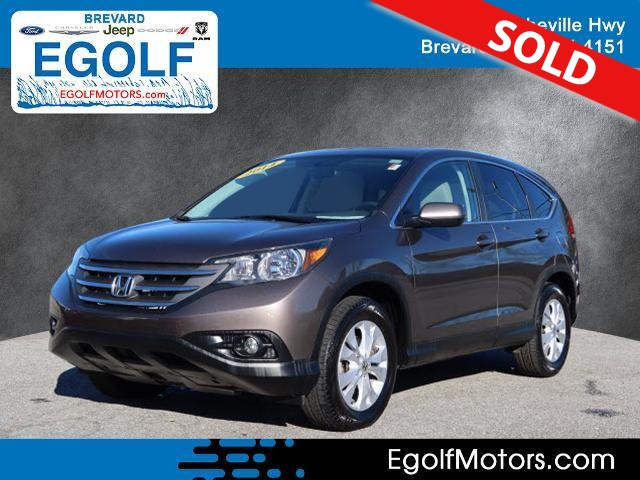 CR-V EX, TRADED HERE ! BACK UP CAMERA, BLUETOOTH ! GREAT VALUE, GREAT ON GAS ! GREAT PRICE ! THIS ONE WILL NOT LAST ! Call Egolf Motors in Brevard at 828-884-4151 then x 1. Weve been serving customers in Western North Carolina and upstate South Carolina for over 40 years where you feel like family when you walk through the door. Odometer is 20558 miles below market average! 23/31 City/Highway MPG Awards: * 2014 KBB.com Brand Image Awards Kelley Blue Book Brand Image Awards are based on the Brand Watch(tm) study from Kelley Blue Book Market Intelligence. Award calculated among non-luxury shoppers. For more information, visit www.kbb.com. Kelley Blue Book is a registered trademark of Kelley Blue Book Co., Inc. Call Egolf Brevard at 828-884-4151. You make the drive, well make the deal and youll feel like family! Reviews: * The 2014 Honda CR-V is as comfortable mushing through unplowed streets as it is circling the flea market ready to haul home some vintage antiques. Excellent fuel economy, a very reasonable price, and a near flawless repair record should seal the deal. Source: KBB.com * Abundant passenger and cargo room; good fuel economy; user-friendly controls; ample standard tech features; strong crash test scores. Source: Edmunds * The 2014 Honda CR-V has a modern aerodynamic look, with sweeping lines, exciting body sculpting, and a dramatic profile. It has enough attitude and ability to get you around town and then tackle the open road and the great outdoors. The CR-V comes equipped with a 2.4-Liter i-VTEC 4-Cylinder engine with 185 Horsepower and a 5-Speed Automatic Transmission. It has a rigid unit-body structure, coupled with taut suspension tuning, which give it impressive handling characteristics. For ultimate 4-season security, the 2014 CR-V is available with Hondas Real Time All-Wheel Drive with Intelligent Control System that smoothes out initial acceleration and can transfer up to 100 percent of torque to the rear wheels if necessary. The CR-

Roomy, fuel-efficient and loaded with family-friendly features, the 2014 Honda CR-V is our top choice among compact crossover SUVs.

The Honda CR-V carries over unchanged into 2014.

There is a very good reason the Honda CR-V has been the best-selling SUV for several years. Actually, there are numerous good reasons, as the CR-V offers a mix of practicality, comfort, usability, fuel economy, driver involvement, reliability and low ownership costs that simply hasn't been matched by any other compact crossover SUV. If you're in the market for such a family vehicle, the 2014 Honda CR-V needs to be on your test-drive list.

Really, the best word to describe the CR-V is "easy," because that's certainly what it makes your life. It's easy to drive, park and see out of. Its big backseat and large doors make it easy to load the kids, while a pair of handles in the trunk allow you to easily flip that seat forward for items too big to fit in the otherwise ample cargo area. In this age of complicated electronics interfaces, the CR-V may not boast trendy graphics, but its controls are simple and yes, easy to figure out. Honda even makes it easy to pick out your CR-V, as there's only one engine, three trim levels and no options save for navigation and rear-seat entertainment systems on the top trim. That method may not appeal to everyone, but it certainly makes the car buying process simpler.

However, it must be said that it's hard to get excited about the 2014 Honda CR-V -- it certainly isn't the most emotional choice. Its exterior styling is bland (bordering on ugly for some people), and much the same can be said of its cabin, where the materials aren't as high-quality as in some rivals. Then there's the matter of its lone engine choice: an efficient but humbly powered four-cylinder that will leave shoppers in search of more guts heading to a different SUV.

If any of this gives you pause, we recommend taking a look at the Chevy Equinox, 2014 Ford Escape, Hyundai Santa Fe Sport and 2014 Mazda CX-5. The Jeep Cherokee and Subaru Forester are also strong alternatives. Yet when it comes to picking the sensible, practical choice, nothing comes remotely close to the 2014 Honda CR-V.

The 2014 Honda CR-V is a five-passenger crossover SUV available in LX, EX and EX-L trim levels.

To the EX-L, you can add either a rear-seat entertainment system or a navigation system that includes a touchscreen, voice controls and real-time traffic.

Every 2014 Honda CR-V comes with a 2.4-liter four-cylinder engine good for 185 horsepower and 163 pound-feet of torque. A five-speed automatic transmission is also standard, though buyers have a choice of front- or all-wheel drive on all models. In Edmunds performance testing, an EX-L with all-wheel drive went from zero to 60 mph in 9.4 seconds. This is average for the segment.

The 2014 Honda CR-V comes standard with antilock brakes, stability and traction control, front-seat side airbags, side curtain airbags and a rearview camera.

In government crash testing, the CR-V received a perfect five stars for overall, front and side crash protection. The Insurance Institute for Highway Safety gave it the best possible rating of "Good" in the moderate-overlap frontal-offset, side-impact and roof strength tests. The Honda got the second-lowest "Marginal" score in the IIHS small-overlap frontal-offset test, but this is a new test in which few small SUVs have scored well.

The Honda CR-V's cabin boasts ample storage bins for stowing items both big and small. The large center console bin between the front seats is even big enough to hide many purses away from thieving eyes. The logical layout of the controls is another way in which the CR-V is highly user-friendly, but the overall design is uninteresting and various plastics are subpar. Rivals like the Escape, Equinox, Santa Fe Sport and CX-5 all have interiors with a more premium look and feel.

Abundant tech features help the CR-V stand out, though: A rearview camera, Pandora interface, and Bluetooth phone and audio connectivity are standard equipment on all models. These are options on most competitors and, in some cases, not available at all.

In back, you'll find a useful spring-loaded auto-fold feature that allows you to fold the rear seats almost flat by gently pulling on a lever. When raised, the seat offers an abundance of legroom and plenty of space for a rear-facing child seat. The CR-V also swallows more stuff than its outside appearance would suggest. With the rear seats in place, the CR-V can carry 37.2 cubic feet of cargo; fold the rear seat down and that figure grows to an impressive 70.9 cubic feet. Few competitors beat that.

Although the 2014 Honda CR-V's four-cylinder engine offers competitive performance for this class, there's no denying that it's light on low-end power and feels strained when you're driving in the mountains. This makes the absence of a V6 or turbocharged four-cylinder upgrade all the more apparent. If you want more power, you're going to be buying something else. The CR-V's five-speed automatic and its lack of manual shift control is a little behind the times (just about every other competitor has a six-speed auto), but it shifts smoothly, responds decently enough to throttle inputs and fuel economy is still very good.

Even though we find small crossovers like the CX-5 and Escape more enjoyable to drive overall, the CR-V offers precise steering and commendably steady handling. Ride quality on most surfaces is acceptably smooth, and unlike the previous generation, the 2014 Honda CR-V also boasts a relatively quiet cabin. Overall, this is a very refined crossover SUV.