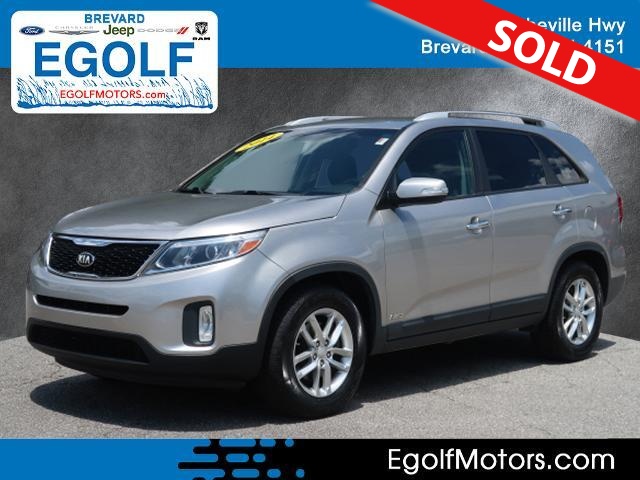 The 2014 Kia Sorento is one of our top recommendations to consumers shopping for a small or midsize crossover SUV, thanks to its well-mannered driving characteristics, roomy interior and generous standard and optional features.

The Kia Sorento has been one of our favorite midsize crossover SUVs these past few years. With available V6 power, plenty of features and a roomy interior with an available third-row seat, the current-generation Sorento is a great option for shoppers who want something a bit bigger than the typical small crossover. This year's updated 2014 Kia Sorento has all the same draws, but it brings some significant improvements to keep it up to speed with the competition.

Kia touts the 2014 Sorento as significantly redesigned, but in the absence of major styling changes, it looks like more of a refresh when you walk up to it. Even on the inside, you'd need to compare old to new side by side to spot the differences. But there are key changes to the chassis, as Kia has stiffened the body structure, fitted a new front suspension and retuned the rear suspension to improve both ride comfort and handling. There's more power, too. A new direct-injected, 3.3-liter V6 cranks out 290 horsepower, up from last year's 276 hp.

As before, the 2014 Kia Sorento is one of the few crossovers in this class to offer a third-row seat. Kia also packs in the features, as even the midgrade EX comes with items such as leather upholstery and heated front seats. This year the automaker has also updated the Uvo voice activation system for more accurate control and added a larger touchscreen with improved menus and graphics that grants the Sorento one of the best tech interfaces in this price range. The gauges can also feature an optional large LCD that digitally replicates an analog speedometer and provides additional trip computer information.

If you're expecting to get all of these features for a bargain price because of the Kia brand name, you're in for a bit of surprise, though: The entry-level Sorento LX starts in the mid-$20,000 range, but the upper trim levels go deep into the $30Ks. And since the Sorento is related to the equally impressive Hyundai Santa Fe, deciding on the Kia gets even more complicated. But whether you're comparing it with the Hyundai, other midsize crossovers like the Dodge Journey or the Ford Edge, or such top small crossovers as the Honda CR-V or the Toyota RAV4, the 2014 Kia Sorento is definitely a must-see, especially if you need a crossover SUV that can seat seven in a pinch.

Optional on the EX is the Touring package, which adds a power liftgate, a panoramic sunroof, a blind-spot-monitoring system, driver memory settings, ventilated front seats, an 8-inch touchscreen display, a navigation system and a 10-speaker Infinity surround-sound system.

Folding 50/50-split third-row seats (with rear air-conditioning) are optional on all Kia Sorentos.

The 2014 Kia Sorento is offered with two engine choices. The base engine for the LX is a 2.4-liter four-cylinder that produces 191 hp and 181 pound-feet of torque. Optional on the LX and standard on all others is a 3.3-liter V6 that makes 290 hp and 252 lb-ft of torque. All Sorentos come with a six-speed automatic transmission. Front-wheel drive is standard and all-wheel drive is available as an option.

In Edmunds performance testing, an AWD V6 Sorento accelerated from a standstill to 60 mph in 7.4 seconds, which is a quick time for this class.

Standard safety features for all 2014 Kia Sorento models include antilock disc brakes, stability and traction control, hill-start assist, front-seat side airbags, side curtain airbags for the first two rows and active front headrests. A rearview camera and rear parking sensors are standard on all EX and SX models and optional on the LX. A blind-spot monitoring system is standard on SX models and optional on other Kia Sorentos.

In Edmunds brake testing, the V6 AWD model came to a stop from 60 mph in 120 feet, a better-than-average distance for SUVs in this class.

In government crash tests the 2014 Kia Sorento rated five stars overall earning five stars in front and side crash tests and four stars in rollover tests. The Insurance Institute for Highway Safety gave the 2014 Sorento a rating of "Good."

Even in its base trim level, the 2014 Kia Sorento boasts a generous offering of standard features. We're particularly pleased that many of the high-end items are available as options throughout the lineup, so you're not forced to spring for a fully loaded model.

The quality of cabin materials is acceptable, though it can seem as if there's a bit too much hard plastic if you've sprung for the pricey SX or SX-L. The new, larger touchscreen for 2014 includes a more intuitive menu structure, better graphics and a secondary control knob that all together make for one of the most user-friendly tech interfaces on the market. Augmenting it is the Uvo voice activation system, which is comparable to Ford's praiseworthy Sync system. We found Uvo just as adept at recognizing voice commands for phone and entertainment systems: It allows for truly hands-free operation.

Front passengers will enjoy a commanding view of the road ahead and seats that are comfortable and supportive. Adult passengers will likely find plenty of headroom and legroom in the second row, but the optional third-row seats are suitable for children only. Accessing the third row is also a bit tricky. Cargo space is on the generous side, with 36.9 cubic feet available behind the middle row of seats. Folding those away expands that space to 72.5 cubes.

Most drivers will find that the 2014 Kia Sorento feels a bit underpowered with the base four-cylinder engine. Considering its negligible fuel economy advantage, the V6 engine is well worth the upgrade if your budget allows. On the road, the Sorento is exceptionally quiet with a scarcity of road noise. We also like the way it rides, as the suspension soaks up bumps with ease. Around turns, the Sorento's handling and steering are far from sporty, but most drivers should find it sure-footed enough for a family vehicle.

When navigating the confines of a parking spot, the big Kia feels smaller than it really is and in general it's quite a bit more maneuverable than larger seven-passenger SUVs. Poor rearward visibility can make the task of backing into a tight space seem daunting, but the available rearview camera and parking sensors help out here. All told, the 2014 Kia Sorento should be a good fit for a wide swath of SUV buyers.