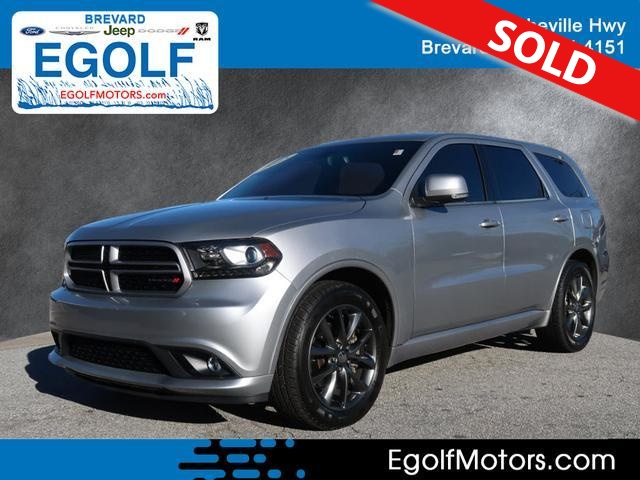 With its muscular styling and performance, standout interior and agreeable road manners, the 2015 Dodge Durango is a great choice for a seven-passenger SUV.

For 2015, the Dodge Durango gets an available Beats by Dr. Dre audio system, and the R/T can be decked out with vibrant red leather upholstery. The Blacktop package (technically a late addition for 2014) adds assorted styling enhancements and generous helpings of gloss-black exterior trim.

If you're in the market for a seven-passenger SUV, the 2015 Dodge Durango may not be the first option that springs to mind in this very competitive segment. But we're here to tell you that this "dark horse" Dodge is indeed worthy of your attention. With its classy interior, enticing infotainment features, available V8 power and industrial-grade towing capacity, the Durango is an all-around star. Despite that workaday toughness, it's also one of the easiest vehicles of its ilk to maneuver.

Dodge made major revisions to the Durango's interior last year, and the result is a very welcoming environment. Clean, functional design and high-quality materials throughout provide an upscale ambience that not long ago would have been completely unexpected of a Dodge product. Operating the high-tech features is a breeze, too, especially when the large, intuitive 8.4-inch touchscreen is specified. Last year also marked the debut of an eight-speed automatic transmission that replaced the old six-speed, and the extra two gears make the base V6 engine a lot snappier. If you can afford it, though, the 5.7-liter V8 is still a desirable beast, especially if you'll be using your Durango to tow heavy loads.

While the 2015 Durango's various strengths are quite appealing, some other choices may better suit your particular needs. Well-regarded family crossovers like the 2015 Chevrolet Traverse, 2015 Mazda CX-9 and 2015 Toyota Highlander offer considerably more maximum cargo capacity and a smoother ride over pockmarked roads. But if you like the idea of a sturdy yet comfortable family workhorse that rises above thanks to a premium vibe, the Edmunds "B" rated Dodge Durango merits a long look.

The 2015 Dodge Durango large crossover SUV is available in four trim levels: SXT, Limited, R/T and Citadel. Seven-passenger seating is standard across the board, while optional second-row captain's chairs (available on all trims) reduce capacity to six.

Optional on both the SXT and Limited, the Rallye Appearance package deletes the roof rails and adds 20-inch black wheels and additional body-color exterior trim. Optional on the Limited is the Safety, Security and Convenience package that features automatic wipers, automatic high-beam headlight control, xenon headlights, a power-adjustable steering wheel, a blind-spot monitor and rear cross-path alert. Also offered on the Limited is a Premium package that adds 20-inch silver wheels, a power liftgate, a sunroof, a navigation system and a 10-speaker Beats by Dr. Dre audio system (late availability). The navigation system and the power liftgate are also available as a separate package.

Optional on both the R/T and Citadel is a Technology package that adds adaptive cruise control, forward collision alert and the blind-spot monitor with rear cross-path alert. All trims except SXT offer a rear-seat Blu-ray/DVD entertainment system with dual video screens, an HDMI input for each screen and (if not already specified) eight-way power front seats with driver memory settings. Optional on all but the R/T is a skid plate package for off-road protection. All Durangos can be outfitted with a towing package that includes a heavy-duty alternator and oil cooler, load-leveling rear shocks and a full-size spare tire.

Except for the R/T, all 2015 Dodge Durango models start with a 3.6-liter V6 engine that makes 290 horsepower and 260 pound-feet of torque with the standard exhaust. Dodge rates it at 295 hp with the available dual-exhaust system (Citadel trim, Rallye Appearance package or Blacktop package). The transmission is an eight-speed automatic. Rear-wheel drive is standard, and all-wheel drive is optional on every Durango V6.

Standard on R/T and optional on the Limited and Citadel is a 5.7-liter V8 engine rated at 360 hp and 390 lb-ft. The V8 shares the V6's eight-speed automatic and similarly comes standard with RWD. Instead of the AWD system, though, it offers a more rugged on-demand 4WD system with a two-speed transfer case that features low-range gearing.

In Edmunds testing, a Durango V6 with RWD accelerated to 60 mph in 7.8 seconds, while one with the V6 and all-wheel drive did it in 8.1 seconds. Both are competitive times for this class.

Properly equipped, a Durango V8 can tow up to 7,400 pounds, while the V6 version tops out at 6,200 pounds -- in either case, far more than most rivals can handle.

Antilock disc brakes, stability and traction control, trailer sway control, front side airbags and full-length side curtain airbags are standard on every 2015 Dodge Durango. A rearview camera and parking sensors are optional on the SXT and standard on all other Durangos.

The 8.4-inch touchscreen includes Uconnect Access, an emergency telematics system that offers emergency assistance and stolen vehicle tracking. The Limited's Safety, Security and Convenience package gets you a blind-spot monitor and rear cross-path alert. The Technology package, available on R/T and Citadel, adds a forward collision warning system that sounds a chime and can also jerk the brakes to alert you when a collision seems imminent. If the driver doesn't respond by braking, the system will automatically apply the brakes to avoid or mitigate a collision.

In Edmunds testing, a Durango Limited V6 with rear-wheel drive came to a stop from 60 mph in 124 feet, while one with all-wheel drive did it in 125 feet. Both distances are average for this segment.

In government crash tests, the Durango received four out of a possible five stars overall, with four stars for total frontal impact safety and five stars for total side-impact protection. The Insurance Institute for Highway Safety (IIHS) awarded the Durango its highest score of "Good" in the moderate-overlap frontal-offset, side-impact and roof strength crash tests. The Durango's seat/head restraint design was also rated "Good" by the IIHS for whiplash protection in rear impacts, and Dodge's big SUV earned the middle "Advanced" rating for frontal crash prevention when equipped with the Technology package.

Modern and functional, the 2015 Dodge Durango's cabin is a standout in this class. Regardless of trim level, the design is attractive and features upscale materials that convey uncommon elegance. It's not just the predictable soft-touch surfaces up front, either; the Durango even provides supple outboard armrests for third-row passengers, whereas its rivals typically serve up cheap hard plastic.

The 8.4-inch touchscreen display that comes standard on most Durangos is attractive and easy to use, featuring large virtual buttons and quick response times. It's one of the best interfaces on the market, and its upgraded Uconnect system provides smartphone app integration, text-to-speech capability for text messages and advanced voice controls. The gauge cluster is another highlight, with a high-resolution 7-inch configurable information display flanked by analog gauges on either side.

The Durango's front seats are roomy and comfortable, and there's plenty of support and cushioning in the second row, too, with reclining seatbacks to make the trip even better. As for the optional second-row captain's chairs, they're almost as accommodating as the front seats. Access to the third row requires a moderate squeeze past the middle seats, even with the fold-and-tumble captain's chairs, but it's no more taxing than other SUVs in this class. The third-row seats are confining for adults but well suited to smaller passengers, as is the norm in this segment.

With the second- and third-row seats folded down, the Durango can carry up to 84.5 cubic feet of cargo. This is a respectable amount, but competing large crossover SUVs like the Chevy Traverse and Mazda CX-9 offer considerably more maximum cargo space. There's plenty of room behind the second-row seats, however, with that area measuring a healthy 47.7 cubic feet.

Thanks in part to its light steering effort, the 2015 Dodge Durango feels relatively maneuverable at low speeds for such a large vehicle. Unfortunately the steering remains light at higher speeds, too, which translates to a rather disconnected feeling when you're negotiating a twisting mountain road. The Durango is still as well mannered as any other SUV in these conditions, just not as confidence-inspiring as you might think given Dodge's sporty brand image.

Although the Durango is smooth and quiet at speed on the highway, we've found the ride on broken pavement to be somewhat jarring. Competitors like the Highlander and Ford Explorer are calmer when the going gets rough. When it gets really rough, however, the Durango V8 offers a true 4WD system with low-range gearing, and that's something its car-based crossover rivals can't say.

Low-end torque is not a strong suit of the V6, but once the Durango is moving, that engine pulls respectably, if rather noisily. Midrange acceleration is fine for passing and merging, and the eight-speed automatic transmission is at the ready with timely downshifts. Not surprisingly, the V8 provides more authoritative responses, along with a satisfyingly deep exhaust note when temptation gets the better of you.