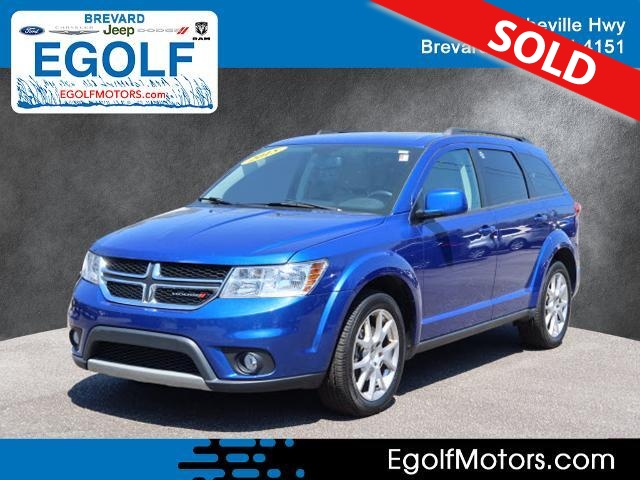 RECENT ARRIVAL ! BLUETOOTH, REAR BACK UP CAMERA ! Navigation System. Call Egolf Motors in Brevard at 828-884-4151 then x 1. Weve been serving customers in Western North Carolina and upstate South Carolina for over 40 years where you feel like family when you walk through the door. Call Egolf Brevard at 828-884-4151. You make the drive, well make the deal and youll feel like family! Reviews: * If you want a new SUV that seats up to seven but you dont want to spend a lot of money, the Dodge Journey could be for you. If you can swing a few thousand more for a higher trim, a V6 Journey with Chryslers Uconnect infotainment system is especially appealing. Source: KBB.com * Seating for up to seven; available built-in booster seats; useful interior storage solutions; smart touchscreen interface. Source: Edmunds * Though perfectly suited for the city, the Dodge Journey is always ready when you need a little quality time off the grid. Wherever you take it, the Journey brings comfort along for the ride for up to seven people. A 173hp, 2.4L, 4-Cylinder Dual VVT Engine powers the American Value Package, SE, SXT, and Crossroad models, in conjunction with a 4-speed automatic transmission. It gets an EPA estimated 26 MPG on the highway, plus it can get over 500 highway miles per tank. The mid-range SXT gives you the choice between the 2.4L or an incredible 283hp Pentastar V6 Engine to get your heart racing. The V6 is the standard engine in the Limited and R/T. The SE, SXT, Limited, and R/T can also be purchased with optional All-Wheel Drive. Further, all models come with AutoStick that gives you clutchless manual shifting for more exciting drives. Standard equipment for the Journey includes items like a 4.3-inch touch-screen AM/FM radio with CD player, a USB port and audio input jack, push-button start, in-floor storage in the 2nd row, a covered storage bin in the rear cargo area, and 17-inch wheels. Dependent on the trim you select, option possibilities include: 3-zone autom

The 2015 Dodge Journey has an available V6 engine and a third row so it might seem to be a decent pick for families on a budget, but overall it falls short of newer crossovers with more powerful four-cylinder engines and better fuel mileage ratings.

The Dodge Journey heads into 2015 with no major changes.

If you find "compact" crossover SUVs a little too compact, yet you don't really want to deal with the large footprint and compromised fuel economy of a larger crossover, Dodge might have the answer. The 2015 Journey is one of the few "tweener"-sized crossovers that could prove the just right size.

As a people-carrier, the Journey has a few things going for it. The available third row of seating is big enough for small children, and there's enough space for adults in the second row, too. There are also built-in booster seats available, which will save any parent lots of valuable child-loading time. Up front, the optional infotainment system is an excellent extra we recommend. It's easy to use, control, and it doesn't distract from the driving experience.

Unfortunately, the 2015 Dodge Journey has some drawbacks. Even though there are two available engines, neither is exceptional. The standard four-cylinder comes paired to an archaic four-speed automatic transmission and doesn't get the kind of fuel economy we've come to expect from class-leading crossovers and it is lackluster at best for providing passing power. The available V6 gives a healthy dose of acceleration in comparison, but in our extensive testing, it was still slower than most rivals with upgraded engines.  Along with this lack of power comes a disappointing driving experience. Driven around turns at a decent clip, the Journey suffers from quite a bit of body roll that saps driver confidence. All of our favorites in this class provide more engagement and stability.

One of those is the updated 2015 Honda CR-V. It may only have five seats, but it boasts lots of cargo space, an excellent ride and good fuel economy, too. The 2015 Mazda CX-5 and 2015 Ford Escape share many of the Honda's attributes but they're also a bit more entertaining to drive. If you require a third row, though, check out the Nissan Rogue as well as the larger 2015 Kia Sorento and Hyundai Santa Fe. The Kia and Hyundai are a bit pricier but have plenty of cargo space to show for it. Overall, the Edmunds "C" Rated 2015 Dodge Journey isn't a bad choice for your family, but there are several excellent vehicles we'd choose instead.

The 2015 Dodge Journey is available in five- and seven-passenger configurations. It is available in American Value Package (AVP), SE, SXT, Crossroad, Limited and R/T trim levels.

The Limited adds a V6 engine as standard, remote start, automatic headlights, heated front seats, a heated steering wheel and a 115-volt power outlet. The R/T includes all of the Limited features (minus the roof rails) and adds a monochrome exterior treatment, unique 19-inch wheels, a sport-tuned suspension, black perforated-leather upholstery with red stitching and a premium audio system.

Many of the features on the upper trim levels are available on lower trims via option packages. Other available features (depending on trim) include the Blacktop package (gloss black 19-inch wheels, grille and exterior trim), a sunroof, rear parking sensors, a rearview camera, a folding and reclining third-row seat, three-zone automatic climate control (with rear air-conditioning), integrated second-row child booster seats, a rear seat entertainment system, a navigation system (paired with the 8.4-inch touchscreen) and WiFi connectivity.

The 2015 Dodge Journey AVP, SE, SXT and Crossroad are powered by a 2.4-liter four-cylinder engine that produces 173 horsepower and 166 pound-feet of torque. A four-speed automatic transmission is standard, and you can only get front-wheel drive with this engine. EPA fuel economy ratings are 21 mpg combined (19 city/26 highway) – which is definitely subpar for a four-cylinder crossover.

Optional on the SE, SXT, and Crossroad but standard on the Limited and R/T is a 3.6-liter V6. It's good for 283 hp and 260 lb-ft and is matched to a six-speed automatic. Front-wheel drive is standard and all-wheel drive is optional. We recorded a 7.8-second 0-60-mph time in a front-drive, V6-equipped Journey, which is about average for a V6 crossover in this price range. EPA estimated fuel economy for the V6 is 19 mpg combined (17/25) with front-wheel drive and 19 mpg combined (16/24) with all-wheel drive; both are below average for a V6-powered crossover in this price range.

Every 2015 Dodge Journey comes standard with antilock disc brakes, traction and stability control, active front head restraints, front side airbags, side curtain airbags and a driver knee airbag. Integrated second-row child booster seats and rear parking sensors are optional on every Journey. A rearview camera and rear parking sensors are available as an option on the SXT, Crossroad, Limited and R/T.

In Edmunds brake testing, a Journey V6 FWD came to a stop from 60 mph in 124 feet, an average performance for this class.

In government crash tests, the Journey received four out of five stars for overall crash protection, with four stars awarded for frontal-impact protection and five stars for side-impact protection. In crash testing by the Insurance Institute for Highway Safety, the Journey received the top score of "Good" in the moderate-overlap frontal-offset, side-impact and roof-strength tests. Its seat and head restraint design was also rated "Good" for whiplash protection in rear impacts.

Though Dodge seldom has enjoyed a reputation for high-quality interiors, the 2015 Journey does boast pleasing materials and textures throughout the cabin and solid-looking assembly. The gauges and dashboard have a functional and contemporary design that wouldn't be out of place in any number of higher-priced vehicles.

Families will appreciate the selection of clever storage places squirreled throughout the 2015 Journey's cabin, particularly the cubbyholes in the floor. There's a fair amount of legroom behind the front seats and the integrated child booster seats are a nice bonus. Also helping the family-oriented mission is the Journey's available third-row seat, which is bundled with a separate rear air-conditioner. This seat is far from adult-friendly, but if you need to take a couple extra kids to a T-ball game, it's handy.

Lower all the seats and the Journey coughs up 67.6 cubic feet of total cargo capacity, which is about average for this class, slightly less than the Kia Sorento and CR-V, for example, but more space than some other two-row compact crossovers.

The 2015 Dodge Journey has two personalities depending on which engine you choose. The four-cylinder engine is noisy and really doesn't have enough power to get this heavy crossover moving. The outdated four-speed automatic transmission that comes with this engine does the Journey no favors in the fuel economy department, either.

Accordingly, we'd avoid the four-cylinder entirely and step up to the 3.6-liter V6, which feels potent in any situation. Unfortunately, fuel economy is still below average, and the six-speed automatic transmission can be slow to respond when a downshift is needed.

Around town, the Journey provides a smooth ride. However, the steering is on the slow side, and you might find yourself having to make more hand movements than you would otherwise prefer. When driven harder through turns, the Journey's body leans noticeably. The Journey feels heavier than other compact SUVs and solid on the open highway, even over rough surfaces, but it doesn't inspire much confidence around corners.