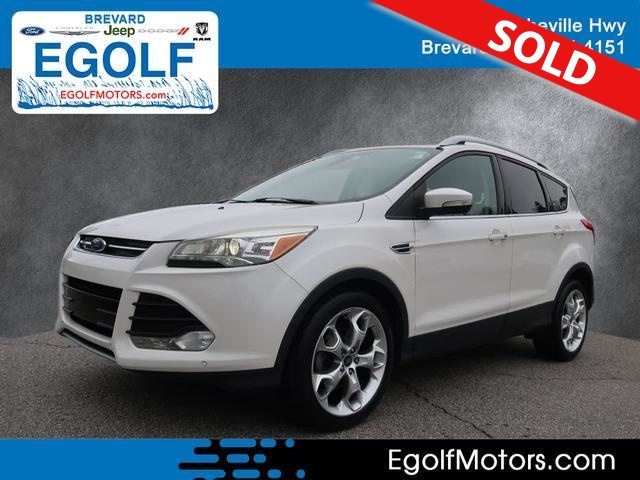 Escape Titanium, 4D Sport Utility, EcoBoost 1.6L I4 GTDi DOHC Turbocharged VCT, 6-Speed Automatic, Leather, Active Park Assist, Bi-Xenon High-Intensity Discharge Headlamps, BLIS w/Cross Traffic Alert, Equipment Group 301A, Navigation System, Power Panorama Roof, Rain-Sensing Wipers, Titanium Technology Package. Call Egolf Motors in Brevard at 828-884-4151 then x 1. Weve been serving customers in Western North Carolina and upstate South Carolina for over 40 years where you feel like family when you walk through the door. 23/32 City/Highway MPG Awards: * JD Power Initial Quality Study (IQS) * 2015 KBB.com 10 Best SUVs Under $25,000 * 2015 KBB.com Brand Image Awards Call Egolf Brevard at 828-884-4151. You make the drive, well make the deal and youll feel like family! Reviews: * If you’re seeking a compact SUV with great looks, great handling, great fuel economy and great features, the Ford Escape checks off all the boxes. Source: KBB.com * Good performance and fuel efficiency; many high-tech features; agile handling; high-quality cabin; comfortable seating. Source: Edmunds * The 2015 Escape is a Compact SUV that is an absolute head turner. A major departure from its previous generation, this Escape is refreshingly modern with sporty attitude. Further, the interior of the escape showcases impressive design, and high quality materials. It is one of the leaders in its segment for gas mileage, styling, and great technology as well. There are three trims available for the 2015 Escape: S, SE, and Titanium. Standard on all 3 models, is a generous assortment of standard features. You get a 6-Speed SelectShift Automatic, Power Windows and Door Locks, a Storage Bin under the floor, Touch Controls on the Steering Wheel, and Flat Fold Rear Seats. Plus, it comes with a 6 Speaker, AM FM Radio with CD, MP3 and Auxiliary Input, and a Communication and Entertainment System. The Base S Trim comes with a 2.5L, 4-Cylinder Engine with 168hp that gets an EPA estimated 22 MPG i

The 2015 Ford Escape is one of our favorite small crossover utility vehicles, thanks to athletic driving dynamics, an inviting cabin and useful high-tech features.

For 2015, the Ford Escape sees just a very minor shuffling of equipment.

A compact crossover typically stands out among its peers about as much as an Emperor penguin does while chilling on an ice floe with a hundred or so of his mates. Yet the 2015 Ford Escape manages to not only distinguish itself with its chiseled good looks, but also garner critical praise thanks to its sharp handling, comfortable seating and high-end interior touches.

Based on the same platform as the Focus, this Ford shares its smaller sibling's solid build quality, versatility and athletic demeanor. There's also a choice of no fewer than three engines: the base 2.5-liter four-cylinder and a pair of turbocharged fours. Of the latter, one displaces 1.6 liters and is focused on maximizing fuel economy while the other, at 2.0 liters, provides V6-like performance while still achieving impressive fuel mileage ratings.

That welcoming cabin we spoke of is furnished with high-quality materials and some impressive standard features, such as a rearview camera, an iPod interface and Ford's Sync voice-control system. We'd suggest opting for the slick-looking (though occasionally finicky) MyFord Touch electronics interface that not only makes the 2015 Ford Escape feel like a more expensive car, but is also superior to the standard interface of form-over-function buttons under a smallish display screen. We'd avoid getting too enthusiastic about other options, though, as selecting too many can push this Ford's price above its direct rivals. Keep the available equipment level reasonable, though, and the Escape still represents solid value in this class.

There are other, excellent choices in this segment, though, which is a main reason why the Escape ultimately receives a "B" rating from the Edmunds editors. The "A"-rated Honda CR-V and Toyota RAV4 may not be as handsome nor offer the same engine selection as the Escape, but they're both roomier inside and enjoy better reputations for reliability. The sporty Mazda CX-5 is also worth a look, as its sporty driving dynamics and excellent fuel economy help it also earn an A. The Escape's not that far behind, though, and we certainly recommend it, in no small part because of how pleasantly it stands out from the crowd.

The 2015 Ford Escape is a compact crossover SUV that comes in three trim levels: S, SE and Titanium.

At the top of the line, the Titanium combines the content of the SE Convenience and Leather Comfort packages plus 18-inch wheels, remote ignition, keyless ignition and entry, the power liftgate (with hands-free operation), ambient interior lighting, an eight-way power-adjustable passenger seat (with power lumbar), driver memory settings, an auto-dimming rearview mirror and a Sony 10-speaker sound system with HD Radio.

The 2015 Ford Escape differs from its competitors by offering three engine choices. A six-speed automatic transmission and front-wheel drive (FWD) are standard across the board, with all but the S available with all-wheel drive (AWD). All boast impressive EPA fuel economy numbers.

A 2.5-liter four-cylinder engine with 168 horsepower and 170 pound-feet of torque is standard on the S and a cost-reducing option on the front-wheel-drive SE. Fuel economy estimates for the 2.5 FWD are 25 mpg combined (22 city/31 highway).

The SE and Titanium come standard with a turbocharged 1.6-liter four-cylinder that makes 178 hp and 184 lb-ft. In Edmunds performance testing, a front-wheel-drive Escape 1.6 went from zero to 60 mph in 9.4 seconds. Its fuel economy is 26 mpg combined (23 city/32 highway), while AWD lowers its combined number to 25 mpg.

Optional on the SE and Titanium trims is a turbocharged 2.0-liter four-cylinder that pumps out 240 hp and 270 lb-ft of torque. In Edmunds testing, an AWD Escape with this engine accelerated to 60 mph in a quick 7.0 seconds. Its FWD fuel economy rates 25 mpg combined (22 city/30 highway), with 23 mpg combined for AWD. Properly equipped, an Escape with the 2.0-liter turbo engine can tow up to 3,500 pounds.

Antilock disc brakes, traction and stability control, front-seat side airbags, a driver knee airbag and full-length side curtain airbags are standard on the 2015 Ford Escape. Ford's MyKey (which allows owners to set vehicle parameters for younger drivers), a rearview camera and blind-spot mirrors are also standard. Rear parking sensors are optional on the S and SE and standard on the Titanium. A blind-spot warning system with cross-traffic alert is optional on the Titanium.

In Edmunds brake testing, an Escape SE 1.6 came to a stop from 60 mph in an excellent 115 feet – about 8 feet better than the class average.

In government crash tests, the Escape earned an overall rating of four stars (out of a possible five), with four stars for total frontal-impact crash protection and five stars for total side-impact protection. The Insurance Institute for Highway Safety gave the Escape a top score of "Good" in its moderate-overlap frontal-offset, side-impact and roof-strength tests. The Escape's seat and head restraint design was also rated "Good" for whiplash protection in rear impacts, but it received the lowest score of "Poor" in the Institute's new small-overlap frontal-offset test.

Up front in the cabin the Escape provides a pair of well-shaped, generously padded seats that ensure proper comfort and support. Materials and overall fit and finish are excellent. The gauges are large and easily read. But while most controls are intuitive, those for the climate system are awkwardly located down low, and the standard infotainment interface of form-over-function buttons and a smallish screen isn't especially user-friendly. The optional MyFord Touch touchscreen system is better, and although still a bit finicky to use at times, it does a good job of controlling the car's various audio, phone and navigation functions and nicely complements the Sync voice controls.

There's a competitive amount of room inside the Escape, even in the reclining rear seat, which has plenty of head- and legroom. The wide front seats are generously padded, with ample adjustment and good seatback bolstering. Storage space for smaller items in the front cabin is lacking compared to its rivals (especially the Honda CR-V), but cargo space behind the rear seats measures a competitive 34.3 cubic feet, and the squared-off roof line allows for a bigger dog to fit inside (only a few compact SUVs can claim the same). Flipping the rear seats down via a one-touch lever opens capacity up to 68.1 cubes, about average for the segment. A helpful option on the Escape is the hands-free power liftgate that opens with a wave of your foot under the rear bumper (as long as you have the key somewhere on you).

Blessed with quick steering, relatively sharp reflexes and an advanced all-wheel-drive system, the 2015 Ford Escape provides sporty handling and traction through turns. Overall, it's one of the better-handling small crossovers available. These abilities don't come at the expense of ride comfort either, as the Escape maintains a stable, isolated demeanor over bumps and when cruising on the highway.

Performance ranges from average with the 2.5-liter and turbocharged 1.6-liter engines to downright spirited with the 2.0 turbo. Although most owners will be perfectly content with the acceleration and fuel economy they get with the 1.6-liter turbo, there's no denying that the 2.0-liter turbo is satisfying, particularly on hilly roads. It pulls the Escape up steady grades without breaking a sweat, whereas the 1.6-liter would need an extra prod of the gas pedal or a downshift (or both) in these situations. The good news is that the turbocharged engines are equally quiet and smooth.