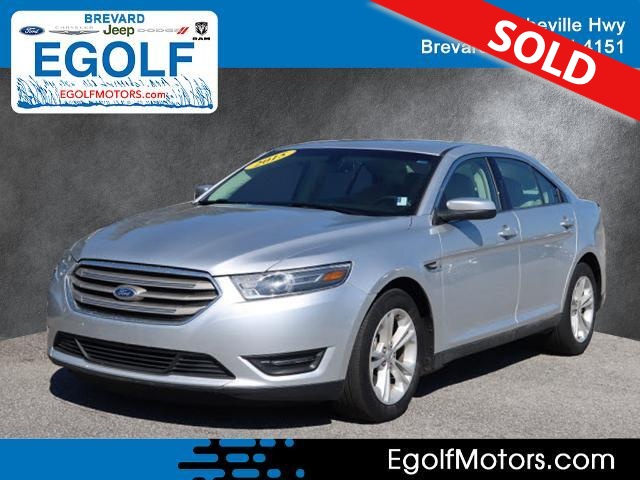 Taurus SEL, 4D Sedan, 3.5L 6-Cylinder SMPI DOHC, 6-Speed Automatic with Select-Shift, Additional IP Center Channel Speaker, Equipment Group 201A, Intelligent Access w/Push Button Start, Non-Memory Power Adjustable Pedals, SYNC w/MyFord Touch & SYNC Services. Call Egolf Motors in Brevard at 828-884-4151 then x 1. Weve been serving customers in Western North Carolina and upstate South Carolina for over 40 years where you feel like family when you walk through the door. 19/29 City/Highway MPG Awards: * 2015 KBB.com Brand Image Awards Call Egolf Brevard at 828-884-4151. You make the drive, well make the deal and youll feel like family! Reviews: * The 2015 Ford Taurus is classic American big-car motoring, with tons of cargo space, and the kind of driving feel that soaks up hundreds of miles a day without breaking a sweat. The Taurus SHO does so quickly, while the 4-cylinder model saves fuel along the way. Source: KBB.com * Excellent crash scores; quiet and comfortable ride; humongous trunk; available fuel-efficient four-cylinder engine; available all-wheel drive. Source: Edmunds * The Ford Taurus has aggressive front and rear styling that signals a high level of precision. With clean sharp lines and a fair share of attitude, this sedan is offered in four models: the base SE, SEL, Limited, and SHO. There are 3 amazing engine possibilities with the Taurus: All models except the SHO have the standard 3.5L V6, with the 2.0L EcoBoost as an option. The SHO gets the exhilarating 365hp 3.5L EcoBoost V6. It combines twin turbochargers with direct-injection technology to deliver 25MPG HWY. A 6-speed SelectShift Automatic transmission helps deliver plenty of torque for acceleration and passing. All-wheel drive is optional in the SEL and Limited, and standard in the SHO. For fuel efficiency, the 2.0L EcoBoost engine has a best-in-class EPA-estimated 32MPG HWY. Inside, the Taurus is crafted to soothe your senses, starting with soft-touch surfaces throughout. Enjoy the heated

With its comfortable interior and large trunk, the 2015 Ford Taurus is an appealing rendition of the classic full-size American sedan.

For 2015, the Ford Taurus returns with a few key standard equipment upgrades.

In some ways, the 2015 Ford Taurus seems like an ideal choice for a large sedan. It offers most of the qualities that shoppers typically expect from this class of car, and there are distinctive powertrain choices available to expand its appeal. But in other areas, Ford's big sedan will seem less appealing.

Ford offers a choice of three different engines, including a fuel-efficient yet powerful "EcoBoost" four-cylinder, a competitive traditional V6 and a turbocharged V6 that churns out an impressive 365 horsepower. Front-wheel drive is standard, but an all-wheel-drive system is also available for buyers looking for an edge when driving conditions turn dicey. Other highlights for the Taurus include an adult-friendly rear seat, a truly enormous trunk, great crash test scores and a long list of available options.

With deeper analysis, however, you'll likely realize that the Taurus is outclassed by newer large sedan rivals. Its interior isn't as roomy as expected given the car's size, and outward visibility is poor. There's also ponderous handling indicative of a big sedan and the sometimes frustrating MyFord Touch system's touchscreen controls.

While a redesigned model is on its way, we think for this year you'll be happier with other alternatives. The well-rounded 2015 Chevrolet Impala, classy 2015 Chrysler 300 and elegant 2015 Toyota Avalon are our current top-recommended choices, with the sportier Dodge Charger, upscale Buick Lacrosse and stylish Hyundai Azera being other strong contenders. We'd also take a close look at Ford's own Fusion, which is easier to drive and not that much smaller inside. So although there is much to like about this big Ford, the 2015 Taurus is simply outdone in most respects.

Stepping up to the Taurus Limited gets you the Group 201A equipment, plus 19-inch wheels, heated and ventilated eight-way power front seats (with two-way lumbar), driver memory functions and leather upholstery.

The Taurus SHO includes all of the Limited's major equipment and supplements that with a more powerful V6 engine, all-wheel drive, sport-tuned suspension and steering, xenon headlamps, distinctive styling, steering-wheel-mounted paddle shifters, aluminum pedals and distinctive leather upholstery with simulated-suede inserts. The optional SHO Performance package adds 20-inch alloy wheels, summer tires, performance brake pads, an even sportier state of tune for suspension and steering components, a different final-drive ratio (for quicker acceleration off the line), a defeat function for the stability control and simulated suede trim on the steering wheel. Stand-alone options are identical to those on the Taurus Limited, except for the spoiler, which is standard on the SHO.

Optional on the SE and front-wheel-drive SEL and Limited models is a turbocharged 2.0-liter four-cylinder engine that's rated at 240 hp and a stout 270 lb-ft of torque. This engine is the fuel economy leader, earning EPA ratings of 26 mpg combined (22/32).

The Taurus SHO gets a turbocharged 3.5-liter V6 that makes 365 hp and 350 lb-ft of torque. All-wheel drive and a six-speed automatic with paddle shifters are standard. In Edmunds performance testing, the Taurus SHO went from zero to 60 in a quick 5.8 seconds. Fuel economy ratings for the SHO are 20 mpg combined (17/25).

Every 2015 Ford Taurus comes standard with antilock disc brakes, stability and traction control, front seat side airbags, full-length side curtain airbags and integrated blind spot mirrors. A rearview camera is now standard across the model lineup, along with the MyKey system that allows drivers to set speed and volume parameters for secondary drivers such as teenage children or valets.

In government crash tests, the Taurus earned an overall rating of five stars out of a possible five, including five stars for overall frontal crash protection and five stars for overall side crash protection. The Taurus also received the best rating of "Good" in the Insurance Institute for Highway Safety's crash testing, including moderate-overlap frontal-offset, side-impact and roof-strength tests.

The Taurus features an attractive passenger cabin with an upscale look and feel, an effect that's enhanced by the availability of options like massaging front seats and a heated steering wheel. The available MyFord Touch system, which consists of a large touchscreen, a pair of smaller driver-configurable displays flanking the gauge cluster, steering-wheel-mounted buttons and voice controls adds a high-tech element. That said, trying to hit the touchscreen's virtual "buttons" while on the move can be frustrating and the entire system can take a while to get the hang of.

One design quirk of the Taurus is that its thick roof pillars, high beltline and tall center console can make the otherwise roomy cabin feel less spacious than it actually is. Outward visibility is also poor. Both front and rear seats offer generous head- and legroom, though, and the 20.1-cubic-foot trunk is pretty much the biggest you can find in any sedan.

The 2015 Ford Taurus offers the kind of unruffled ride quality and quiet cabin that one would expect from a full-size sedan. However, its overall dimensions, hefty weight and aforementioned compromised visibility can make it seem even bigger than it is when behind the wheel. This is also true of the SHO model despite its sport-tuned steering and suspension.