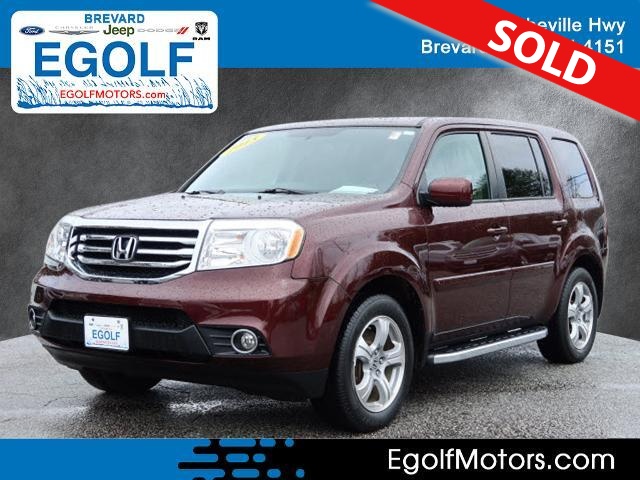 Pilot EX-L, 4D Sport Utility, 3.5L V6 24V SOHC i-VTEC, 5-Speed Automatic, 4WD, Leather. Call Egolf Motors in Brevard at 828-884-4151 then x 1. Weve been serving customers in Western North Carolina and upstate South Carolina for over 40 years where you feel like family when you walk through the door. Odometer is 30481 miles below market average! Awards: * 2015 KBB.com Brand Image Awards Kelley Blue Book Brand Image Awards are based on the Brand Watch(tm) study from Kelley Blue Book Market Intelligence. Award calculated among non-luxury shoppers. For more information, visit www.kbb.com. Kelley Blue Book is a registered trademark of Kelley Blue Book Co., Inc. Call Egolf Brevard at 828-884-4151. You make the drive, well make the deal and youll feel like family! Reviews: * If you need the maximum seating capacity offered in a midsize SUV, the 2015 Honda Pilot’s 8-passenger cabin fits the bill nicely. The Pilot’s excellent fuel economy, reliability and resale figures just serve to sweeten the deal. Source: KBB.com * Comfortable ride; roomy third-row seat; eight-passenger capacity; useful and clever storage areas. Source: Edmunds * The 2015 Honda Pilot perfectly balances value, performance and utility. With a great look and seating for 8, it succeeds in its ability to provide practical-minded buyers with dependable, comfortable, and efficient transportation. With short overhangs, a long wheelbase, large grille, and strong geometric lines, the 2015 Honda Pilot has a bold appearance that is sure to impress. Despite its size, the Pilot rides very much like a sedan. Fully independent suspension, unit construction, and responsive steering all add up to great highway directional stability and sure footed cornering on curvy roads. The Pilot is offered in four trims which can be bought in two-wheel drive or four-wheel drive versions: the base LX, EX, EX-L, and the top-of-the-line Touring. All Pilots are powered by a 250HP, 3.5-Liter, i-VTEC V-6 engine under the hood,

The 2015 Honda Pilot scores highly for passenger comfort and utility for cargo both big and small. That counts a lot for a family vehicle, but rival crossovers might prove to be more desirable -- especially in terms of driving dynamics.

A Special Edition (SE) trim level debuts for the 2015 Honda Pilot, slotting between the EX and EX-L in terms of included equipment.

The 2015 Honda Pilot is hardly at the vanguard of family transportation. Not only is the current generation now in its sixth year of production, the Pilot has always been blocky and a bit trucklike to drive at a time when its competitors are increasingly sleeker and more carlike. The result is a vehicle that's a bit stale and not exactly in keeping with the rest of the Honda lineup. But the Pilot still has several solid basic qualities that should serve a family well.

The main one is space. There's plenty of room on the inside, and even the third-row seats can accommodate adults, making this large crossover a true eight-passenger vehicle. There's also an upside to the Pilot's boxy shape: It allows for a more usefully shaped cargo bay for bulky items and ultimately makes life more convenient. Just drop those rear seats and you're ready to rock at Costco.

Still, we think the Pilot certainly could use an update. Besides its aforementioned trucklike and cumbersome driving experience, the Pilot is also missing several convenience, comfort and safety features that have become commonplace in the segment. For example, there are no driver warning systems for blind spots or lane departure, nor smartphone app integration, keyless ignition and ventilated seats. The availability of many popular features also is restricted to the upper trim levels, while some aren't available in conjunction with other features (you can get navigation or rear-seat entertainment on the EX-L, for instance, but not both).

As a result, most large crossover competitors are superior overall choices. The roomy and comfortable Chevrolet Traverse and well-rounded Toyota Highlander are noteworthy for offering eight seats like the Pilot, while the wagonlike Ford Flex, handsome Hyundai Santa Fe and sporty Mazda CX-9 are also worth a close look. The 2015 Honda Pilot earns a solid "B" rating from Edmunds.com for a comfortable ride, generous space for passengers and abundant room for their stuff (both big and small). But you'll certainly want to shop around before making a final decision.

The EX-L gets different wheels and the rear-seat entertainment system is optional, but it also gets the sunroof and satellite radio along with a power liftgate, a four-way power passenger seat, heated front seats, leather upholstery, a leather-wrapped steering wheel and an auto-dimming rearview mirror. A navigation system is optional only on the EX-L and brings with it voice controls, a subwoofer, 15GB of digital music storage and customizable vehicle settings (door locking, lighting, etc.). Note that you can get either the rear-seat entertainment system or navigation, but not both, on the EX-L.

The lineup-topping Touring adds roof rails, front and rear parking sensors, second-row sunshades, an enhanced tire-pressure monitoring system and a 10-speaker sound system. Unlike on the EX-L, rear-seat entertainment and navigation can be had together, but not separately.

Every 2015 Honda Pilot has a 3.5-liter V6 good for 250 horsepower and 253 pound-feet of torque. A five-speed automatic transmission and front-wheel drive are standard, and all-wheel drive is optional.

EPA-estimated fuel economy is about average for this segment. With front-wheel drive, the Pilot rates 21 mpg combined (18 city/25 highway) while opting for all-wheel drive results in a minor drop to 20 mpg combined (17/24).

Every 2015 Honda Pilot comes standard with antilock brakes, traction and stability control, front side airbags, full-length side curtain airbags and front seat active head restraints. A rearview camera is also standard, while parking sensors are included with the Touring. There are no advanced accident-prevention technologies available, nor any kind of emergency telematics.

In Edmunds brake testing, the Pilot came to a stop from 60 mph in 130 feet. This is one of the longest distances in the large-crossover segment.

In government crash testing, the Pilot received four out of five stars for overall crash protection, with four stars for total frontal-impact safety and five for total side-impact safety. The Insurance Institute for Highway Safety gave it the top rating of "Good" in the moderate-overlap frontal-offset impact test, as well as "Good" for side-impact safety, roof strength and whiplash protection (head restraints and seatbelts). The Pilot earned the worst possible rating of "Poor" in the IIHS's small-overlap frontal-offset impact test, however.

The biggest knock against the Honda Pilot's interior is the generally down-market appearance of the cabin trim -- it's a couple of steps below the nicely appointed Honda Accord. Otherwise, the 2015 Pilot has a useful interior design with thoughtful details and clear instrumentation. The standard automatic climate control helps reduce the number of buttons and knobs on the center stack, as does the 8-inch information screen for all trims. However, some of the controls have a chintzy feel and appearance.

Unlike in some other three-row crossovers, the Pilot's third row provides genuinely acceptable room for adults. Unfortunately, the seat cushions for the second and third rows are too low, forcing longer-legged passengers into more of a squatting, knees-up position. The Chevy Traverse and Ford Flex are much more comfortable in this regard. But if you truly need eight-passenger capacity, the Pilot, along with the Chevy Traverse and Toyota Highlander, is one of your few options in the crossover SUV class.

With the second- and third-row seats stowed, the Pilot can hold up to 87 cubic feet of cargo. This figure is technically less than some rivals, but the Pilot's boxy shape works to its advantage, allowing it to more easily accept bulkier items. The liftgate's glass also opens separately, allowing for longer cargo like surfboards to pass through. For smaller items, there are plenty of thoughtful storage bins and pockets throughout the cabin. We especially appreciate the fold-out net and underfloor bin that create two tiers of storage space behind the raised third row -- a space usually of negligible use in a three-row vehicle.

The 2015 Honda Pilot is reasonably pleasant to drive, with a cushy ride that readily soaks up ruts and bumps. The interior stays quiet at highway speeds, too. However, it perpetually feels like a heavy, cumbersome vehicle -- not just compared with the lithe Honda norm, but against other large crossovers as well. Around corners and in tight spaces, the Pilot feels ponderous due to its slow steering and boxy dimensions.

Its powertrain doesn't help, either. On paper, the Pilot's 250-hp V6 engine looks like enough motivation for this family SUV, but in the real world, it rarely feels like it. Highway grades are particularly troublesome. Much of this is attributable to the Pilot's heft and lack of power, but some of the performance deficit is attributable to the slow-shifting five-speed automatic transmission. Competitors have more efficient and effective six-speed or continuously variable transmissions.