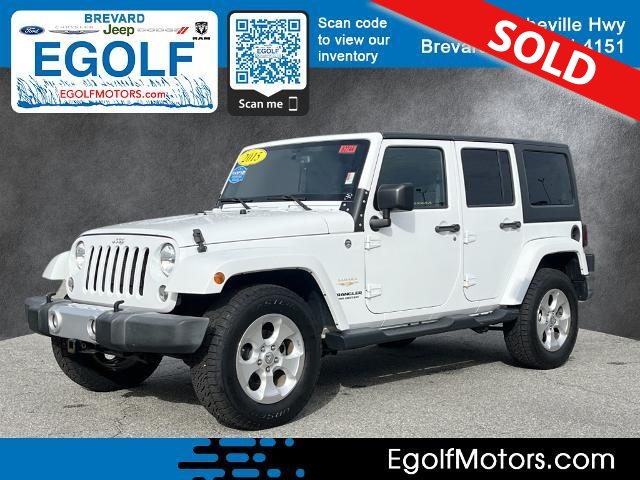 RECENT ARRIVAL ! 4WD ! SAHARA TRIM LEVEL ! Call Egolf Motors in Brevard at 828-884-4151 then x 1. Weve been serving customers in Western North Carolina and upstate South Carolina for over 40 years where you feel like family when you walk through the door. Call Egolf Brevard at 828-884-4151. You make the drive, well make the deal and youll feel like family!

An SUV unlike any other, the 2015 Jeep Wrangler offers exceptional off-road capability, though its lack of refinement makes it an acquired taste.

The 2015 Wrangler's standard stereo now has eight speakers, while the optional Alpine setup boasts nine. Also, Jeep now includes a standard Torx tool kit for removing the doors and roof. Lastly, packages and trim levels are shuffled. The Altitude and Rubicon Hard Rock editions debut, though the latter is essentially last year's Rubicon X with the addition of the premium audio system. The X moniker itself is reused for a new trim level that serves as a loaded-up Sahara.

All but unstoppable on the trail; unmistakable styling; two- and four-door variants; extensive factory and aftermarket parts support; fun to drive in its own special way.

With a heritage stretching back to World War II, the 2015 Jeep Wrangler is about as throwback a vehicle as you'll find in showrooms today. It has old-school solid axles at both ends and standard crank windows. It's noisy and rough-riding. The soft top is a puzzle to put up and take down and a magnet for potential thieves. Indeed, measured against virtually any other new SUV, the Wrangler is in many ways, well, terrible. For its legions of fans, however, that's part of what makes it so much fun.

It's accurate to say that these foibles are actually indicative of an incredibly honest, back-to-basics off-roader. Of course, the Wrangler also looks pretty cool and can dive headlong into places where few other vehicles dare tread. Plus, what other new car allows you to remove not only the roof, but the doors and windshield as well? The answer is, none.

Changes for the 2015 Wrangler are minimal, so much of your shopping time for a Wrangler will be spent just figuring out what configuration you want. Certainly, the four-door Wrangler Unlimited body style is the more practical choice, but the two-door's shorter wheelbase and overall length make it more nimble on tight trails. For both, the trail-ready Rubicon trim level is a highly popular choice as well. Even if you get just a no-frills Wrangler, though, there's a dizzying array of factory and/or aftermarket upgrades available to let you customize your ride in the years to come.

True rivals to the Wrangler are few. The 2015 Nissan Xterra marches on as the only significant alternative. It provides a more civilized on-road driving experience in exchange for less maximum trail-busting ability. The same was true for the Toyota FJ Cruiser, but Toyota has discontinued it after this model year. Perhaps as consolation, Toyota is offering off-road-oriented versions of its 2015 Toyota 4Runner and Tacoma pickup. But when it really comes down to getting a vehicle with legendary off-road ability and iconic style at minimal cost, there's still nothing like the Jeep Wrangler.

The 2015 Jeep Wrangler is a convertible SUV offered in two-door Wrangler and four-door Wrangler Unlimited versions. Each is available in Sport, Sahara or Rubicon main trim levels, with notable sub-trims including the Altitude, X, Freedom Edition, Willys Wheeler and the Rubicon Hard Rock.

The top-of-the-line Rubicon derives its status from its robust off-road credentials. Starting with the Sport's standard equipment, the Rubicon adds special 17-inch wheels, 32-inch tires, a heavy-duty Dana 44 front axle (matching the standard-spec Dana 44 rear axle), a shorter 4.10 rear-axle ratio (standard with the manual transmission, optional with the automatic), an upgraded transfer case with a lower crawl ratio, electronic front and rear locking differentials, an electronically disconnecting front sway bar, rock rails, automatic headlamps and under-hood insulation. Inside, you get standard air-conditioning plus the leather-wrapped steering wheel and shift knob, coat hooks, a 115-volt outlet, bright interior accents and satellite radio. The above-mentioned Power Convenience Group is an optional extra on the two-door Rubicon, but it's standard on the Rubicon Unlimited.

Also optional on Sport and Sahara is a limited-slip rear differential, while the Sport and Rubicon can be equipped with half doors that include plastic side windows and manual locks. The Sahara and Rubicon are additionally eligible for leather upholstery, heated front seats, automatic climate control and a navigation system that includes a 6.5-inch touchscreen. A nine-speaker Alpine audio system is available across the lineup, as is the Connectivity Group, which adds Bluetooth, a USB port, voice controls, an upgraded trip computer and a tire pressure monitoring display, as well as the leather-wrapped wheel and shift knob on Sport and Sport Unlimited.

Optional on all the above trims is a three-piece removable hardtop with a rear defroster and wiper. You can buy it instead of, or in addition to, the standard soft top. The default color for the hardtop is black, but you can get it in body color on the Sahara and Rubicon. All trims can be paired with a premium version of the soft top that's made of nicer material.

As for the special-edition Wranglers, the Altitude has the same standard equipment as a Sahara but with unique 18-inch wheels, a color-matched hardtop, high-gloss black exterior accents, black headlight surrounds, heated front seats, the Connectivity group and black interior accents.

The 2015 Jeep Wrangler is motivated by a 3.6-liter V6 that produces 285 horsepower and 260 pound-feet of torque. Four-wheel drive is standard and includes high- and low-range gearing. The Rubicon features uniquely short gearing and an upgraded transfer case with an extra-low crawl ratio. A six-speed manual transmission with hill start assist are standard, while a five-speed automatic with both hill start assist and hill descent control is optional. Towing performance is rather disappointing given this Jeep's rugged character -- the Wrangler Unlimited has a maximum capacity of 3,500 pounds, while the two-door Wrangler tops out at just 2,000 pounds.

The 2015 Jeep Wrangler comes standard with antilock disc brakes, traction and stability control, front airbags and hill start assist. Front side airbags are optional. In Edmunds brake testing, both the two- and four-door Wranglers came to a stop from 60 mph in about 140 feet, which is considerably longer than average.

The Insurance Institute for Highway Safety (IIHS) awarded the two-door 2015 Wrangler its highest possible rating of "Good" in the moderate-overlap frontal-offset impact test but a "Marginal" (second-worst) score in the small-overlap frontal-offset test. Lacking the optional side airbags, the tested vehicle was judged "Poor" (worst) in the side-impact test. Its seat and head restraint design was rated "Marginal" for whiplash protection in rear impacts.

The IIHS also tested a 2015 Wrangler Unlimited, rating it "Good" in the moderate-overlap frontal-offset test and "Marginal" for both side-impact and whiplash protection. Interestingly, the tested vehicle also lacked side airbags despite its slightly better side-impact rating, so there's no data available on Wrangler crashworthiness with side airbags installed.

The 2015 Wrangler's cabin actually has a modicum of style, particularly when the metal-look "bright interior accents" are specified. But at the end of the day, function triumphs over form. Although the upright dashboard provides clear gauges and sensibly laid-out controls, there's a distinct throwback feel when you're driving a Wrangler, evoking a bygone era when car interiors didn't resemble fighter-plane cockpits. Sure, you can have touchscreen navigation if you want it -- albeit Chrysler's older 6.5-inch unit, not the latest 8.4-inch model -- but otherwise, the Wrangler's about as basic as it gets. Honestly, anything more would seem a bit out of place. If you want the latest luxuries, maybe a Cherokee is more your speed.

Rear passengers will face some challenges in the two-door Wrangler. There's room for only two back there, first of all, and the low bench with limited knee and foot room can make longer trips unpleasant, especially for adults. Access is also awkward unless the top's off, in which case nimble riders can just clamber over the sides. The Unlimited's backseat offers room for three and conventional access via its extra set of doors, though it's still not particularly comfortable or spacious. There's not much cargo room behind the two-door Wrangler's rear seatbacks (just 12.8 cubic feet), but the four-door Unlimited offers a more useful 31.5 cubic feet, as well as a generous 70.6 cubic feet with those seatbacks folded versus 55.8 cubes in the two-door.

Putting the soft top up or down on any Jeep Wrangler takes patience, which makes the separate foldable sunroof panel an appealing option when the top's up and you're short on time. As with any soft-top convertible, security is also an issue, mitigated here somewhat by a locking glovebox and center console. The optional hardtop, which features removable T-top-style panels over the front seats, is a smart solution for those who don't intend to go completely roofless on a routine basis. Bear in mind, though, that the hardtop is heavy, so you'll need a friend to help whenever you want to remove it.

If you want to dominate the off-road trails in your area, you've come to the right review. We specifically recommend either the Sport, X or the Rubicon for this purpose. Why? Because the Sport is cheap, leaving plenty of room in the budget for custom modifications via either Jeep's Mopar parts division or the thriving aftermarket scene. The X comes with added off-road hardware, including beefier tires and a limited-slip rear differential, while the Rubicon goes even farther in that direction and is perfect for shoppers in search of a complete trail rig right off the shelf.

The Wrangler's V6 engine has enough grunt to make it seem reasonably quick around town, though the bricklike aerodynamics hamper higher-speed acceleration. Alas, on-road driving is also hampered by excessive noise levels, slow and vague steering and an unusual mix of both an unrefined ride quality and a lot of body roll and low grip when driving through turns. But these weaknesses turn into strengths when you get off the pavement, so it's all about your personal priorities. Like we said, just make sure you know what you're getting into before you sign up for the Wrangler experience.