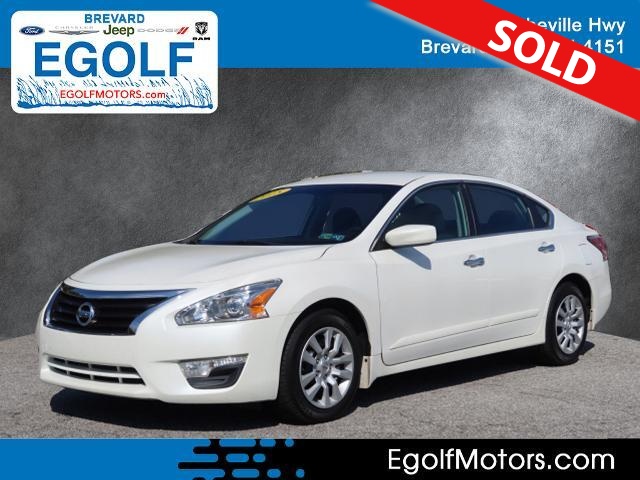 The 2015 Nissan Altima continues to be a top choice among family sedans, delivering excellent fuel economy and a rare blend of comfort and agility.

The 2015 Altima 3.5 SV and 3.5 SL trims now come standard with the Technology package (including touchscreen navigation and upgraded safety features), which remains optional on the 2.5 SV and 2.5 SL. Also, the remote ignition system can detect the ambient temperature and activate climate/defrost functions accordingly, and all SV models get a standard eight-way power driver seat. As a running change to the 2015 Altima 3.5, Nissan discontinued the S and SV trim levels. The remaining 3.5 SL trim later gained front and rear parking sensors as standard features.

Goldilocks has already starred in a few too many car reviews, but there's no better way to say it: The 2015 Nissan Altima is a "just right" family sedan in most respects. You want fuel economy? Both the four-cylinder engine and the V6 are class leaders. Power? Even the base four zips to 60 mph in less than 8 seconds. Driving dynamics? The ride is quiet and refined, yet the Altima's still got the handling athleticism that has long set it apart. Safety? Check the crash-test scores; they're nearly perfect across the board. It would appear Nissan has built the perfect car.

So why wouldn't you buy an Altima? Well, for one thing, the continuously variable automatic transmission (CVT) may not be to everyone's liking. Although it promotes fuel efficiency, it has a tendency to rev the engine noisily during modest acceleration and "lug" it at low rpm while cruising -- especially in four-cylinder models. Also, if you want a backseat that's built for 6-footers, there are better choices. Many rivals offer nearly full-size accommodations out back, and by this measure the Altima comes up a bit short.

One such rival is the spacious Honda Accord, though it's got a similar CVT in four-cylinder models that may also take some getting used to. The 2015 Ford Fusion shares the Altima's slight rear headroom deficit, but it's a stylish and highly competent choice overall. We'll also vouch for the 2015 Mazda 6, which lacks the Nissan's sophisticated infotainment offerings but compensates with comparable fuel economy and even sportier handling.

Returning to our theme, though, it's not easy to pick a bowl of porridge from this group -- they've all got their pros and cons. In the end, only one can be just right for you. We like the 2015 Altima's chances of earning that distinction.

The 2015 Nissan Altima is available in two main configurations: 2.5 or 3.5. The number signifies the engine specified (2.5-liter four-cylinder or 3.5-liter V6). From there, you'll have your choice of a base model (2.5 only) or increasing amounts of features through the S, SV and SL trim levels. Note that early in the model year, the 3.5 version loses its S and SV trims, leaving just the loaded "SL" trim level.

The base 2.5 Altima sedan starts with 16-inch steel wheels, full power accessories, a 4.3-inch LCD information display in the gauge cluster, a height-adjustable driver seat, Bluetooth phone and audio connectivity, and a four-speaker sound system with a CD player and an auxiliary input jack.

The 2.5 S steps up to automatic headlights, keyless ignition and entry, cruise control, a six-speaker sound system and an optional power driver seat with six-way adjustability (i.e., a powered version of the standard seat). It's also eligible for the Display Audio package, which contributes a 5-inch touchscreen display, a rearview camera, a USB port, satellite radio and smartphone app integration (NissanConnect).

The V6-engined 3.5 S comes with all of those features (including the Display Audio package) plus 18-inch alloy wheels and steering-wheel-mounted paddle shifters.

The Altima 3.5 SV and SL are equipped similarly to their 2.5 counterparts, but they also come standard with the contents of the Convenience and Technology packages. The 3.5 SL also comes with xenon headlights and, later in the model year, front and rear parking sensors.

All 2015 Nissan Altimas employ front-wheel drive and a CVT.

The Altima 2.5 models are powered by a 2.5-liter four-cylinder engine rated at 182 horsepower and 180 pound-feet of torque. In Edmunds performance testing, an Altima 2.5 zipped from zero to 60 mph in 7.8 seconds, one of the quicker times we've measured for a four-cylinder family sedan. EPA-estimated fuel economy is an extraordinary 31 mpg combined (27 city/38 highway).

The 2015 Nissan Altima comes standard with antilock brakes, stability and traction control, front side airbags and side curtain airbags. A rearview camera is optional on 2.5 S and standard on 3.5 S and all SV and SL models. Blind-spot monitoring, rear cross-traffic alert and lane-departure warning are available on the 2.5 SV and 2.5 SL and standard on the 3.5 SV and 3.5 SL.

The 2015 Altima has one of the nicer cabins in its class. The overall look is simple yet upscale, while a closer inspection reveals tight construction and mostly high-quality materials. Behind the sporty three-spoke steering wheel, the crisp driver information screen is flanked by a large speedometer and tachometer, all of which are easily read at a glance.

Drivers and front passengers of all shapes and sizes should have no problem finding their comfort zone in the standard NASA-inspired "zero gravity" front seats, which are remarkably well-shaped and supportive. The backseat, however, is so-so, with limited headroom and just average legroom for a family sedan. Normal-sized adults will be fine back there, but 6-footers may feel a bit cramped.

The Altima's technology roster is highlighted by the widely available NissanConnect Apps system, providing support for various smartphone applications. The system is paired with a 5-inch touchscreen by default, and it can accommodate multiple users by storing individual profiles for app connectivity. The Technology package adds a navigation system, voice controls and a more advanced 7-inch touchscreen, as well as the safety technologies discussed above. Overall, we've found these systems very easy to use.

Trunk space is pretty standard at 15.4 cubic feet, but the opening is conveniently wide.

The 2015 Altima is one of the most rewarding family sedans to drive. The four-cylinder engine provides good power for passing and merging, which is particularly laudable given its exceptional fuel economy. The continuously variable transmission (CVT) does leave room for improvement when matched to the inline-4 -- we've found it too eager at times during moderate acceleration, causing needless engine noise, only to settle into a cruise at an rpm that feels too low -- but on the bright side, its gearless operation means you'll never feel a shift. The V6 powertrain, meanwhile, is one of the most capable in this class, and the CVT draws less attention to itself with the bigger engine.

In real-world driving, it's the Altima's well-roundedness that stands out. The ride is hushed and compliant, even on rough surfaces, but there's a sense of control that you don't get in some similarly smooth-riding competitors. Should you find yourself alone on a winding road, the precise steering and well-tuned suspension will quickly make themselves known. The Altima isn't the sportiest family sedan, nor the most luxurious, but if you're looking for both traits in the same package, it's hard to think of a competitor that does it better.