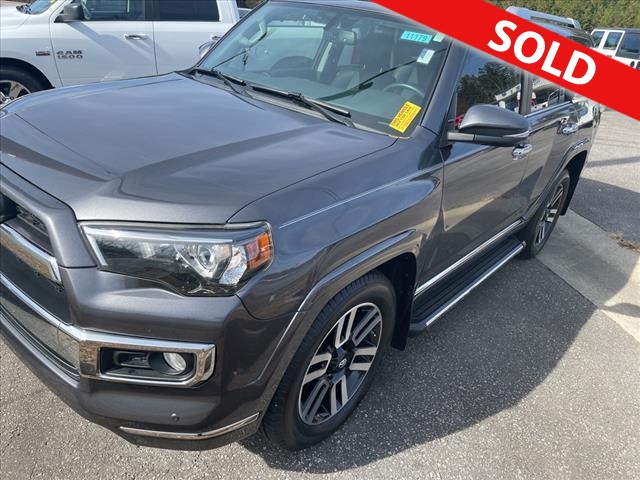 RECENT ARRIVAL ! 4WD ! IN DASH NAVIGATION ! HEATED & COOLED FRONT SEATS ! LEATHER ! Radio: Entune Premium Audio with Navigation. Call Egolf Motors in Brevard at 828-884-4151 then x 1. Weve been serving customers in Western North Carolina and upstate South Carolina for over 40 years where you feel like family when you walk through the door. Odometer is 61625 miles below market average! Awards: * 2015 KBB.com Best Resale Value Awards Call Egolf Brevard at 828-884-4151. You make the drive, well make the deal and youll feel like family!

The 2015 Toyota 4Runner is a rugged body-on-frame SUV that has more off-road capability than almost any rival, but as a daily driver it's lacking a bit of refinement.

The TRD Pro model debuts with an assortment of off-road-specific upgrades.

There are only a few SUVs left these days that utilize body-on-frame construction for serious off-road capability. Not only is the 2015 Toyota 4Runner one of them, but it also offers three-row seating, a spacious cargo hold and Toyota's prime reputation for reliability. If you're hoping to find all of those attributes in one vehicle, the 4Runner stands alone in this price range. It won't give you the fuel efficiency or ride comfort of a car-based crossover, but the 2015 4Runner stays true to its roots as an SUV that's ready for almost anything.

Even in base SR5 trim, the 4Runner is primed for off-road action. Standard equipment includes items like mud guards and skid plates, while four-wheel-drive models add a dual-range transfer case, hill-start assist and hill-descent control. The Trail trim adds advanced electronic aids for more precise off-roading, but the big news this year is the range-topping TRD Pro trim level, which boasts beefier tires, high-performance Bilstein shocks and distinctive styling elements. Bottom line, any 4Runner can bust trails with the best of them, and there's more capability than ever for 2015.

If you spend most of your time on the pavement, however, there are better family vehicles available. Specifically, the 4Runner has a difficult time smoothing out potholes in the city with its busy ride, and its fuel economy is woeful compared to most V6-powered crossovers. Oh, and that optional third row we mentioned is best reserved for kids, so if you want adult-sized space back there, you'll need to look elsewhere.

There are several notable 4Runner alternatives to consider. The 2015 Jeep Grand Cherokee is one of our favorites if you don't need three seating rows, and it offers competitive off-road performance, several engine options, more robust towing capacity, better fuel economy and an upscale interior. The related 2015 Dodge Durango also has more towing capacity and a premium cabin, and it comes standard with a third-row seat. The two-row 2015 Nissan Xterra is relatively basic inside, but it's quite similar mechanically to the 4Runner, and it's considerably cheaper. If you can do without all the trail-busting hardware, the 2015 Toyota Highlander offers room for eight passengers, a carlike ride and superior efficiency and acceleration.

But if nothing less than a traditional three-row SUV will do, the 4Runner's the only game in town. It may be among the last of a dying breed, but the Edmunds "B" rated 2015 Toyota 4Runner still has a lot to offer and is one of our top picks for a midsize two-row SUV in our 2015 Buying Guide.

The 2015 Toyota 4Runner is a midsize SUV offered in four trim levels: SR5, Trail, TRD Pro and Limited. The SR5 and Trail are divided into standard and Premium sub-trims. Five-passenger seating is standard, but an optional 50/50-split third-row seat on the SR5 and Limited models raises capacity to seven.

Many of the higher-end standard amenities are available as options on lower trim levels, but availability can vary depending on the region of the United States in which you live. Stand-alone options include fixed running boards, automatically deploying/retracting running boards, a sliding rear cargo floor (two-row models only) and roof-rack crossbars.

The 2015 Toyota 4Runner employs a 4.0-liter V6 engine that produces 270 horsepower and 278 pound-feet of torque. The transmission is a five-speed automatic. The SR5 and Limited models are available with either rear-wheel drive or four-wheel drive, while the Trail and TRD Pro are 4WD-only.

In Edmunds testing, a 4WD 4Runner Trail went from zero to 60 mph in 7.8 seconds, which is about average among competing SUVs.

A rearview camera is standard across the board, but front and rear parking sensors are only available on the Limited trim level. The Limited also comes with Safety Connect, which includes automatic collision notification, a stolen-vehicle locator and emergency assistance.

In Edmunds brake testing, a four-wheel-drive 4Runner Trail model took 132 feet to stop from 60 mph, which is a long distance by crossover standards but not bad for an off-road-oriented SUV.

In government crash tests, the 4Runner earned four out of a possible five stars overall, including four stars for total frontal impact safety and five stars for total side-impact safety. The Insurance Institute for Highway Safety awarded the 4Runner its top rating of "Good" in the moderate-overlap frontal-offset, side-impact and roof-strength crash tests, but the small-overlap frontal-offset crash test resulted in a "Marginal" rating (second-lowest). The 4Runner's seat/head restraint design was rated "Good" for whiplash protection in rear-impact crashes.

The interior of the 2015 Toyota 4Runner features instruments and controls that are well laid out and easy to understand, while the gauges are equally attractive and legible. Most owners will be satisfied with the quality of the 4Runner's cabin materials, which are oriented more toward durability than aesthetics. If you want something a bit more plush, something like the Jeep Grand Cherokee will likely be a better fit.

In addition, all 4Runners come with a touchscreen audio interface placed high on the center stack. Depending on which trim level you've selected, the touchscreen brings various degrees of functionality from Toyota's Entune suite of smartphone-enabled services and apps. All trims except the base SR5 and Trail integrate a navigation system into this interface.

As for passenger accommodations, the standard five-person seating arrangement includes a reclining 40/20/40-split-folding second-row seat. The optional third-row seat is bound to be a tempting option for carpoolers, but you'll want to make sure your elementary schoolers will actually fit, as this is one of the smallest, tightest third rows of any midsize SUV.

In reality, the real estate in the back of the 4Runner is better suited for cargo. There are a healthy 47 cubic feet of cargo room behind the second-row seats, a number that jumps to an even healthier 89.7 cubic feet with all the rear seats folded down. This is far more space than the Grand Cherokee offers, and more than many large crossovers (such as the Ford Explorer and Honda Pilot) as well.

The Toyota 4Runner is designed to provide real utility when the pavement ends. It's at its best when you're plugging along on off-road trails, and the numerous upgrades on the Trail and TRD Pro trims only add to the fun. At the same time, the 4Runner is refined enough for the daily grind, though lots of bumps make it in to the cabin as the rugged suspension and big tires jostle you around. The 4Runner's steering feels a little too light in normal driving situations, but this turns out to be ideal for off-roading, as it results in reduced kickback on gnarly trails.

The 4Runner's V6 engine is strong enough for most needs, but there's no denying that you get more grunt from rivals like the V8-powered Grand Cherokee and Durango. The 4Runner's five-speed automatic transmission provides well-timed shifts, but we certainly wouldn't mind another gear to calm the engine on the highway and eke out another mpg or two.