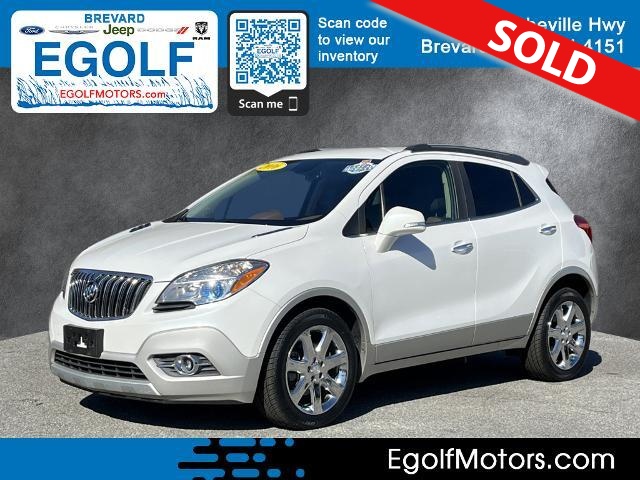 Thanks to its quiet cabin, user-friendly technology features and truly compact size, the 2016 Buick Encore is worth a look if other crossover SUVs seem too large. However, the Encore's modest performance and interior space limit its appeal.

New for 2016 is the Encore Sport Touring model with a more powerful 1.4-liter turbocharged four-cylinder rated at 153 horsepower.

While it's certainly a radical departure from Buick's long history of building large luxury sedans, look a little closer and you'll find the 2016 Buick Encore subcompact SUV still embodies many of the elements this brand is known for. Indeed, it manages to retain much of its essential Buick-ness by virtue of its hushed cabin with near-luxury trappings and a long list of available upscale features, including a heated steering wheel and a built-in 4G LTE WiFi hotspot.

New this year is the Sport Touring model with a version of the standard turbocharged 1.4-liter engine that puts out an additional 15 horsepower and 29 pound-feet of torque. It's a welcome upgrade, which should make for livelier acceleration. Unfortunately, the regular turbo 1.4-liter engine is still used on the remaining Encore trim levels. No matter the trim, though, the Encore's small size makes for impressive maneuverability when it comes time to negotiate crowded streets or fit into a compact parking space. Other strengths include impressive fuel economy numbers and top crash-test scores.

Of course, many buyers may still be put off by the Encore's snug interior, including a noticeably cramped backseat and cargo room easily bested by larger crossovers like the Ford Escape, Honda CR-V, Mazda CX-5 or Buick's own Envision. And if interior room isn't a problem, there's also an insurgence of new, similarly subcompact competitors for 2016 to consider, each of which can offer superior interior space, driving dynamics or style. Popular choices include the Honda HR-V, Mazda CX-3 and Fiat 500X.

We think each of these is ultimately stronger than the Encore for more shoppers, but its inherent Buick-ness nevertheless maintains its appeal for those looking for a quiet and comfortable means of getting around with a dollop of luxury and an elevated driving position.

The 2015 Buick Encore is a compact-crossover SUV offered in five trim levels: Base, Convenience, Sport Touring, Leather and Premium.

The new-for-2016 Sport Touring version starts with all of the above Convenience package goodies and adds a more powerful four-cylinder engine and unique exterior styling cues.

The Premium model gets the Leather trim equipment plus front and rear parking sensors, a forward collision warning system, a lane-departure warning system, automatic wipers and a seven-speaker Bose sound system (optional on all but the base model).

The Leather and Premium are available with the Experience Buick package, which adds 18-inch chromed alloy wheels, a sunroof and a navigation system. The latter two items are available separately on all but the base model.

The 2016 Buick Encore is powered by one of two turbocharged 1.4-liter inline four-cylinder engines. The new Sport Touring model gets a beefed-up version that produces 153 hp and 177 lb-ft of torque. All other Encore trim levels feature a variant that puts out 138 hp and 148 lb-ft of torque. A six-speed automatic is the only transmission offered. All Encore models are offered with a choice of front- or all-wheel drive.

In Edmunds performance testing, a front-wheel-drive Encore accelerated to 60 mph in 9.8 seconds, which is slower than most other crossovers in this price range.

In government crash tests the Encore received a perfect five-star rating for overall crash protection, frontal protection and side-impact protection. The Insurance Institute for Highway Safety gave the Encore the highest possible rating of "Good" in its moderate-overlap and small-overlap front-offset, side-impact and roof-strength crash tests.

In Edmunds testing, a front-drive Encore stopped from 60 mph in 123 feet, which is average for this class.

The 2016 Buick Encore features comfortable front seats and a high seating position that offers a commanding view of the road. In back, the seats offer enough head- and legroom for 6-footers but there's no denying that it's a tight fit for both adults and rear-facing child seats. The interior layout includes a number of storage cubbies, including a drawer under the front passenger seat of cloth-upholstered models that's useful for stashing valuables you'd rather not leave out in plain sight.

As for the surroundings, the Encore's passenger cabin can have a high-end atmosphere accented by soft-touch materials and handsome simulated wood and metal trim (we say "can" because certain trim levels and color schemes look much better than others). Aside from a smattering of similar-looking buttons, controls are fairly intuitive and easy to access. A high point is the large 7-inch center touchscreen for the IntelliLink infotainment system. The system is also fairly easy to use, though it can occasionally be slow to respond (and unlike other GM models, it was not updated for 2016 to address that shortcoming).

The interior also comes up short in the cargo-carrying department, with 18.8 cubic feet of space behind the rear seats and 48.4 cubic feet with the seatbacks folded down. Those numbers are similar to subcompact SUV competitors, but fall far short of more popular compact crossovers like the Ford Escape and Honda CR-V. The Encore's standard fold-flat front passenger seat at least gives the interior added flexibility.

Driving the 2016 Buick Encore is an experience very much in line with what you'd expect from Buick. The cabin is extremely quiet for the segment with extensive sound-deadening materials and active noise-cancelling technology. The suspension is also tuned to favor comfort over handling, and so not surprisingly it soaks up most bumps with little drama. The short wheelbase does mean the ride can get choppy over freeway expansion joints, however.

On the handling front, the Encore feels confident if not particularly sporty, a setup we suspect will suit most buyers just fine. On the upside, the combination of this little SUV's small size and tight turning radius give it a nimble feel larger compact SUVs can't match (but that is nevertheless very much matched or bettered by its subcompact SUV rivals). We've found the standard 1.4-liter turbocharged four-cylinder to be rather anemic, even within its less-than-athletic segment, which makes the new, more powerful version found in the Sport Touring an appealing addition to the lineup.