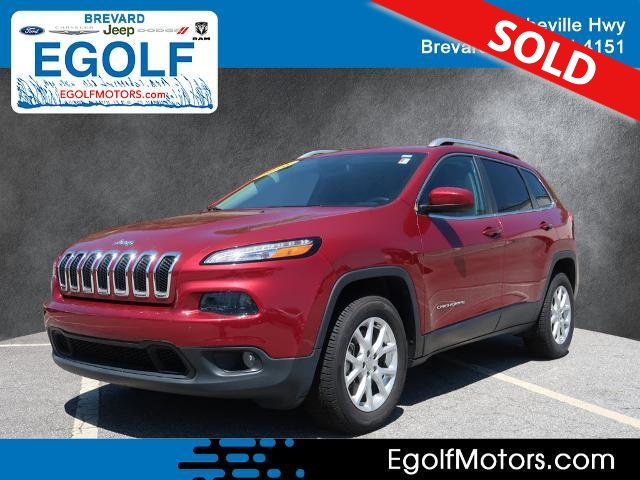 Cherokee Latitude 4x4, 4D Sport Utility, 3.2L V6, 9-Speed 948TE Automatic, 4WD, Quick Order Package 26J. Call Egolf Motors in Brevard at 828-884-4151 then x 1. Weve been serving customers in Western North Carolina and upstate South Carolina for over 40 years where you feel like family when you walk through the door. 4x4 Call Egolf Brevard at 828-884-4151. You make the drive, well make the deal and youll feel like family!

The 2016 Cherokee can deliver plenty of off-roading capability, but the bigger story is that it's civilized and comfortable enough to drive to work every day. It's worth a look if you're shopping for a small SUV.

For 2016, Cherokees equipped with the 8.4-inch Uconnect system get Siri Eyes Free compatibility, a new drag-and-drop menu bar and a Do Not Disturb function that sends phone calls straight to voicemail and can generate an automatic reply to text messages.

The small crossover segment is one of the most competitive in the industry, filled with affordable, well-equipped and comfortable vehicles. The 2016 Jeep Cherokee looks to distinguish itself by offering those traits plus the allure of Jeep's legendary off-road capability. Additionally, the Cherokee features a roomy interior with straightforward controls and ample sound insulation. Aside from its unusually modest cargo capacity and an underwhelming four-cylinder engine, this Jeep's got a lot going for it.

Although Jeep lists that 2.4-liter four-cylinder at a competitive 184 horsepower, we're not particularly fond of the way it puts down that power. The Cherokee feels sluggish on the road with it, and the associated nine-speed automatic transmission can be slow to downshift when the driver demands power. The optional 3.2-liter V6 is superior, as it's much peppier when called upon, yet not much thirstier at the gas pump. We prefer the V6, but opting for the pricier V6 naturally hurts the Cherokee's value proposition.

While all versions of the 4WD Cherokee are off-road-capable, you really want the Trailhawk to tackle serious terrain.

As for the Cherokee's off-road credentials, they're mainly associated with the Trailhawk model, which is easily recognizable by its tough-guy looks and higher ride height. The Trailhawk gets a robust four-wheel-drive system with low-range gearing and adds an exclusive locking rear differential. With 8.7 inches of ground clearance and skid plates, the Cherokee Trailhawk can venture into terrain normally reserved for off-road-ready SUVs like the Toyota 4Runner and Jeep's own Wrangler. If the Trailhawk seems too expensive, the other trims offer a regular all-wheel-drive setup that puts the Cherokee on about the same level as rival AWD-equipped small crossovers.

If you're shopping for a small crossover, there are some other options to consider. The Honda CR-V and Toyota RAV4 offer more cargo space and superior four-cylinder engines than the Cherokee, while the Ford Escape and Mazda CX-5 are more engaging to drive. You might also consider the Subaru Forester and Subaru Crosstrek, which come standard with all-wheel drive and match the Trailhawk's impressive ground clearance. Overall, though, the 2016 Jeep Cherokee is a solid contender with plenty to offer, particularly if you're the adventurous type.

There's also an Altitude package (it can also be referred to as a trim level) for the Latitude that includes special exterior trim details.

A few of the higher trims' standard features are available on lower trims as separate options. All Cherokee trims are eligible for a towing package, while all except the Sport can be outfitted with a dual-pane sunroof and nine-speaker audio system.

Standard on all 2016 Jeep Cherokees is a 2.4-liter four-cylinder engine rated at 184 hp and 171 pound-feet of torque. Optional on all but the base Sport is a 3.2-liter V6 that makes 271 hp and 239 lb-ft of torque. A nine-speed automatic transmission is standard with both engines.

You have your choice of front-wheel drive or four-wheel drive with either engine, but Trailhawk models are 4WD only. Jeep offers two 4WD systems. Standard on four-wheel-drive Sport, Latitude and Limited models is the light-duty Active Drive I 4WD system; it requires no input from the driver, though it does come with a Selec-Terrain dial that features different terrain modes. Standard on the Trailhawk and optional on other 4WD Jeep Cherokees is the more rugged Active Drive II system, which features low-range gearing and a locking rear differential along with an additional "Rock" mode for the Selec-Terrain dial.

A tow package is available on all 2016 Jeep Cherokees and gives V6 models a healthy 4,500-pound towing capacity.

The four-cylinder engine is OK, but upgrade to the V6 if you can.

In Edmunds testing, a V6-powered Cherokee Limited with Active Drive I went from zero to 60 in 7.4 seconds, a satisfactory showing for a small crossover with an upgraded engine. A Cherokee Trailhawk, also with the V6, fell back to 8.0 seconds.

Standard safety equipment on all 2016 Jeep Cherokees includes antilock disc brakes, stability and traction control, front- and rear-seat side airbags, side curtain airbags and front knee airbags. A rearview camera is optional on the Sport trim level and standard on all other models.

Trailhawk and Limited models can also be equipped with an option package that adds adaptive cruise control, a forward-collision warning and mitigation system (with automatic brake intervention in potential collision situations), a lane-departure warning system and blind-spot and rear cross-traffic alerts.

In Edmunds brake testing, a Cherokee Trailhawk came to a stop from 60 mph in 131 feet. The all-terrain tires contributed to that lengthy stop, but it's still one of the longest distances we've recorded in this segment. A Cherokee Limited with more common all-season tires and 4WD came to a stop in 122 feet, which is slightly better than average.

In government crash tests, the Cherokee received an overall rating of four out of five possible stars, with four stars for total frontal impact protection and five stars for total side impact protection. The Insurance Institute for Highway Safety gave the Cherokee the best possible rating of "Good" in moderate-overlap frontal-offset, side-crash and roof-strength crash tests. The Cherokee's seat and head restraint design was also rated "Good" for whiplash protection in rear impacts, but the Jeep received a "Marginal" rating (second worst of four) in the small-overlap frontal-offset test.

The cabin of the 2016 Jeep Cherokee has a high-quality look and feel, especially on upper trim levels. The available Uconnect 8.4-inch touchscreen is a fantastic system, featuring easy-to-navigate menus, large virtual buttons and an accompanying knob that makes whipping through long lists a breeze. It's certainly worth the extra cost if you can make the jump out of the Sport, though even that trim's 5-inch touchscreen is a solid example of the breed.

The 2016 Jeep Cherokee's Uconnect infotainment system is one of the best in the business.

Passenger quarters are generous in the 2016 Jeep Cherokee. It's easy to get comfortable in the available power driver seat, which offers ample adjustability. The Cherokee features one of the better backseats in the compact crossover class. Not only does it recline, but it also provides for fore-and-aft adjustment, and the high-mounted bench supports adults' thighs without pushing their heads into the rafters.

Alas, cargo capacity is unimpressive. There are just 24.6 cubic feet of space behind the second row and 54.9 cubic feet with the rear seatbacks folded down. Both figures are 5-15 less than what most other small crossover SUVs offer; indeed, they're closer to the norm in the smaller "subcompact" crossover class. Another drawback is the lack of useful storage space up front for personal effects.

The 2016 Cherokee is on the heavy side for this segment, which is why the four-cylinder engine can feel sluggish despite its competitive horsepower and torque. This engine also has a more raucous sound than most other four-cylinders in this class. We really like the V6 engine, though, as it gives the 2016 Cherokee a relaxed, refined demeanor not found in the typical four-cylinder SUV. There's plenty of power, too, and the nine-speed automatic feels more at home in this pairing. With either engine, though, that transmission can be a bit reluctant to downshift once you're cruising on the highway.

The Cherokee is exceptionally quiet at highway speeds, and over rough city streets it provides about as cushy a ride as you'll get in this class. The downside is that the Jeep feels rather ponderous when going around turns. Its steering is precise, but this Cherokee doesn't feel as sporty as segment standouts like the Ford Escape and Mazda CX-5. All Cherokees have solid off-road potential if one of the 4WD systems is specified, but it's the Cherokee Trailhawk, which earned a "B" rating from our testing department, that stands out for trail-busting ability. If you have the inclination, the Trailhawk can take on some pretty serious terrain, thanks to its low-range gearing and rear locking differential.

For more driving impressions, be sure to check out our long-term test of the 2014 Jeep Cherokee.