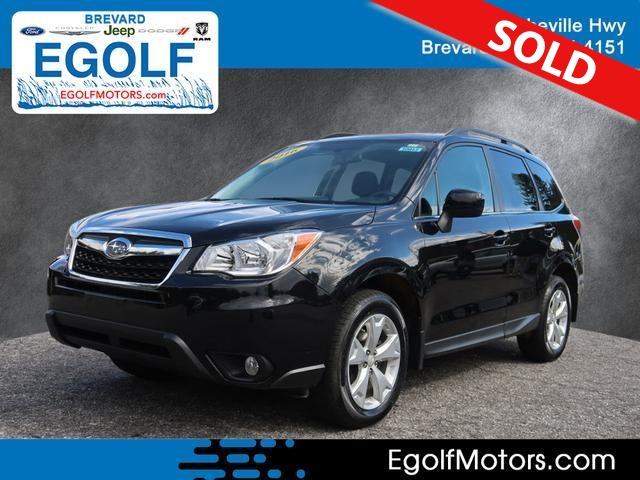 Do you need a crossover that can handle whatever life throws at it? The Subaru Forester delivers with standard all-wheel drive, a roomy interior and plenty of ground clearance for off-road excursions. You can even add a turbocharged engine, or stick with the base engine for better fuel economy. Let's take a look at the Forester's full range of talents.

The 2016 Subaru Forester receives a new touchscreen-based technology interface, with the base 2.5i trim level providing a standard 6.2-inch screen and the other trims boasting a 7-inch version that includes enhanced features.

The small crossover SUV category is intensely competitive, and it's one in which the 2016 Subaru Forester holds its own quite well. Along with the sure-footedness of standard all-wheel drive, the Forester delivers plenty of cargo capacity, roomy seating and an available turbocharged engine that's one of the strongest in its class. There's nothing super flashy about this crossover, but Subaru is a believer in offering functional simplicity. That's precisely what you get with the 2016 Forester.

The 2016 Subaru Forester is as comfortable in the desert as it is on the highway, thanks to standard all-wheel drive and generous ground clearance.

Safety and fuel economy are key attributes for the small crossover class, and the Forester delivers here, too. Though blind-spot monitoring is curiously missing from the Forester's features list, it does offer an available forward collision mitigation system plus perfect crash-test scores. As for fuel efficiency, the Forester's continuously variable transmission (CVT) is a big help, especially when cruising on the highway. But even models with the six-speed manual -- a rare treat in this class -- can hold their heads high when it's time to fill up.

If there's one real drawback to the 2016 Subaru Forester, it's that it doesn't do a whole lot beyond the rational to woo you. Shoppers seeking classier interiors or more engaging on-road manners may find the 2016 Ford Escape and 2016 Mazda CX-5 more to their liking, while the 2016 Hyundai Tucson provides more visual panache. For outdoor recreation enthusiasts, the off-road-tuned Jeep Cherokee Trailhawk is worth a hard look. Then there are the Honda CR-V and Toyota RAV4, which remain tough to beat for all-around competence. Comparison shopping is definitely a must in the small crossover SUV category, but overall we're confident that the 2016 Subaru Forester deserves a spot on your list.

The 2016 Forester is available in six different trim levels, with the Limited and Touring being the most-equipped choices.

Optional for the base 2.5i (with the CVT) are 17-inch wheels and roof rails. These items come standard on the 2.5i Premium, which further adds rear privacy glass, a panoramic sunroof, an eight-way power driver seat (with two-way power lumbar), a rear armrest with cupholders, reclining rear seatbacks, a larger 7-inch touchscreen, voice commands, Starlink Safety Plus (see Safety section below) and a six-speaker sound system with satellite radio and dual USB ports. An All-Weather package (heated side mirrors and heated front seats) is standard if the manual transmission is specified, but it's an extra-cost option with the CVT.

Moving to the 2.0XT Premium brings all the equipment of the 2.5i Premium plus the 2.0-liter turbocharged engine and CVT, 18-inch alloy wheels, a sport-tuned suspension, the All-Weather package, a rear roof spoiler, the upgraded instrument cluster and a leather-wrapped steering wheel.

The 2.0XT Touring offers the same upgrades as the 2.5i Touring.

Auto-dimming mirrors are optional for all Foresters. Optional on the Premium (except with the manual transmission), Limited and Touring trims is a navigation system and an EyeSight driver assist technology package (see Safety, below) that includes adaptive cruise control.

All 2016 Subaru Foresters come standard with all-wheel drive. The 2.5i Limited, 2.5i Touring and all 2.0XT models have an additional driver-selectable mode that optimizes various functions to improve traction on slippery surfaces. These models also include hill descent control.

The 2016 Subaru Forester 2.5i features a 2.5-liter four-cylinder engine that produces 170 horsepower and 174 pound-feet of torque. A six-speed manual transmission is standard for the 2.5i and 2.5i Premium trims, with a CVT optional. The higher trims are CVT-only.

The EPA rates CVT-equipped 2.5i models at 27 mpg combined (24 city/32 highway), a laudable achievement for an all-wheel-drive crossover. If you get the manual transmission, the numbers drop to 25 combined (22 city/29 highway). In Edmunds testing, a CVT-equipped Forester 2.5i Limited accelerated from zero to 60 mph in 9.0 seconds, which is about average for a base-engine AWD crossover in this segment.

Stronger performance is available if you choose the 2.0XT. Its standard turbocharged 2.0-liter four-cylinder churns out 250 hp and 258 lb-ft of torque and comes only with the CVT. In Edmunds testing, a Forester 2.0XT Touring accelerated from zero to 60 mph in 6.3 seconds, which is exceptionally quick for a crossover in this class with an upgraded engine. The 2.0XT could also impress on the fuel economy front; the EPA estimates 25 mpg combined (23 city/28 highway), though our test vehicle struggled to match these numbers in real-world driving. The other downside is that the 2.0XT can tow just 1,500 pounds -- same as the base Forester.

Antilock disc brakes, traction and stability control, front side airbags, side curtain airbags, a driver knee airbag and a rearview camera are standard on all 2016 Subaru Foresters. The Starlink Safety Plus telematics system, which is standard for most Foresters, includes emergency assistance and automatic collision notification. It can be further upgraded to the Starlink Safety Plus and Security Plus system that adds remote services (door unlocking, vehicle location services, stolen vehicle recovery and alarm notification). Lane departure warning, forward collision warning and a forward collision mitigation system with automatic braking are available via the EyeSight driver-assist technology package.

In Edmunds brake testing, a Forester 2.0XT stopped from 60 mph in 119 feet, a good number for this class. A Forester 2.5i (with the 17-inch wheels) made this same stop in 126 feet, which is a little worse than average.

The various textures and accents used throughout the 2016 Subaru Forester's interior deliver enough visual appeal to keep pace with other affordable crossovers, though the overall look follows Subaru's simplicity-is-better design philosophy. We are happy to see Subaru add its latest technology interface (Starlink) to the Forester. Even the base 2.5i comes with a touchscreen with smartphone app integration (including Aha, Pandora, iHeartradio and Sticher), while the larger 7-inch screen gets upgraded graphics and allows you to use intuitive pinch-and-expand finger movements to zoom in or out.

The Forester offers a useful amount of cargo area with the rear seatbacks up, and is a class leader when they are folded flat.

Where the Forester really shines is in its functionality. Elevated stadium-type rear seating enhances thigh support and legroom and affords a better view. This sense of space is reinforced by a huge cargo hold that yields 34.4 cubic feet behind the rear seats and 74.7 cubic feet with the rear seatbacks folded. The latter is nearly 4 more cubic feet than the Honda CR-V, which has traditionally been at the head of this class. The caveat is that you'll need to stick to the base model if you want the big numbers, as models with the panoramic sunroof drop to 31.5/68.5 cubic feet due to a lower roof height.

The 2016 Subaru Forester 2.5i won't set any speed records with its 170 horses, and while the CVT performs well for the breed, it lacks the responsiveness of a good conventional automatic. Still, the base engine's impressive fuel economy should be enough compensation for most buyers, and it's also the only way to go if you want the manual transmission. As for the 2.0XT's turbocharged engine, it's a strong performer, and ideal if you drive a lot on hilly or high-altitude terrain.

Around town and on the highway, the Forester serves up a comfortable and quiet ride. It's really just on curvy roads that its tall height and compliant suspension become liabilities, as it's simply not as capable or nimble as many rivals. You do get an extra dollop of off-road capability with the Forester, though, thanks to generous ground clearance and an available driver-selectable "X Mode" that maximizes traction in the dirt.