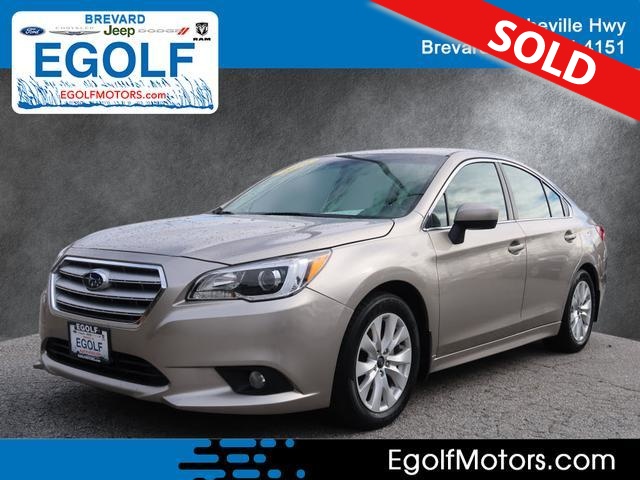 Sliding off the road into a ditch can really ruin your day. If that's a potential scenario for you during the winter, you should add the 2016 Subaru Legacy and its standard all-wheel-drive system to your test-drive list. Plus, the Legacy offers enough additional benefits to make it a solid pick during those months when the sun is shining. Check out its other virtues below.

The 2016 Subaru Legacy's steering system has been revised for better feel. On the Limited model, Subaru says it also retuned the shock absorbers for a smoother ride. Premium and Limited trims get cloud-based infotainment applications and connected services, including one-button emergency assistance and automatic collision notification. Another safety change for 2016 is that the optional EyeSight system now includes lane departure intervention.

Standard all-wheel drive in a segment where it's extremely rare to even be an option; excellent outward visibility; high-tech safety features work well and are widely available throughout the lineup; top crash test scores.

If you're itching to see a lot of Subarus (and who isn't?), go to where it rains and snows. All-wheel drive, standard in all Subaru models save the BRZ sport coupe, has made Subarus popular in places like New England and the Pacific Northwest. But Subarus have always had something of a quirky nature, and while that may boost sales in Oregon, it has kept the Legacy from being a major player in the competitive midsize sedan market.

Subaru has tried to broaden the Legacy's appeal in recent years by making it feel more like a mainstream car. A 2015 redesign saw improved passenger and cargo space along with a significant upgrade to cabin materials and electronics controls. Subaru also boosted the Legacy's fuel economy, which had previously been a notable drawback for the car.

But there are many quirks that remain for the 2016 Subaru Legacy. Chief among them is its standard all-wheel drive. True, some competing midsize sedans offer it, but usually only on upper trim levels or with more powerful engine options. It's not only standard on the Legacy, but it doesn't come at the expense of a higher price or mpg figure. Another quirk is the horizontally opposed "boxer" engines (a 2.5-liter four-cylinder and a more powerful 3.6-liter six-cylinder), which have their benefits and detriments, but ultimately are most notable for how few companies employ them. Both engines come exclusively with a continuously variable automatic transmission (CVT) with steering-wheel-mounted paddle switches that attempt to mimic a manually shifted six-speed.

The 2016 Subaru Legacy comes standard with all-wheel drive, which is an unusual and potentially desirable trait for a modern family sedan.

We like the Subaru Legacy, and we're well aware of how well owners like it: Subaru's brand loyalty is among the best in the business. However, this is an intensely competitive segment loaded with excellent choices, among them the 2016 Ford Fusion, 2016 Honda Accord, 2016 Mazda 6, 2016 Nissan Altima and 2016 Toyota Camry, which hold slight (but significant) advantages over the Legacy in areas such as styling, technology and driver enjoyment. We think the overlooked Legacy is nevertheless indeed worth a look, especially if you do live in a place where it rains and snows in significant amounts.

There's a good chance you're considering the all-wheel-drive Legacy because you live somewhere chilly during the winter. If so, you're going to want the seats, mirrors and windshield wipers heated, along with dual-zone climate control. To get that, you need at least the 2.5i Premium trim that also adds most of the Legacy's available infotainment features. We also recommend opting for the EyeSight accident avoidance technology.

The 2016 Subaru Legacy is a five-passenger sedan available in four trim levels: 2.5i, 2.5i Premium, 2.5i Limited and 3.6R Limited (the numbers reference engine size).

Base 2.5i models come with 17-inch steel wheels, automatic headlights, air-conditioning, cruise control, a height-adjustable driver seat, a tilt-and-telescoping steering wheel, full power accessories, a 60/40-split folding rear seat, a rearview camera, Bluetooth phone and audio connectivity, and a four-speaker sound system with a CD player, HD and satellite radio, an iPod/USB interface, an auxiliary audio jack, and smartphone integration with Pandora and Aha audio streaming. A 6.2-inch touchscreen display controls most entertainment and phone functions. There are no factory-installed options for the 2.5i model.

Standard and optional equipment for the 3.6R Limited follows that of the 2.5i Limited, with the addition of a six-cylinder engine and xenon headlights.

The 2016 Subaru Legacy offers two engines: a 2.5-liter four-cylinder and a 3.6-liter six-cylinder. The base 2.5-liter horizontally opposed ("boxer") four-cylinder produces 175 horsepower and 174 pound-feet of torque. The six-cylinder boxer generates 256 hp and 247 lb-ft of torque. Both engines pair with the only available transmission: a CVT with steering-wheel-mounted paddle shifters. All-wheel drive (AWD) is standard.

During Edmunds track testing, a Legacy 2.5i Premium ran from zero to 60 mph in 9.4 seconds. That's rather lackluster, as many rivals accomplish the same sprint in less than 8 seconds.

The EPA rates the four-cylinder Legacy at 30 mpg in combined driving (26 city/36 highway), an impressive result in this class especially considering that all-wheel drive normally drags fuel economy down a point or two. The six-cylinder Legacy returns 23 mpg combined (20 city/29 highway), which is a bit less than the fuel economy of several competitors with upgraded engines, though, again, most don't offer AWD.

The 2016 Subaru Legacy comes standard with stability and traction control, antilock disc brakes, a rearview camera, front side airbags, side curtain airbags and seat cushion airbags that deploy from the seat bottom to help keep occupants in place in a frontal collision.

On the Premium and Limited trim levels, the Outback comes with Starlink Connected Services, which includes emergency assistance and automatic collision notification. This can be enhanced with the optional Safety Plus and Security Plus upgrade, which adds remote vehicle access, remote vehicle locating and stolen vehicle recovery.

In Edmunds brake testing, a Legacy 2.5i Premium stopped from 60 mph in a short 114 feet, a better-than-average performance for this segment.

Subaru's no-nonsense approach to car design is reflected in the simple and straightforward interior design of the 2016 Subaru Legacy. Materials quality has improved compared to earlier versions of the Legacy, with more cushioning at common touch points like the armrests and center console. The optional touchscreen navigation system has crisp graphics and is pretty easy to use thanks to smartphone-like operation and large icons.

Cabin materials are class competitive and its controls are generally easy to use.

There is plenty of front headroom, and we've found the front seats to be comfortable. In back, the Legacy offers slightly less headroom and legroom than the Honda Accord and Ford Fusion, and its 15-cubic-foot trunk trails the competition slightly as well, a compromise Subaru chalks up to the space required for the Legacy's all-wheel-drive system. That said, the differences are slight and the Legacy is still suitably roomy for a family sedan.

One thing we like about the Legacy is its excellent outward visibility -- no small feat in an age of high door lines and bulky pillars that result from modern safety standards. Firm, supportive seats and a slightly higher driving position make the Legacy Subaru's most comfortable sedan yet.

Both the four- and the six-cylinder engines for the 2016 Subaru Legacy are quiet and smooth, but acceleration is lackluster. On the upside, though, the Legacy's standard all-wheel-drive system gives it plenty of capability in bad weather. The standard CVT that comes with either engine also does an excellent job of getting the most out of the two power plants. Although it can essentially mimic a broad range of gearing for maximum mileage, this CVT is also programmed to deliver noticeable "shifts" to make it feel more like a traditional transmission.

The 2016 Subaru Legacy comes up a bit short in the way it drives. It's slower and less cushy than many other rival sedans.

Last year, we noted that the Legacy's ride wasn't as cushy as some of its competitors. Subaru has retuned the shock absorbers on the Limited model, which already had a suspension tuned for better ride comfort. But the volume-selling 2.5i and Premium models remain unchanged, and we suspect the Legacy's ride quality will still be relatively unrefined when driving over big bumps. Around turns, the Legacy is precise and easy to drive, but a significant amount of body roll or lean prevents the car from feeling truly sporty.