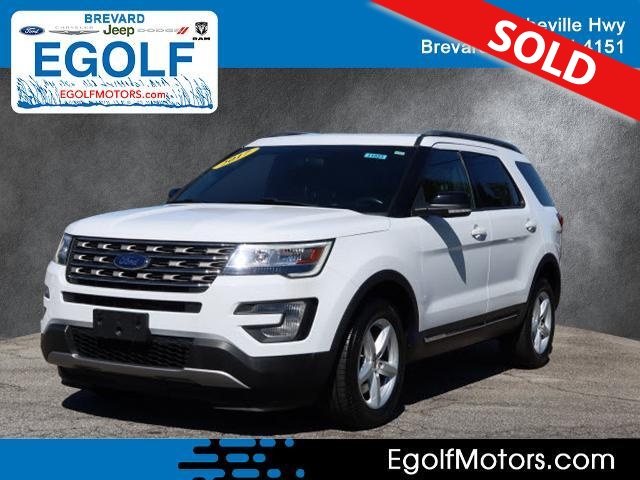 Explorer XLT, 4D Sport Utility, 3.5L 6-Cylinder SMPI DOHC, 6-Speed Automatic with Select-Shift, 4WD, Ebony Black Cloth, Equipment Group 200A. Call Egolf Motors in Brevard at 828-884-4151 then x 1. Weve been serving customers in Western North Carolina and upstate South Carolina for over 40 years where you feel like family when you walk through the door. Odometer is 4495 miles below market average! Awards: * 2017 KBB.com 10 Most Awarded Brands * 2017 KBB.com Brand Image Awards Call Egolf Brevard at 828-884-4151. You make the drive, well make the deal and youll feel like family! Reviews: * Plenty of high-tech features that are easy to use; cargo space is generous behind the third row; turbocharged V6 engine delivers plentiful power; cabin is quiet and comfortable on the highway. Source: Edmunds

If you’re looking for the perfect family-friendly SUV, you might find it in the 2017 Ford Explorer. After significant updates for 2016 and some nice additions for 2017, the Explorer is once again at the top of the class with its sharp styling, high-tech features, a comfortable ride and plenty of passenger space.

In addition to some option and equipment shuffling between Explorer trims, the most significant changes for 2017 are the addition of an Explorer XLT Sport Appearance package, Ford’s new Sync 3 infotainment interface and optional running boards (late availability).

Plenty of high-tech features that are easy to use; cargo space is generous behind the third row; turbocharged V6 engine delivers plentiful power; cabin is quiet and comfortable on the highway.

When it comes to hauling a larger family around, shoppers who don't want to go the minivan route often turn to midsize SUVs. And in the world of three-row SUVs, the 2017 Ford Explorer is one of the most well-rounded.

The new model year sees the introduction of a package available on XLT model Explorers called the Sport Appearance package. Added features include dark gray accents on the 20-inch wheels, grille, mirror caps and rear bumper appliqué along with black side moldings, roof rails and an Explorer hood badge. The package gives buyers the look of a Sport model without having to make the jump to the large turbocharged engine and Sport-level hardware. Inside, the package adds two-tone seats and door trim done up in dark gray leather and suede, as well as logo floor mats.

Additionally, XLT and higher grade models have the option to upgrade to Ford’s new Sync 3 infotainment system, which is more intuitive and quicker responding than the previous MyFord Touch system. The touchscreen uses swipe and pinch gestures and enhanced voice recognition with Siri integration. And when updates are available, the system will automatically update over Wi-Fi.

The Explorer spans a wide price range, from the low $30Ks for a base model to nearly $60K for the fully loaded Platinum trim, and its road mannerisms vary about as much as well. Where the base model makes do with less power and drives bigger than it looks, the Sport trim’s sharper handling and punchy turbo V6 engine shrink the Explorer from behind the wheel. There’s seating for up to seven passengers, which falls behind others in the segment that will carry eight, but it offers an above-average towing capacity of 5,000 pounds when properly equipped.

Naturally, there are other good options for three-row SUVs to consider. If you’re looking to maximize your cargo space and towing capability, the 2017 Chevrolet Traverse is worth checking out. There’s also the all-new 2017 GMC Acadia, which is slightly smaller than the previous model but more efficient. Both the Honda Pilot and the Toyota Highlander are excellent options thanks to their big cabins and comfortable rides.

For the XLT, option packages include Equipment Group 201A, 202A and the new Sport Appearance package. The 201A bundle adds a foot-activated liftgate, dual-zone automatic climate control, remote start, a 10-way power passenger seat, a nine-speaker sound system and the Driver Connect package (auto-dimming rearview mirror, an 8-inch touchscreen display with new Sync 3 interface, configurable gauge cluster displays, an SD card reader and upgraded Sync functionality). The 202A package includes all of the 201A equipment plus leather upholstery, heated front seats and front parking sensors. The new Sport Appearance package includes a dark gray treatment for items including the 20-inch wheels, grille, mirror caps and rear bumper appliqué. Inside, the package adds leather and suede two-tone seats and door trim done up in the same dark gray, along with Explorer logo floor mats.

At the top of the Explorer food chain is the Platinum. It includes the Sport's 401A package items plus satin chrome exterior trim, a dual-panel sunroof, adaptive cruise control, forward collision warning with brake support, active parking assistance, lane keeping assist, rain-sensing wipers, upgraded leather upholstery, and aluminum and wood interior trim. The only options for the Platinum are the rear entertainment system and the second-row captain's chairs with power-assist fold.

Standard on the base and XLT trim levels is a 3.5-liter V6 engine that produces 290 horsepower and 255 pound-feet of torque. With this engine, you have your choice of standard front-wheel drive or optional all-wheel drive. The latter gets hill descent control, hill start assist and Ford's Terrain Management System, which is a driver-selectable system that optimizes traction for a variety of driving situations.

According to the EPA, a front-wheel-drive 2017 Explorer with the V6 will deliver 20 mpg combined (17 city/24 highway). With all-wheel drive, the V6 drops slightly to 19 mpg combined (16 city/23 highway). In Edmunds testing, an AWD Explorer Limited with the base V6 went from zero to 60 mph in 8.4 seconds, which is about average for this size of vehicle.

Optional on base, XLT and now standard on Limited Explorers is the fuel sipper of the group, a turbocharged 2.3-liter four-cylinder engine rated at 280 hp and 310 lb-ft of torque. A six-speed automatic and front-wheel drive are standard; all-wheel drive is optional. Fuel economy rises to 22 mpg combined (19 city/27 highway) with front-wheel drive and 21 mpg combined (18 city/25 highway) with AWD. Properly equipped, the four-cylinder Explorer can tow 3,000 pounds.

The Explorer Sport and Platinum trims come with a turbocharged 3.5-liter V6 engine rated at 365 hp and 350 lb-ft of torque. A six-speed automatic and all-wheel drive are standard. The EPA says to expect 18 mpg combined (16 city/22 highway). Properly equipped, an Explorer with either of the V6 engines can tow 5,000 pounds. In Edmunds testing, the Sport and Platinum models delivered a zero to 60 mph time of 6.3 seconds, which is very quick for this segment.

A rearview camera is standard on the Explorer, while a 180-degree front camera is optional. Rear parking sensors are also standard on all but the base Explorer. Optional on the Limited and Sport but standard on the Platinum is a forward collision warning system with brake priming (bundled with the adaptive cruise control), lane departure warning and lane-keeping assist (Limited only), a blind-spot monitoring system (with rear-cross traffic alert) and inflatable seat belts for second-row outboard passengers. You can now get blind-spot monitoring with rear-cross traffic in the XLT this year as well.

In government crash tests, last year's Explorer earned a five-star rating (out of a possible five) for overall crash protection, with five stars for total front-impact protection and five stars for total side-impact protection. The Insurance Institute for Highway Safety gave its top score of Good for the Explorer's performance in moderate-overlap front-impact, side-impact and roof strength tests. It received the second-lowest rating of Marginal in the small-overlap front-impact test. Its seat belts and head restraints earned a Good rating for whiplash protection in rear impacts.

While the Explorer has the commanding ride height expected of an SUV, its thick roof pillars, high hood and tall dash limit outward visibility. Even with all of the available parking aids and cameras, the Explorer can still be a handful in tight spaces. From a fit and finish perspective, though, the interior is well-trimmed and tightly assembled. The materials used are attractive and luxurious, with a soft-touch dashboard and precise-feeling controls. The front seats welcome a wide variety of body types, and the cabin is exceptionally quiet as well.

The newly available Sync 3 interface further contributes to the Explorer’s premium vibe, with its high-resolution touchscreen, modern touch-gesture interface, and quick responses. Two additional screens within the gauge cluster also display a host of information. This is Ford’s most user-friendly system to date, and it’s a significant improvement over previous ones.

The Explorer's seating could be a bit disappointing for families looking for maximum space. Second-row comfort is decent, but overall it's not as roomy (particularly for installing rear-facing child safety seats) as you’d expect for a vehicle of this size. The third-row accommodations, meanwhile, very much depend on the second-row design. If you get the standard fixed bench, there's not much third-row legroom, allowing only small children to fit comfortably. Opting for the sliding second-row captain's chairs opens up considerably more legroom; however, we’d note the Explorer is reduced to six seat belts in that configuration. Cargo space in the Explorer is great with the seats in place but less competitive when all the seats are folded.

The Ford Explorer has a smooth ride quality on the highway with good composure that's only slightly affected by the available 20-inch wheels. It's also exceptionally quiet, so it's an excellent road-trip vehicle. It performs acceptably in typical driving situations, but overall it feels larger and less maneuverable than similarly sized rivals.

The Explorer Sport, on the other hand, feels much more fleet of foot, thanks to its sport-tuned suspension and steering that reacts quickly to inputs. And though the Sport gives up a bit of that cushy ride quality, it's still comfortable for this class of vehicle.

The Sport and Platinum trims also come standard with the turbocharged V6, and its V8-like power numbers result in quick acceleration that's unbeatable in the large crossover segment. The regular V6 isn't as peppy but should still readily meet the expectations for most three-row crossover shoppers. As for the turbocharged 2.3-liter four-cylinder, it's the least powerful of the three engines and can struggle to hold a gear on grades or authoritatively help you merge with freeway traffic. We have yet to subject it to instrumented testing, though, so check back later for specific details.