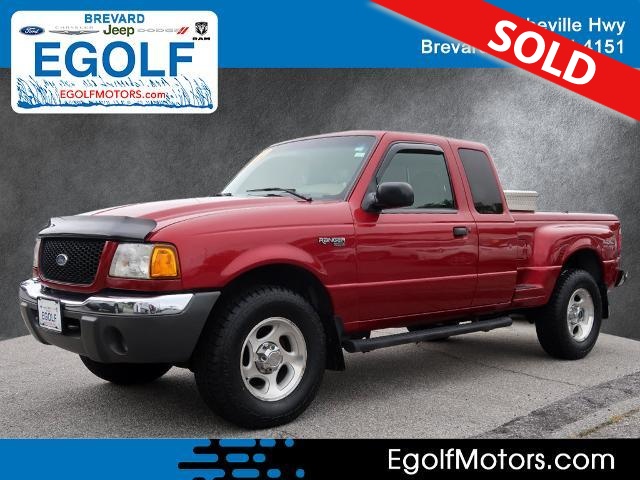 Priced below KBB Fair Purchase Price! 4.0L V6 SMPI SOHC, 4WD, ABS brakes. Call Egolf Motors in Brevard at 828-884-4151 then x 1. Weve been serving customers in Western North Carolina and upstate South Carolina for over 40 years where you feel like family when you walk through the door. Call Egolf Brevard at 828-884-4151. You make the drive, well make the deal and youll feel like family!

Despite its substantial age, the 2001 Ford Ranger is still one of the wiser choices in the compact truck market.

Most notable for the 2001 Ford Ranger is the availability of the Explorer's 207-horsepower, 4.0-liter SOHC V6. In other engine news, the flexible-fuel feature on the 3.0-liter V6 has been dropped and there will also be a new base 2.3-liter four-cylinder coming soon after the model-year introduction. ABS is now standard on all models. A new Edge trim level has a monochromatic appearance, which includes color-keyed bumpers and wheel lip moldings. Exterior changes are numerous. All models get a new grille, bumpers, and headlamps, while the XLT 4x4 and Edge get a new hood and wheel lip moldings. Four colors are new as well as an optional in-dash, six-disc CD changer.