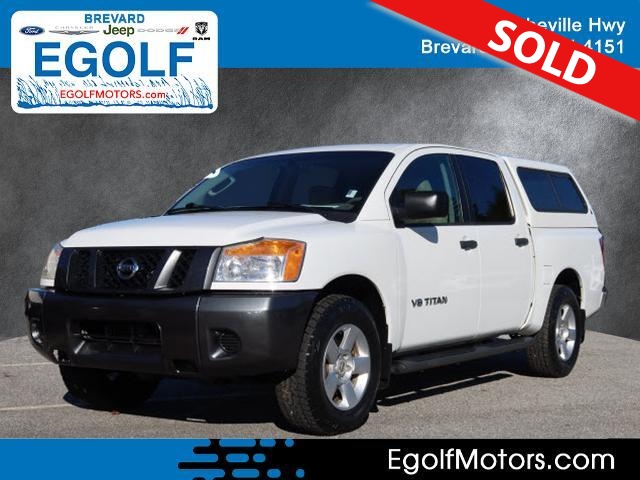 4D Crew Cab, Endurance 5.6L V8 DOHC 32V, 5-Speed Automatic with Tow-Haul Mode, ABS brakes, Low tire pressure warning. Call Egolf Motors in Brevard at 828-884-4151 then x 1. Weve been serving customers in Western North Carolina and upstate South Carolina for over 40 years where you feel like family when you walk through the door. Odometer is 56089 miles below market average! Call Egolf Brevard at 828-884-4151. You make the drive, well make the deal and youll feel like family!

Though deficient in a few areas, the 2008 Nissan Titan is still well-suited for a range of truck buyers thanks to its stout V8, roomy interior and loads of useful features.

The 2008 Nissan Titan receives its most significant update since its 2004 debut. Major changes include the availability of a new long-wheelbase model, freshened exterior styling, interior design improvements and new features.

The United States ? home of an $11.7-trillion GDP and Walker, Texas Ranger ? should know a thing or two about swagger. It's little wonder, then, that domestic manufacturers invented and cornered the full-size truck market. So when Nissan debuted its aptly named Titan truck a few years ago, the prognosis was uncertain. Would an import-brand manufacturer really be able to get to the heart of this quintessentially American market segment?

The answer turned out to be yes with an asterisk. On sale since the 2004 model year, the Nissan Titan matched up well in terms of towing and hauling capability, and excelled in terms of design and road manners. However (and here's that asterisk part), sales have not exactly pegged the swagger meter. In fact, the Nissan Titan has typically been the least popular full-size pickup in terms of sales. So for 2008, Nissan is making changes in hopes of improving the vehicle's appeal.

Most significant is the new long-wheelbase model. The 20-inch-longer wheelbase is available on both extended-cab and crew-cab trucks. Truck buyers who were previously put off by the Titan ? contractors or those who do a lot of hauling ? will no doubt appreciate the new cargo bed lengths. Long-wheelbase versions of the crew cab and extended cab have 7-foot and 8-foot beds, respectively.

There are other changes for the Titan this year, as well. The exterior has been updated with revised front-end styling, while the interior features new designs for the seats, center stack and gauge cluster. Feature-wise, the 2008 Nissan Titan can now be had with Bluetooth connectivity and factory-installed satellite radio, and the optional rear-seat entertainment screen is a little bigger than before. Nissan has also introduced a new trim level ? the Pro-4X ? but it's pretty much just a new name for the equipment offered in last year's optional off-road package.

All of these changes have made this year's Titan the best yet. Unfortunately for Nissan, a lot of media attention is on the Toyota Tundra and GM trucks right now, both of which received full redesigns last year. In a comparison test conducted last year, the Titan ranked behind the new Tundra and Silverado, and we found it outclassed in terms of capability and comfort.

But look past all that and you'll see that the 2008 Nissan Titan is a still a very desirable truck. That it lacks a full range of body styles or a V6 engine shouldn't matter much to the mainstream, truck-buying consumer. Though you'll obviously want to shop around before making a decision, we have no problem recommending the Titan.

The 2008 Nissan Titan is available with two-wheel or four-wheel drive. There is only one drivetrain combination: a 5.6-liter V8 hooked up to a five-speed automatic transmission. The V8 is rated at 317 horsepower and 385 pound-feet of torque. With the optional tow package, the Titan extended cab is rated to pull up to 9,500 pounds. (The crew cab maxes out at 9,400.) The standard five-speed automatic transmission features a tow-haul mode for handling heavy loads.

Antilock disc brakes with brake assist are standard on all Titan models. Front-seat side airbags, full-length side curtain airbags and stability control are optional on all trims, except the XE. In National Highway Traffic Safety Administration crash testing, the Titan received a perfect five stars for driver protection in frontal impacts and four stars for passenger protection. The Titan earned a "Good" rating (the highest possible) in Insurance Institute for Highway Safety frontal-offset crash testing.

Both extended-cab and crew-cab Titans feature a spacious and functional interior design with easy-to-use controls and numerous storage bins. Materials quality is only average, but build quality is generally very good. The rear seats fold up to provide a large load floor for hauling items inside the cab, and the rear doors on extended-cab models open nearly 180 degrees for easier access. The Titan is a great cargo carrier thanks to the optional Utility Bed Package with its durable spray-on bedliner, movable tie-down cleats, handy tailgate illumination and driver-side lockbox

The 2008 Nissan Titan's precise, linear steering and nicely weighted effort make the truck relatively nimble and easy to drive quickly on pavement. However, a stiff ride quality (especially on Pro-4X models) can make the Titan feel skittish in off-road situations. The Nissan Titan's tractable 5.6-liter V8 delivers plenty of muscle, right from idle. It sounds great, too, but that booming exhaust note can grow tiresome on long drives.