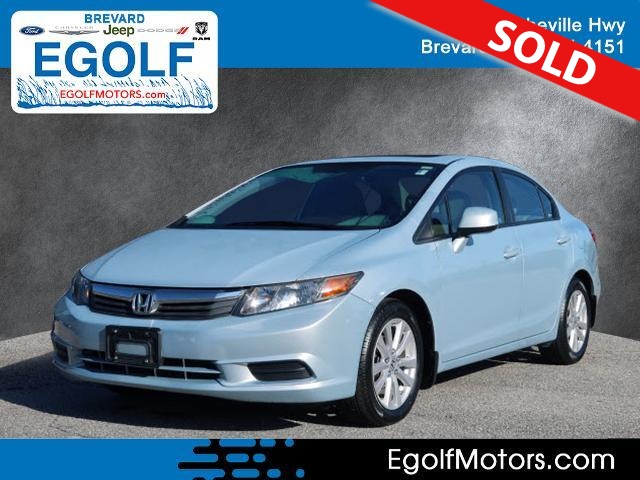 The all-new 2012 Honda Civic remains a strong contender in the compact car category, but other new models now effectively match the Civic and threaten its traditional dominance in the marketplace.

The 2012 Honda Civic has been fully redesigned. Highlights include mild styling updates, improved fuel economy and more power for the Si model.

For a new compact car to stand out in an increasingly competitive category, you'd think it should offer more than just a few subtle improvements. So we find ourselves in a rather unfamiliar position with the redesigned 2012 Honda Civic.

For years, the lineup of Civic models has been so much better than the competition that it has been a no-brainer to recommend one of these cars. But in the last few years, competing automakers have introduced some very impressive small cars. So while the ninth-generation Honda Civic is a very good and likable automobile, we have to wonder if the subtle changes to its design and engineering features will be enough to sustain its class supremacy. These days, even the least expensive models from competitive brands offer reliable powertrains, advanced safety features, top-quality interior materials and high-tech options.

To Honda's credit, the changes to the new Civic are welcome, even if they don't exactly leap out at you. Fuel economy remains pretty much the same as before for most Civic models, but there's a new Civic HF variant that's rated for 41 mpg highway. Fuel efficiency and power are improved for the Civic hybrid model as well, while the Civic Natural Gas remains the only factory-made car to be so fueled. As for the sporty Civic Si, it gets a new 2.4-liter engine that produces a welcome boost in torque compared to last year's 2.0-liter.

In terms of features, stability control is now standard throughout the model lineup. Other upgrades for 2012 include more interior room (3 inches of additional shoulder room up front and another 1.6 inches of rear legroom), and a few new technology features such as a 5-inch information display, the increased availability of iPod connectivity and an economy mode designed to help deliver maximum mpg.

Considering these improvements, the 2012 Honda Civic is still a solid pick with which buyers of compact cars will be pleased. But it's no longer the only game in town. We'd recommend test-driving this new Civic back to back with new competing models like the 2012 Chevrolet Cruze, 2012 Ford Focus and 2012 Hyundai Elantra. All three provide excellent fuel economy, and each holds selective advantages over the Civic in terms of interior design, feature content and value. The Civic Hybrid is pretty much in a class by itself, though you could also consider the equally frugal 2012 Volkswagen Jetta TDI. Meanwhile, gearheads lusting for some sport should also test the 2012 Mazdaspeed 3, 2012 Mini Cooper S and 2012 Volkswagen GTI.

The 2012 Honda Civic is a compact car offered in both coupe and sedan body styles. Mainstream models are offered in four trim levels, ranging from the base DX, to the midrange LX and EX and the top-of-the-line EX-L.

A new fuel-efficient HF sedan starts out with standard features similar to those of the LX sedan, then adds a few upgrades designed to deliver maximum mpg. These include low-rolling-resistance tires and aerodynamic cast-aluminum wheels, wind-cheating underbody panels and a rear spoiler.

The Civic Hybrid sedan is available in two trim levels. The base model's list of standard features is similar to the mainstream EX sedan, with the addition of 15-inch alloy wheels and low-rolling-resistance tires, outside mirrors with built-in turn signals, LED taillights, a rear spoiler and a 160-watt, six-speaker stereo. The top-of-the-line "Leather" trim level adds extras found on the regular EX-L including heated mirrors, leather upholstery and heated front seats.

The sporty Si coupe and sedan come in a single trim level that includes 17-inch alloy wheels, a bigger engine, a limited-slip front differential, a sport-tuned suspension, foglights, front and rear spoilers and a chrome exhaust tip. Inside upgrades include most of the items from the EX model's standard features list plus front sport seats, a leather-wrapped steering wheel, an aluminum shift knob, red backlit gauges, a special Power Monitor display.

A navigation system with voice controls, satellite radio and real-time traffic updates is optional on all but the DX and LX.

The front-wheel-drive 2012 Honda Civic is powered by a 1.8-liter four-cylinder engine that puts out 140 horsepower and 128 pound-feet of torque. Transmission choices include a five-speed manual and an available five-speed automatic (HF and EX models get the automatic as standard equipment). This combination returns EPA fuel economy estimates ranging from a low of 28 mpg city/36 mpg highway and 31 mpg combined in mainstream versions equipped with a manual transmission to a high of 29/41/33 in the HF model. In Edmunds performance testing, a Civic EX-L went from zero to 60 mph in 9.2 seconds -- an average time for this segment.

The Civic Natural Gas features a version of the same 1.8-liter engine powered by, as its name suggests, natural gas. It produces only 110 hp and 106 lb-ft of torque, however. A five-speed automatic is standard. EPA-estimated fuel economy is the gasoline equivalent of 27/38/31 mpg.

The Civic Hybrid gets a larger 1.5-liter gasoline four-cylinder engine and a more powerful electric motor for 2012, a combination that's good for 110 hp and 127 lb-ft of torque. A continuously variable automatic transmission (CVT) is standard. In Edmunds testing, it hit 60 mph in 10.1 seconds -- on par with most economy hybrids. Not surprisingly, this powertrain is the most fuel-efficient of the bunch, with EPA numbers of 44/44/44, an increase of 3 mpg over the outgoing model.

The Civic Si's engine also grows in displacement to 2.4 liters, which bumps output to 201 hp and 170 lb-ft. A six-speed manual is the only transmission offered. Despite this increased punch, EPA fuel economy estimates are still quite decent at 22/31/25. In Edmunds testing, an Si coupe hit 60 mph in 6.9 seconds, which is on par with the Mini Cooper S and VW GTI but slower than the Mazdaspeed 3 and Subaru WRX.

The 2012 Honda Civic comes with standard safety features that include stability control, antilock brakes (four-wheel discs with the EX and Si), front-seat side-impact airbags and side curtain airbags. In Edmunds brake testing, the Civic EX-L came to a stop from 60 mph in a longish 131 feet, with prevalent brake fade. The Hybrid was a bit better with a stop of 124 feet, while the Si's brakes performed much better, with a stop of 120 feet and much less fade.

In government crash testing, the Civic sedan received a perfect five stars in the overall, frontal and side crash categories. The Civic coupe received four stars in each. The Insurance Institute for Highway Safety gave the Civic sedan the highest possible rating of "Good" in its frontal-offset, side and roof strength tests.

Interior changes are very minor for the 2012 Honda Civic. The two-tier dash display carries over but now includes a 5-inch monitor that displays information for audio, hands-free phone use and various vehicle systems. The cabin has picked up a tad more passenger room, and it's most noticeable for front seat sedan passengers who have more shoulder and elbow room, and seat adjustability. The trunk has also grown, offering a total of 11.7 cubic feet of cargo capacity in the coupe and 12.5 cubic feet in the sedan. The hybrid models sacrifice trunk space to the battery pack, leaving 10.7 cubic feet. The large fuel tank needed for the Natural Gas model curtails trunk space even further.

Most controls are well-placed, and the keypads and menu buttons on the steering wheel are intuitive enough for anyone who's spent time with a smartphone. But it's an overload of input sources; there can be up to 14 buttons and directional commands on the steering wheel alone, and the dash design that features the navigation system looks quite busy. Also the extensive use of low-budget hard plastics makes the cabin feel cheap, especially compared to competitors that have invested in upgraded materials for their interiors.

Although the changes to the 2012 Honda Civic aren't radical, this is still one of the better-driving cars in its class. Both the coupe and sedan use shorter wheelbases than their predecessors and feel well-balanced and light on their feet. Power from the 1.8-liter engine is certainly adequate when fueled by gasoline; the Natural Gas is very slow. However, the automatic transmission's propensity to upshift early can be annoying. Wind noise is also a problem with the Civic, as it's noticeably louder than its competitors. This makes the Civic seem less refined on lengthy highway trips, despite one of the most comfortable and composed rides in the class.

The 2012 Honda Civic Si is still a fun car to drive. Refined suspension tuning, improved electric-assist power steering and additional torque at lower rpm give it a sharp attitude in and out of corners. But from a performance standpoint, it continues to be outclassed by the more muscular Mazdaspeed 3.