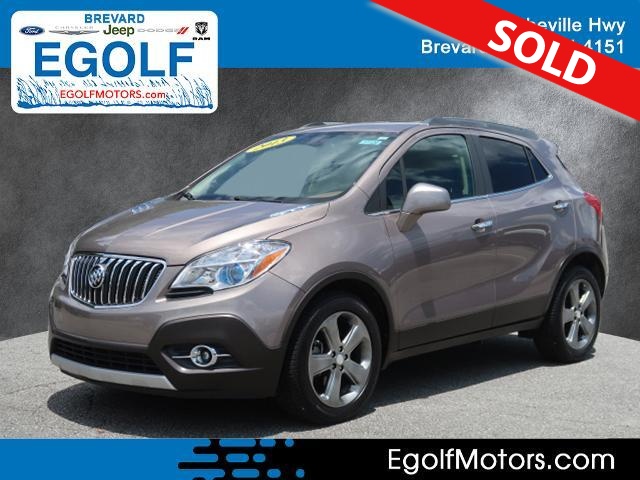 Thanks to its serene cabin, user-friendly high-tech features and nimble size, the 2013 Buick Encore should work well for those shopping for an upscale but still affordable small crossover SUV.

Buick has successfully been revamping and expanding its vehicle lineup the past few years, but one thing missing has been a crossover SUV smaller than Buick's already quite large Enclave. For consumers, that situation finally gets addressed with the 2013 Buick Encore.

The first thing you'll likely notice about the new Encore is its petite size. At 168 inches long, the Encore is about 10 inches shorter than a Honda CR-V. This aligns with the recent industry trend of offering truly compact crossover SUVs, with other examples being the Nissan Juke, BMW's new X1 or Mini's Cooper Countryman.

Pleasingly, the Encore delivers on Buick's traditional strengths. It's impressively quiet at freeway speeds, and the suspension keeps occupants comfortable by swallowing up bumps and ruts with utter composure. You also get plenty of standard features, an elevated driving position, available all-wheel drive, an easy-to-park size and high fuel economy. The Encore's price is also quite reasonable.

On the downside, the Encore's engine, a 1.4-liter turbocharged four-cylinder shared with the Chevrolet Cruze and Sonic, is underwhelming. Its 138 horsepower is outmatched by the Encore's 3,200 pounds, and that's not factoring in additional passengers or cargo you might be carrying. Not helping matters is the six-speed automatic's rush-to-the-top gear programming; it's meant to optimize fuel economy but also blunts the Encore's responsiveness.

Still, we do like the 2013 Buick Encore, and it could be a good choice for younger buyers or empty nesters. If you want more power, the BMW X1 is considerably more fun to drive, but it's also considerably more expensive. The 2013 Mini Cooper Countryman is also fun to drive and priced similarly, though rear seating is even tighter than in the Buick. The 2013 Volkswagen Tiguan would be another solid choice. As such, we suggest putting the new Encore on your test-drive list along with its rivals to help crystallize your decision.

Many of the upper trims' features are available as options on the lower trims. Other options, depending on trim level, include chrome wheels, a power sunroof, a navigation system and roof rack cross rails.

All 2013 Buick Encore models are powered by a turbocharged 1.4-liter inline four-cylinder with 138 hp and 148 pound-feet of torque. A six-speed automatic with a manual-shift feature is the only transmission offered.

Fit and finish throughout the Encore's cabin is generally pretty good, and well-placed soft-touch materials and splashes of wood tone and metallic accents provide a luxury vibe. Buick's standard IntelliLink system and its 7-inch control touchscreen dominate the center stack. There are a lot of buttons here, but we like the added redundancy they provide, and overall the Encore's IntelliLink is fast, reliable and easy to use as infotainment and smartphone app integration systems go.

Up front there's plenty of room all around, and the wide seats prove comfortable on long road trips. Those seats are also pleasantly high, providing a commanding view around and above traffic as well as easing entry/exit. In back, there's ample legroom even for 6-footers, though there's less rear shoulder and hip room than in most compact crossovers due to the 2013 Encore's narrower cabin.

When it comes to cargo-carrying duty, the Encore is ready, as the rear seats and the front passenger seat fold flat, allowing transport of longer (up to 8 feet) items. With all seats in place, there are 18.8 cubic feet of space. Folding the rear seats down expands that to 48.4 cubes; this is noticeably better than the Mini Countryman (42.2 cubic feet), but noticeably less than you'll get from the next-size-up compact crossovers such as the Honda CR-V, which offers a comparatively cavernous 71 cubic feet with the rear seats folded.

Today's Buicks drive with a sort of relaxed, composed comfort. They sail over road imperfections but do so without the bobbing and weaving we used to associate with cars wearing the Buick crest. Despite its small size, the Encore has this same sense of planted, on-road composure. In addition to its high fuel efficiency, the Encore's engine also scores points for its refinement. Cruising at high speeds, it's beyond whisper-quiet thanks to a number of "quiet-tuning" tricks, including an active sound-cancellation system by Bose.

As the Encore expectedly rides higher than a sedan or wagon, its center of gravity is likewise elevated, making it lean more when you press it into corners. Anyone who's coming into the Encore from a crossover or SUV won't notice a thing, but buyers stepping into a crossover for the first time will notice that cornering isn't quite as crisp. There's a surprising amount of grip, though, especially considering that the Encore's tires were chosen more for on-road quiet than all-out handling.

The 2013 Buick Encore's dynamic liability is its turbocharged 1.4-liter engine. That engine works fine in the much lighter Sonic, but the result here is that the Encore feels slow, and not just by leadfoot standards, but by the standards of anyone who feels the need to accelerate to highway speeds. Not helping matters is the Encore's transmission programming, which races to 6th gear as quickly as possible and is reluctant to downshift.