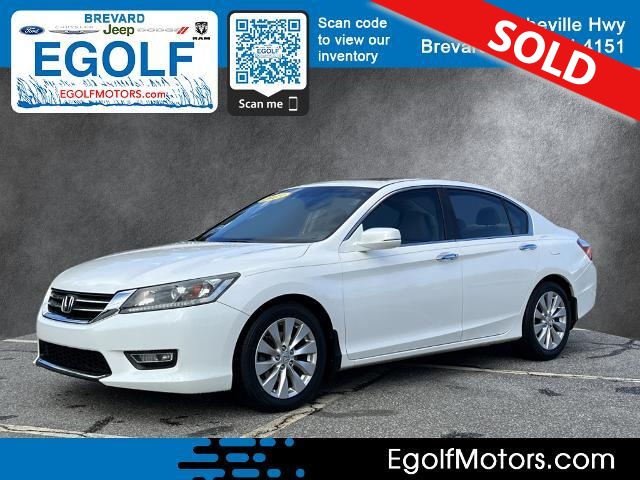 RECENT ARRIVAL ! LOCAL TRADE ! SUNROOF & LEATHER WITH HEATED SEATS ! Ivory w/Perforated Leather-Trimmed Seats. Call Egolf Motors in Brevard at 828-884-4151 then x 1. Weve been serving customers in Western North Carolina and upstate South Carolina for over 40 years where you feel like family when you walk through the door. 27/36 City/Highway MPG Awards: * 2013 KBB.com Brand Image Awards Kelley Blue Book Brand Image Awards are based on the Brand Watch(tm) study from Kelley Blue Book Market Intelligence. Award calculated among non-luxury shoppers. For more information, visit www.kbb.com. Kelley Blue Book is a registered trademark of Kelley Blue Book Co., Inc. Call Egolf Brevard at 828-884-4151. You make the drive, well make the deal and youll feel like family! Reviews: * The Honda Accord is the Labrador retriever of sedans. If you want a hassle-free, pleasing family car with a reputation for quality and an immediate familiarity, its hard to go wrong with the Accord. Coupe versions, meanwhile, add an element of sportiness, especially when fitted with the strong V6 engine. Source: KBB.com

The fully redesigned 2013 Honda Accord returns to the top of the family-sedan class with a mix of excellent packaging, superb fuel economy and rewarding performance.

The Honda Accord is fully redesigned for 2013.

It's always a major occasion when the Honda Accord comes due for a redesign. The Accord is one of the best-selling cars in North America, and this midsize sedan and coupe are snapped up at a rate of more than 1,000 a day. Fully overhauled, the 2013 Honda Accord is new from the inside out.

The new Accord is slightly smaller than the car it replaces, yet it's still among the most spacious and accommodating cars in its class. Interior materials have been upgraded, and the revamped cabin is stocked with the connectivity features that today's consumers expect. Of course there are significant mechanical changes, too, and they've resulted in an Accord that delivers strong performance, outstanding fuel economy and precise handling.

After a long wait, Honda has finally added power- and efficiency-enhancing direct-injection technology to the Accord's standard 2.4-liter four-cylinder engine. The four-cylinder is now paired with a continuously variable transmission (CVT) that takes the place of a conventional automatic transmission. The engine and the CVT work so well together that most drivers will be perfectly happy with the change, especially since the CVT-equipped Accord earns an EPA-estimated 27 mpg city/36 mpg highway and 30 mpg combined rating, which are excellent numbers for a conventional gasoline-powered midsize sedan and even better than those of the diminutive Honda Fit.

The 2013 Honda Accord's styling is a careful evolution from its predecessor, and to our eyes, it's visibly less bulky. Inside, the design is cleaner and more coherent, and even base LX models set you up with Bluetooth, a USB input and Pandora integration for smartphones. Further up the ladder is the new HondaLink connectivity system, which integrates Internet audio streaming, social media applications and cloud-based content through iPhone and Android apps. Yet there's still plenty of get-it-done sedan functionality here, too, as you'll find plenty of storage slots and a big trunk.

Although we consider this a highly effective redesign, the 2013 Honda Accord is just one of many excellent choices for a midsize car. The revamped Nissan Altima has a sportier personality and slightly higher fuel economy ratings with its base four-cylinder engine. The Toyota Camry and Volkswagen Passat offer similar interior space and a softer ride (depending on the trim level), while the Kia Optima offers impressive value for this class. And it's hard to ignore the stylish bodywork on the Ford Fusion. Narrowing down your choices in this group won't be easy, but if you want a midsize sedan that does nearly everything right, the Honda Accord should be on your list.

The 2013 Honda Accord is available as a midsize sedan and coupe. Four-cylinder sedans come in five trims: LX, Sport (new for 2013), EX, EX-L and EX-L with Navi. Opt for the Accord's 3.5-liter V6 and three trims are offered: EX-L, EX-L with Navi and Touring.

Opting for the new Sport trim brings a bit more horsepower, 18-inch wheels, a rear spoiler, an eight-way power driver seat (with power lumbar) and a leather-wrapped steering wheel with shift paddles for the CVT. Compared to the LX, the Accord EX trim gets you 17-inch wheels, heated mirrors, a sunroof, keyless ignition/entry, the power driver seat, the leather-wrapped steering wheel, Honda's new LaneWatch blind-spot display and a six-speaker sound system.

The EX-based trim levels for the 2013 Honda Accord sedan with the V6 engine are pretty similar to those for the four-cylinder EX models. The V6-exclusive Touring sedan tops the range, combining LED headlights and adaptive cruise control with the equipment from the EX-L with Navi.

For the coupe version of the 2013 Honda Accord, the base LX-S trim is similar to the LX sedan. The coupe's EX trims are also comparable in terms of equipment, though the V6-powered EX-L has 18-inch wheels.

Most of the front-wheel-drive examples in the Accord range are fitted with the 2.4-liter inline-4, whether sedan or coupe. For all coupes and sedans except the Sport trim, the engine generates 185 horsepower and 181 pound-feet of torque, some 8 hp and 20 lb-ft better than the previous base-model Accord's four-cylinder. The Sport trim's less restrictive dual exhaust frees up the engine to the tune of 189 hp and 182 lb-ft of torque.

The 2013 Accord's 3.5-liter V6 is upgraded this year and now develops 278 hp and 252 lb-ft of torque. Backed by a conventional six-speed automatic, the V6's fuel economy numbers are still quite impressive at 21/34/25. With the V6 running through the six-speed manual transmission in the Accord EX-L coupe, fuel economy drops to 18/28/22.

With the four-cylinder, performance is markedly improved. In Edmunds testing, a four-cylinder Accord EX sedan with the CVT accelerated from zero to 60 mph in 7.5 seconds, a very good time for the class. The V6 is notably strong; an EX-L V6 sedan we tested sprinted to 60 mph in just 6.1 seconds.

Worthy of particular mention is the LaneWatch blind-spot system (EX trim and above), which instantly switches the 8-inch screen's display to a low and expansive view of the passenger side of the car when the right turn signal is engaged. A camera in the right-side mirror dedicated to this function provides a confidence-inspiring view, and acclimating to catching the view in the center-dash display is quick and natural.

In Edmunds testing, a 2013 Accord sedan braked from 60 mph to a standstill in 128 feet, a slightly longer-than-average distance for a midsize family sedan.

In government crash testing, the Accord sedan received five out of five stars for overall and side crash protection, but four stars for frontal protection. The coupe actually earned five stars across the board. The Insurance Institute for Highway Safety gave both body styles the best possible rating of "Good" in the frontal-offset, side and roof strength tests. In the Institute's new "small overlap front crash" test, the sedan received a "Good" rating, while the coupe got a second-best "Acceptable." This is particularly noteworthy, as most vehicles have scored poorly in this new test.

When the revised Civic debuted last year, we were disappointed in its interior quality. Matters are much improved for the 2013 Honda Accord. With a few exceptions, the materials have a high-quality look and feel, while the overall cockpit design is elegant and well-constructed enough for a luxury car.

The center stack embraces the spirit of legibility with an effective three-tier layout. At the top is the 8-inch display that offers varying levels of information depending on trim level and the presence of audio/navigation. Meanwhile, the main instrument binnacle contains the right amount of information and not too much.

Despite the Accord's slightly smaller exterior dimensions, its interior room remains impressive. There is plenty of leg and shoulder space for front occupants, and rear-seat passengers should be quite comfortable and happy. Road and tire noise -- often a Honda bugaboo -- are noticeably reduced in the 2013 Accord thanks in part to two active noise-cancellation systems plus improved aerodynamics. We're also fond of the visibility afforded by the Accord cabin, which offers a lower beltline, slimmer roof pillars and a generous amount of glass.

Most Honda Accord buyers choose a four-cylinder engine, and you won't be disappointed in the new direct-injected 2.4-liter, which revs willingly and delivers its power in a smooth and satisfying manner. Although CVTs don't have the best reputation for refinement, Honda's new unit is the best of the breed, as it responds quickly in highway passing situations and then lets the engine rpm drop back smoothly when your need for quick acceleration has passed. It's so refined that most passengers mistake the CVT for a regular automatic transmission the first time they ride in the 2013 Accord. Of course, if you simply don't like CVTs, you could always get the V6 engine, which comes with a conventional six-speed automatic. Equipped with the V6, the Accord feels downright fast.

The 2013 Accord should be a front runner if you're looking for a midsize sedan or coupe that strikes a near-perfect balance between a supple ride and engaging handling. Although the Accord has never been a truly sporty car, this latest version feels particularly well-balanced around turns. The Accord's new electric-assist power steering might feel pretty light the first time you turn the wheel, but it's precise, with a crisp response that adds to the enjoyment of driving the car. One potential downside is the Accord's firm ride quality: If you're accustomed to a softer ride, a Camry or Passat might suit you better in this regard.