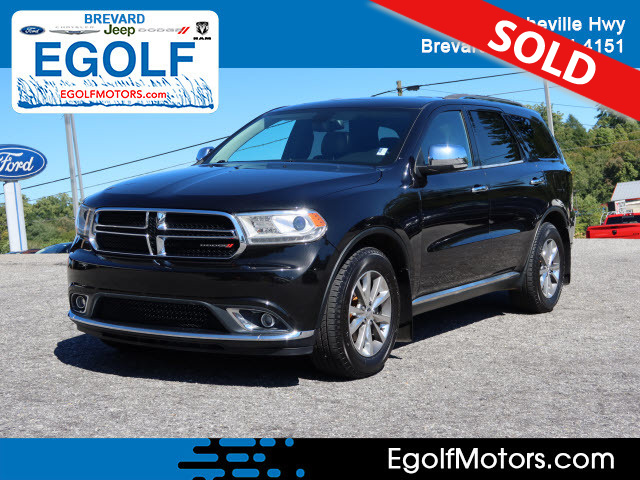 Durango Limited, 4D Sport Utility, 3.6L V6 Flex Fuel 24V VVT, 8-Speed Automatic, black Leather, 1-Yr SIRIUSXM Travel Link Service, Blu-Ray Compatible Dual Screen Video, Nav & Power Liftgate Group, Navigation System, Power 8-Way Driver Memory 8-Way Passenger Seats, Power Liftgate, Power Sunroof, Quick Order Package 23E, Radio: Uconnect 8.4AN AM/FM/SXM/HD/BT/NAV, Rear DVD Entertainment Center, Rear-Seat Video System, SIRIUSXM Traffic, SiriusXM Travel Link. Call Egolf Motors in Brevard at 828-884-4151 then x 1. Weve been serving customers in Western North Carolina and upstate South Carolina for over 40 years where you feel like family when you walk through the door. Call Egolf Brevard at 828-884-4151. You make the drive, well make the deal and youll feel like family! Reviews: * If you require a vehicle that can accommodate up to seven, tow up to 7,400 pounds and fit easily into your garage, the 2014 Dodge Durango tops a very short list. Unit-body construction yields high chassis rigidity and agile handling. And Dodge claims more than 60 safety and security features. Source: KBB.com * Easy to maneuver; high-quality interior materials; convenient third-row seats; powerful optional V8; generous towing capacity. Source: Edmunds * The 2014 Dodge Durango was designed to be distinctive and to start your pulse racing. Everything about the exterior of the Durango demands a second look. It has been restyled look more cohesive with the rest of the Dodge roster. These changes include new racetrack taillights an updated front grille, plus new sculpting on the fenders and hood, and projector beam headlights. On the inside changes are plentiful with a new control panel, customizable LCD screen instrument cluster, and an available rear Blu-ray and DVD system with dual 9-inch screens that are mounted on the backrest of the front seats. New for 2014, Dodge has introduced a new Durango trim as well, which is the Limited. The interior engages all your senses, from the soft touch mat

Thanks to its welcoming interior and excellent highway manners, the 2014 Dodge Durango is a great choice for a seven-passenger SUV.

The 2014 Dodge Durango gets a new eight-speed automatic transmission, revised front and rear styling, and an updated interior with newly available features like an 8.4-inch touchscreen display and a rear-seat Blu-ray player. Trim levels and equipment have also been shuffled.

The 2014 Dodge Durango is one of our favorite options for a six- or seven-passenger SUV. The current generation not only has the roomy seating and polished ride that you'd expect in a family-oriented, three-row utility vehicle, it also has an optional V8 engine and impressive tow ratings that you typically see only on larger, more traditional SUVs. For 2014, Dodge has updated the Durango to help it keep up with the competition in this price range. Although the even more aggressive styling is what you'll notice first, it's the less obvious changes that make the biggest difference on the 2014 Dodge Durango.

The changes in the cabin are particularly striking, as the Durango gets an all-new instrument panel and an updated dash that accommodates a large, intuitive 8.4-inch touchscreen that uses an upgraded version of the company's Uconnect system to provide smartphone app integration, text-to-speech capability for text messages and a more robust voice control interface. High-quality interior surfaces abound, and much like its Jeep Grand Cherokee cousin, the 2014 Durango feels decidedly upscale for its class.

On the mechanical side, the 2014 Durango has a new eight-speed automatic transmission, which serves up impressively smooth shifts while providing a numerically small but still significant improvement in EPA fuel economy ratings. The new transmission also makes better use of what power the base V6 engine has to offer -- although we've steered consumers toward the more powerful V8 in past years, a V6 Durango merits stronger consideration in 2014 due to its more energetic performance.

Of course, we'd still recommend the V8 if you intend to take frequent advantage of the 2014 Dodge Durango's towing capability, which, along with its rich interior is one of the best reasons to consider this SUV. However, the Durango doesn't provide as much cargo room as most of its rivals, and its ride quality and handling aren't quite up to snuff, either. Well-regarded family crossovers like the 2014 Chevrolet Traverse, 2014 Mazda CX-9 and 2014 Toyota Highlander offer considerably more capacity, a smoother ride and more capable handling. The updated 2014 Durango is appealing for its bold styling and refined interior, but its shortcomings elsewhere should also be considered.

The 2014 Dodge Durango large crossover SUV is available in four trim levels: SXT, Limited, R/T and Citadel. You'll also come across Durangos with Rallye badging; the Rallye is an equipment package on the SXT. Seven-passenger seating is standard across the board; optional second-row captain's chairs reduce capacity to six.

The Limited has most of the above equipment as standard but reverts to 18-inch wheels. It also comes with a remote ignition, leather upholstery, driver memory settings, a six-way power passenger seat, a 115-volt power outlet and an 8.4-inch touchscreen display with an upgraded version of Dodge's Uconnect system. The latter includes voice control, text-to-speech messaging capability, emergency roadside assistance, streaming Internet radio (delayed availability) and 3G Wi-Fi capability (via an extra-cost contract). The larger touchscreen and related infotainment features are optional on the SXT.

The R/T essentially includes the upgrades of the Limited (minus the roof rails) along with a V8 engine, 20-inch alloy wheels, a sport-tuned suspension, xenon headlights (low beams only), body-color accents (similar to the Rallye), a power liftgate and an upgraded nine-speaker sound system.

The Citadel reverts to a less aggressive suspension tune and a standard V6 engine, but otherwise builds on the R/T's equipment list, adding automatic high-beam control, automatic wipers, a sunroof, a power tilt-and-telescoping steering wheel, an eight-way power front-passenger seat, ventilated front seats, heated rear seats, and a navigation system with traffic updates and a Yelp-based search engine. All these amenities are optional on the R/T.

Optional on both the R/T and Citadel is the Technology Group, which includes adaptive cruise control, a forward collision warning/mitigation system and a blind-spot warning system with rear cross-traffic alerts. Also available on these trims is a rear-seat Blu-ray/DVD entertainment system with dual video screens and an HDMI input. Options for the whole lineup include a towing package, a skid-plate package (except R/T) and an in-dash CD player.

The 2014 Dodge Durango is offered with either a V6 or V8 engine, and all models come with an eight-speed automatic transmission. While the SXT only comes with the V6 and the R/T only comes with the V8, the Limited and Citadel trims can be equipped with either one. Depending on the model, rear-wheel drive, all-wheel drive or four-wheel drive is available. The light-duty AWD system is only available with the V6 engine. The on-demand 4WD system features dual-range gearing (which makes it more capable on rugged terrain) and is standard with the V8 engine.

The 3.6-liter V6 engine is rated at 290 horsepower (295 hp with the Rallye package) and 260 pound-feet of torque. The EPA's estimated fuel economy is 20 mpg combined (18 city/25 highway) with rear-wheel drive and 19 mpg combined (17 mpg city/24 mpg highway) with all-wheel drive. In Edmunds testing, a Durango equipped with the V6 and rear-wheel drive went from zero to 60 mph in 7.8 seconds, an average time for the class.

Properly equipped, a V8 Durango can tow up to 7,400 pounds, while the V6 version tops out at 6,200 pounds -- in either case, far more than most rival crossover SUVs can tow.

Antilock disc brakes, stability and traction control, trailer sway control, front side airbags and full-length side curtain airbags are standard on every 2014 Dodge Durango. A rearview camera and parking sensors are optional on the SXT and standard on all other Durangos.

Models with Uconnect Access (included with the 8.4-inch touchscreen) have an emergency telematics system that connects you with 911 operators at the touch of a button and provides stolen vehicle tracking. Optional on the Limited, Citadel and R/T is a blind-spot monitoring system with cross-traffic alerts. The Technology Group, available on R/T and Citadel models, now includes a more advanced forward collision warning and mitigation system that automatically applies the brakes in potential collision situations.

In government tests, the Durango received four out of a possible five stars for overall protection, with four stars for total frontal impact safety and five stars for total side-impact protection. In Insurance Institute for Highway Safety tests, the Durango earned the highest possible rating of "Good" for its performance in moderate-overlap frontal-offset, side-impact and roof strength crash tests. Its seat and head restraint design was also rated "Good" for whiplash protection in rear impacts.

In Edmunds testing a Durango in Limited trim with the V6 engine and rear-wheel drive came to a stop from 60 mph in 124 feet, which is average for this segment.

Modern and functional, the 2014 Dodge Durango's cabin has been designed with families in mind. Regardless of trim level, the design is attractive and features upscale materials.

With this latest update to the Durango, materials quality is now class-leading, and the cabin has an uncommonly elegant feel for this class. The available 8.4-inch touchscreen display is attractive and easy to use. The gauges look better, too, with crisp graphics and a useful trip computer display.

The front seats are roomy and comfortable, but the standard second-row bench has rather flat cushioning (which helps promote a flatter load floor when the seat is folded) and doesn't offer quite as much legroom as roomier rivals. The optional second-row captain's chairs, however, are as comfortable and roomy as the front seats. Access to the third row requires a moderate squeeze past the middle seats, even with the fold-and-tumble captain's chairs, but it's no more taxing than other SUVs in this class. As in its rivals, the third row seats are also confining for adults, and those low-mounted seat cushions make them better suited to smaller passengers.

With the second- and third-row seats folded down, the Durango can carry up to 84.5 cubic feet of cargo. This is a respectable amount, but competing large crossover SUVs like the Chevy Traverse and Mazda CX-9 offer considerably more cargo space.

Thanks in part to its light steering effort, the 2014 Dodge Durango is fairly easy to back into a parking spot, but unfortunately it remains light at higher speeds, too. This translates to a rather disconnected feeling from a twisting mountain road. The Durango is still as well mannered as any other SUV in these conditions, though it isn't as confidence-inspiring as you might think given Dodge's sporty brand image. We've also found the Durango's ride quality to be pretty mediocre when driving on stretches of rough pavement. Competitors like the Highlander or Ford Explorer are generally more comfortable.

Low-end torque is not a strong suit of the V6, but once the Dodge Durango is moving, the engine pulls respectably. Midrange acceleration is adequate for passing and merging, and there's a noticeable improvement in responsiveness with the new eight-speed automatic transmission. As expected, the V8 offers brisk all-around performance and a satisfyingly deep exhaust note on acceleration.