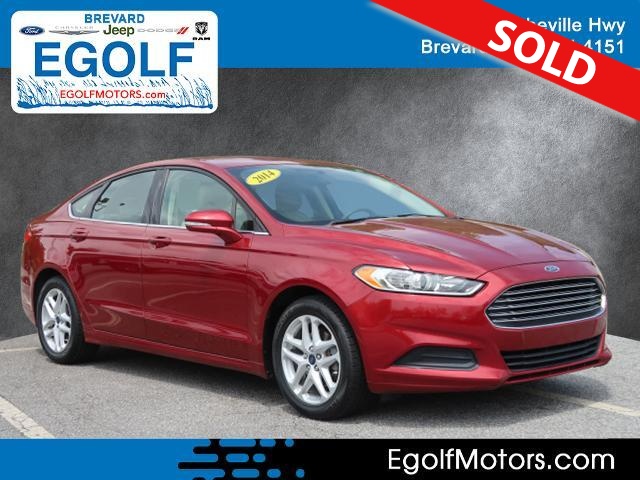 LOCAL TRADE ! PURCHASED AND SERVICED HERE ! ONE OWNER ! GREAT VALUE, GREAT PRICE ! THIS ONE WILL NOT LAST LONG ! 6-Speed Automatic. Call Egolf Motors in Brevard at 828-884-4151 then x 1. Weve been serving customers in Western North Carolina and upstate South Carolina for over 40 years where you feel like family when you walk through the door. 25/37 City/Highway MPG Awards: * 2014 IIHS Top Safety Pick+ * 2014 KBB.com 10 Best Hybrid Cars Under $30,000 * 2014 KBB.com 10 Best Sedans Under $25,000 * 2014 KBB.com Brand Image Awards Call Egolf Brevard at 828-884-4151. You make the drive, well make the deal and youll feel like family! Reviews: * If youre looking for a sporty sedan, a luxurious touring car, a fuel-efficient family car or just something to impress the neighbors, youll find it all in the 2014 Ford Fusion. Source: KBB.com * Fuel-efficient turbocharged engines; sharp handling; composed ride; quiet cabin; advanced technology and safety features; eye-catching style; available all-wheel drive. Source: Edmunds * The 2014 Ford Fusion has the upscale style and front grille that resemble higher-priced European vehicles, yet with a price tag families will appreciate. The interior has a sleek yet accessible modern look, complemented by shiny angled trim that adds to its edgy feel. Also, the Fusion has been given an assortment of interesting colors, boldly angled front headlights, and exciting new wheel designs. Plus, with engine choices that range from 175 to 240 Horsepower on various models, it has the power to add excitement back into your driving. The Fusion comes in 8 trims: the Base S, SE, S Hybrid, Hybrid SE, Titanium, Hybrid Titanium, Fusion Energi SE, and Fusion Energi Titanium. The Fusion has some notable innovations related to fuel, charging, and related capabilities. One is an Easy Fuel capless system when you fill up at the pump. The other is a lighted ring around the charge port on the Energi Plug-in model. It gets progressively brighter as the

With solid power, excellent fuel economy, provocative styling and a huge array of tech features, the 2014 Ford Fusion is a top choice for a midsize sedan.

For 2014, the Ford Fusion sees a number of minor changes. Chief among them are a new 1.5-liter four-cylinder engine option and some newly available features, including inflatable rear seatbelts, a heated steering wheel and ventilated front seats.

When it was redesigned last year, the Ford Fusion was an instant hit with midsize sedan shoppers thanks to its handsome styling, accommodating cabin and engaging handling. We expect more of the same with the 2014 Ford Fusion, which picks up a new engine along with a few additional luxury and safety features.

There's a variety of powertrains available for the Ford Fusion. Base Fusions are powered by a naturally aspirated (non-turbocharged) 2.5-liter four-cylinder, while a trio of turbocharged engines is available. New this year is a 1.5-liter turbocharged four-cylinder that joins the previously available 1.6-liter turbo-4. These two are the fuel economy champs of the 2014 Fusion lineup. In lieu of a V6 option, the Fusion also offers a muscular 240-horsepower 2.0-liter turbo that earns a solid 26 mpg rating for combined city/highway driving. This engine is also available with all-wheel drive, making the Ford Fusion one of the few midsize sedans to offer this traction-enhancing feature.

Another Fusion strength is cutting-edge convenience and safety technology. Highlights include adaptive cruise control, blind-spot detection, the Sync voice command system and even automated parking assist, which automatically steers the car into a parallel parking spot. There's also the latest generation of MyFord Touch, which utilizes a customizable touchscreen display to control many of the Fusion's electronics features. It's a cool feature in theory, but we've found MyFord Touch finicky and distracting to use.

That's really our only major complaint about the Fusion, though. Overall, the Ford's combination of classy styling, competitive fuel economy and useful features puts it right near the top of the midsize-sedan class for 2014. You'll see some familiar names here, including the Honda Accord, Kia Optima, Mazda 6, Nissan Altima, Toyota Camry and Volkswagen Passat. Each of these cars has certain advantages, but shoppers looking for a family sedan that provides an engaging driving experience, high-end technology options and head-turning looks will be well served by the 2014 Ford Fusion.

The Fusion SE (with the Technology package selected) and Titanium can also be equipped with a navigation system, an automated parallel-parking system, a heated steering wheel and adaptive cruise control with collision warning and brake intervention. For the SE and Titanium, Ford additionally offers the Luxury Driver Assist package, which includes automatic high-beam control, a 110-volt power outlet, blind-spot monitoring, rear cross-traffic alert and lane-departure warning and lane assist. A sunroof is optional for both the SE and Titanium, and the Titanium can be had with 19-inch wheels and ventilated front seats.

The Fusion S and SE come standard with a 2.5-liter four-cylinder engine that's rated at 175 hp and 175 pound-feet of torque. Power is sent to the front wheels through a six-speed automatic transmission.

For the SE, there are three engine options. There's a turbocharged 1.6-liter four-cylinder that produces 178 hp and 184 lb-ft of torque. It comes with a six-speed manual transmission only. Considering that, we expect the more popular option to be the new turbocharged 1.5-liter four-cylinder, which comes matched to a six-speed automatic. Power output is an estimated 178 hp and 177 lb-ft of torque.

The 2014 Ford Fusion comes standard with antilock disc brakes, traction and stability control, front seat side airbags, front knee airbags and side curtain airbags. The Ford Sync system includes an emergency crash-notification feature that automatically dials 911 when paired with a compatible cell phone. Also standard is Ford's MyKey, which can be used to set certain parameters for teen drivers.

Inside the 2014 Ford Fusion, tasteful style and high-quality materials abound. The dashboard and center stack are uncluttered and tastefully designed, although this down-to-business decor can also come across as stark and uninviting, especially with the all-black interior.

With the highly adjustable power driver seat, just about everybody should be able to find a comfortable driving position. The passenger seat is just as supportive, while the split-folding rear seats are well contoured and have plenty of legroom. The Fusion's swoopy styling cuts down on rear headroom a bit, but it's still comparable to its competition, with enough clearance for normal-size adults.

Less appealing are both of the Fusion's center stack control arrangements. The control layout in lower-level Fusions can be confusing given the array of similar-looking (and poorly labeled) buttons. The optional MyFord Touch system has a much cleaner look, but this system has its own problems. The 8-inch main display controls various audio, phone and navigation functions via voice (Ford's Sync), touch controls or buttons on the steering wheel. It's a smart idea in theory, and it provides some nice customization and smartphone integration possibilities. Unfortunately, there's a learning curve for the user, and we've found the system prone to glitches and slow to respond. In addition, many of the touchscreen icons are difficult to locate and press while on the move.

Trunk space stands at 16 cubic feet, which is slightly above average for this class.

It's impossible to go wrong with any of the 2014 Ford Fusion's engine choices. Even the base 2.5-liter engine offers competitive power, while the optional turbocharged engines provide an appealing blend of fuel efficiency and performance. The 1.5- and 1.6-liter engines are likely the best bets for most buyers, and they make the Fusion feel quicker than our acceleration testing numbers indicate.

On the highway, the 2014 Ford Fusion offers a comfortable and controlled ride. It's also remarkably quiet. What's really nice, however, is that these qualities don't come at the expense of engaging handling. Driven through turns, the Fusion is confident and composed, and the steering is remarkably communicative.