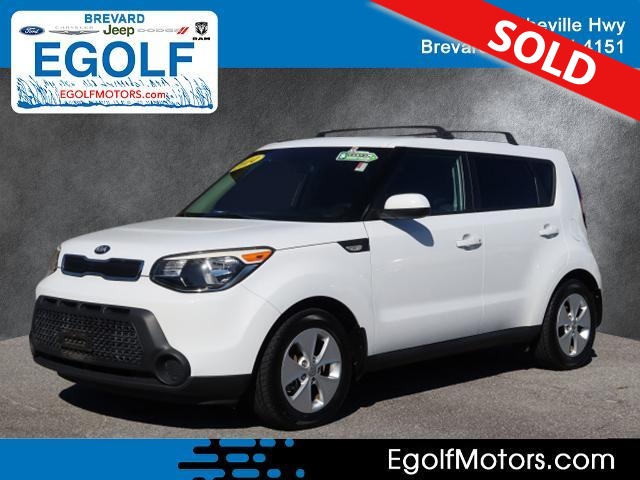 RECENT ARRIVAL ! LOCAL TRADE ! BLUETOOTH ! ALLOY WHEELS ! GREAT FUEL ECONOMY ! Call Egolf Motors in Brevard at 828-884-4151 then x 1. Weve been serving customers in Western North Carolina and upstate South Carolina for over 40 years where you feel like family when you walk through the door. 24/30 City/Highway MPG Awards: * JD Power Automotive Performance, Execution and Layout (APEAL) Study * 2014 KBB.com 10 Coolest New Cars Under $18,000 * 2014 KBB.com Brand Image Awards Call Egolf Brevard at 828-884-4151. You make the drive, well make the deal and youll feel like family! Reviews: * Loads of available features; attractive cabin with user-friendly controls and ample passenger space; long warranty. Source: Edmunds * Totally transformed, the 2014 Kia Soul is more fun to drive, has moreadvanced technology, and more surprises. It looks different because it is different. With its unique styling inside and out and impressive features its a new way to roll. Think of the Soul as your personal canvas. Its ready for custom touches. Unique colors inside and out for you to choose from. Plenty of optional accessories, like aluminum sill plates for the doors, all-weather floormats and bumper applique. For the finishing touch, a sunshade with the name Soul on it. Soul ! models have distinctive front LED accent lights and LED taillights to stand apart from the rest. Jump into the Soul and you can take on the road with confidence. Enjoy the strong performance of Souls 130-hp 1.6L engine or Soul + and ! models 164-hp 2.0L engine and 6-speed automatic transmission. Manual transmission is also available on Soul and Soul +. An available Eco Package on Soul+ includes Idle Stop & Go. It automatically turns off the engine when you come to a complete stop and then seamlessly restarts the engine when you release the brake pedal. Inside you will experience tons of standard features including 60/40 split-folding rear seats and Bluetooth. Available features include sunroof, push-button

The 2014 Kia Soul's funky styling and fun-to-drive attitude make it great for city commutes, and its hatchback versatility makes it practical as well.

Introduced four years ago, the Soul is one of Kia's best-selling models. We've always liked this small, box-shaped wagon's unique styling and generous level of equipment. The 2014 Kia Soul represents the car's first major redesign. Although it's not a radical change from the original, there are just enough improvements to make the Soul a compelling proposition for budget-minded buyers looking for an alternative to mainstream sedans and hatchbacks.

Although the base 1.6-liter engine's power ratings are down this year, the more powerful 2.0-liter four-cylinder engine that most Soul buyers choose is significantly revised. It still makes 164 horsepower, but this engine now delivers more thrust at low rpm, helping the Soul feel peppier during city driving.

The quality of interior materials is better this time around, too, and while passenger room is similar to last year, Kia has carved out more cargo capacity, which now tops out at a crossover-like 61 cubic feet. Optional equipment closely follows last year's Soul, but new items include a panoramic sunroof and an upgraded Uvo eServices package that includes streaming Internet radio capability for smartphone users.

On the whole, the 2014 Kia Soul is more appealing than your average entry-level sedan or hatchback, and it will certainly meet most consumers' daily-driving requirements. Depending on your needs, though, it's worthwhile to shop around a bit in this segment. The 2014 Ford Fiesta's sharper handling will appeal to enthusiast-minded drivers. Or, if you're really serious about fuel economy, you might prefer the 2014 Toyota Prius C.

Other fine choices include the 2014 Chevy Sonic and the original box-shaped wagon, the 2014 Scion xB, which boasts a massive 70 cubic feet of cargo space. If you're looking for more of a crossover, the 2014 Nissan Juke offers funky styling and available all-wheel drive, but it has far less cargo capacity than the Soul. Apart from its roomy interior, the 2014 Kia Soul doesn't have any major advantages over most of these rivals, but it's a well-rounded car that's worth considering if space, style and affordability are high on your priority list.

The 2014 Kia Soul is a four-door hatchback with seating for five. It's available in three trim levels: base, + and ! (also known as Plus and Exclaim).

There are several optional trim packages to choose from on the Soul+. The Uvo eServices package adds automatic headlights and the Uvo infotainment interface with voice control, Bluetooth audio connectivity, streaming Internet radio capability and a rearview camera (roadside assistance and maintenance reminders will be added to Uvo later in the 2014 model year). You can buy the Audio package in combination with the Uvo package and you'll get automatic climate control; a navigation system with an 8-inch touchscreen display, HD radio and an upgraded Infinity Audio system; speaker lights; and piano-black and satin-metallic interior accents. If you buy the Uvo and Audio packages, you can also order the Primo package, which adds a panoramic sunroof (eliminating the Soul's standard roof rack mounting points), foglights, keyless ignition, leather upholstery, a 10-way power driver seat, heated and ventilated front seats, heated rear outboard seats and a heated, leather-wrapped steering wheel and shift knob. Finally, the Eco package adds fuel-saving features like an automatic stop-start system and low-rolling-resistance 16-inch tires; note that it's not available in combination with any of the above option packages.

The front-wheel-drive 2014 Kia Soul is offered with two different engines. The base Soul gets a 1.6-liter four-cylinder with 130 hp and 118 pound-feet of torque. A six-speed manual transmission is standard (including a hill-start assist function) and a six-speed automatic is optional. The EPA's estimated fuel economy for the base Soul comes in at 26 mpg combined (24 mpg city/30 mpg highway) with either transmission.

Soul+ and ! models have a 2.0-liter four-cylinder that puts out a healthy 164 hp and 151 lb-ft of torque. A six-speed automatic is the only available transmission. Fuel economy with the 2.0-liter engine is an EPA-estimated 26 mpg combined (23 mpg city/31 mpg highway). Soul+ models with the Eco package fare slightly better, earning a rating of 27 mpg combined (24 mpg city/31 mpg highway). We've had little difficulty matching these mpg numbers in our testing, but they're below average among small wagons and hatchbacks.

In Edmunds performance testing, a top-of-the-line Soul! went from zero to 60 mph in 8.7 seconds, which is average for a small wagon or hatchback with an upgraded engine.

In Edmunds brake testing, the Soul came to a stop from 60 mph in 110 feet. While this is a very short distance for the segment, it's noteworthy that our Soul! test car had 235/45R18 tires (an exceptionally large tire size for a car in this class), and Kia Souls with smaller tires may not perform the same.

With its modern look and expressive styling details, the 2014 Kia Soul's cabin offers a nice balance between form and function. Quality materials make the interior feel more refined than you might expect for a car in this price range.

Gauges and controls are logically located and intuitive to use, and using the Uvo interface to control your smartphone is a snap. In addition to upgrading the sound quality, the optional Infinity audio system includes illuminated trim rings for the speakers that flash to the beat of your music. It's a little gimmicky, but we have a feeling some Soul buyers will find it kind of fun.

One of the benefits of the Soul's boxy design is abundant head- and legroom, even in the backseat. Behind the rear seatbacks you'll find 19 cubic feet of cargo room, which grows to 61 cubic feet with both sections of the 60/40-split rear seatbacks folded down. This is greater than most competitors, but those who need maximum schlepping capacity should consider the Scion xB as it offers a cavernous 70-cubic-foot cargo hold.

With respectable power on tap from the 2.0-liter four-cylinder engine, the 2014 Kia Soul is enjoyable around town and feels satisfyingly quick when merging onto a highway. The engine gets a bit raspy-sounding during hard acceleration, but the automatic transmission shifts smartly and does a good job of holding gears on uphill grades to help the car maintain a consistent speed. We've yet to drive the 1.6-liter base Soul, but we think most buyers will be happier with the gutsier 2.0-liter, especially since it's just as fuel-efficient.

Although the Soul doesn't feel especially sporty, it handles better than you might expect. The steering has a reassuring weightiness to its effort level at highway speeds, and it feels precise when you're driving around turns. The brake pedal has a reassuringly firm feel, too. Unfortunately, the Soul! model loses some of its appeal on long highway trips. Its large wheels and tires contribute to a rough ride, even on relatively smooth pavement. In addition, the Soul's boxy shape results in excessive wind noise at highway speeds.