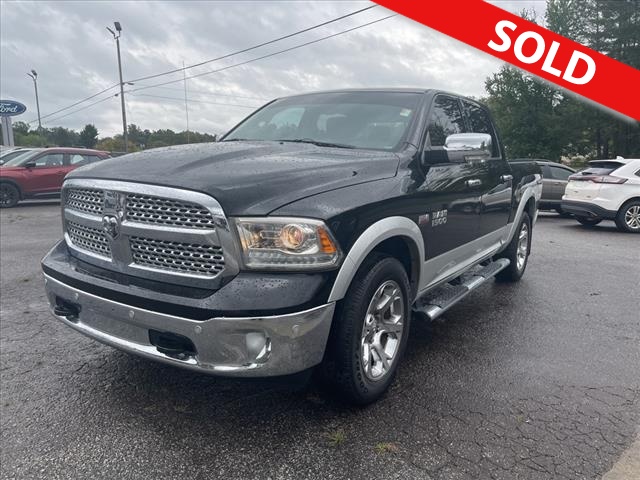 LARAMIE PACKAGE ! RECENT ARRIVAL ! LOCAL TRADE ! LEATHER AND HEATED SEATS ! REAR BACK UP CAMERA & BLUETOOTH ! 1500 Laramie, 4WD. Call Egolf Motors in Brevard at 828-884-4151 then x 1. Weve been serving customers in Western North Carolina and upstate South Carolina for over 40 years where you feel like family when you walk through the door. Awards: * Motor Trend Automobiles of the year Call Egolf Brevard at 828-884-4151. You make the drive, well make the deal and youll feel like family! Reviews: * If you want the only full-size pickup (so far) with the fuel economy of a smaller-displacement diesel engine yet all the pulling and working power youd expect, the 2014 Ram 1500 is for you. Source: KBB.com * Supple ride and composed handling; strong gas V6 or fuel-efficient diesel V6 available; available eight-speed automatic transmission improves fuel economy and towing abilities; refined and quiet cabin; useful tech features. Source: Edmunds * Function has never had a more impressive form. The exterior of the 2014 Ram 1500 is re-engineered to look and perform better. With active aerodynamics and an upgraded front fascia, its both beautiful and powerful. Available RamBox Cargo Management System offers lockable, lighted, drainable storage - perfect for storing tools, gear, and beverages. With new fabrics and leather trim choices for seats the interior of the Ram 1500 feels as good as it looks. From the displays to the stitching, its the most sophisticated Ram Truck experience yet. The 7-inch premium customizable screen lets you know whats going on inside, outside, and under the hood. With the Uconnect Access System, your truck can do double duty as a mobile office or entertainment center. The available 8.4-inch touchscreen offers available features like interior climate control and 3-D terrain maps. Bluetooth wireless connectivity, voice command, and steering wheel-mounted buttons mean youre always in complete control. Whether its the legendary power of a 5.7L HE