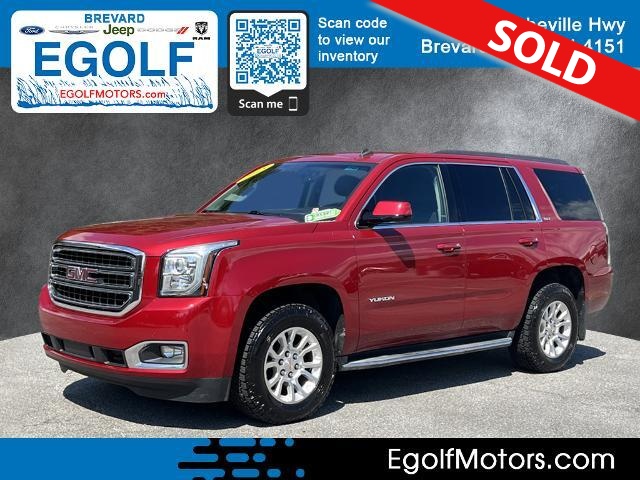 RECENT ARRIVAL ! LOCAL TRADE ! REAR BACK UP CAMERA & BLUETOOTH ! IN DASH NAVIGATION ! LEATHER HEATED & COOLED SEATS ! Yukon SLT, 4WD, Navigation System. Call Egolf Motors in Brevard at 828-884-4151 then x 1. Weve been serving customers in Western North Carolina and upstate South Carolina for over 40 years where you feel like family when you walk through the door. Awards: * JD Power Automotive Performance, Execution and Layout (APEAL) Study * 2015 KBB.com Brand Image Awards Call Egolf Brevard at 828-884-4151. You make the drive, well make the deal and youll feel like family! Reviews: * If you need no-compromises hauling and towing ability, along with a no-compromises, first-rate interior, the 2015 GMC Yukon and Yukon XL are just the ticket. That goes double for the high-end Denali models. Source: KBB.com * Strong V8 power; stout towing capacity; available nine-person seating capacity; extremely quiet highway ride; impressive interior quality. Source: Edmunds * Meet the all-new 2015 GMC Yukon. Its spacious interior offers three rows of seating that can accommodate up to nine passengers. With its bold styling, premium materials, and inspiring capability, Yukon creates a new standard in full-size utility. Yukon interior offers a perfect blend of craftsmanship, comfort and functionality. The proof is in the details, including authentic aluminum trim, contrast stitching on console and doors, and optional heated steering wheel. GMC engineers concentrated on every aspect of the Yukon to reduce cabin noise, resulting in an unparalleled driving experience as well. From its confident, aerodynamic proportions to its premium accents and refined finish, this sport utility vehicle lives up to its looks with superior capability, comfort, and towing capacity. Other stylings include wheels ranging from 18 up to 22 and full LED Turn Signals and Daytime Running lamps featuring GMCs Graphic Light Signature. The newly enhanced next-generation GMC IntelliLink system enables you

The 2015 GMC Yukon deserves strong consideration if you're shopping for a large, near-luxury truck-based SUV with impressive towing capacity. But for practical passenger and cargo use, a large crossover SUV might be a better choice.

Car shoppers who are in the market for a traditional full-size SUV have only a handful of choices these days. But among this group, one of the most compelling is the 2015 GMC Yukon. It blends traditionally rugged truck construction and V8 towing capacity with amenities and features one might expect from a full-fledged luxury SUV.

Sandwiched between its corporate siblings, the Chevrolet Tahoe and pricier Cadillac Escalade, this year's fully redesigned Yukon shows off a new look inside and out. This GMC also boasts some innovative and improved features as well as a choice of two V8 powertrains that are both more powerful and fuel-efficient than those sold last year. As a result of these improvements, the Yukon is still a capable workhorse, but it rides down a highway or up a mountain pass more efficiently, comfortably, quietly and confidently than ever before.

For the first time in the Yukon, the third-row seat folds into the floor instead of having to be removed (a key convenience that most rivals adopted years ago). Power-actuated second- and third-row seating is a new option as well, allowing those of small stature to more easily manage what used to be a cumbersome operation. Unfortunately, they will also need to contend with a higher load floor.

Another notable upgrade is a new 8-inch touchscreen interface with added smartphone integration functionality. Finally, the most up-to-date electronic safety features find their way into the Yukon's roster, including lane-departure warning, a blind-spot monitor and frontal collision warning and mitigation.

Of course, if you don't really need the 2015 GMC Yukon's 4-ton towing capabilities, you might consider a more space-efficient crossover SUV. Top choices in this class routinely offer equal or greater people- and cargo-hauling abilities without the trucklike driving dynamics. In fact, there's an excellent one of those in GMC's own showroom: the eight-passenger Acadia, which offers substantially more third-row space and cargo capacity.

If a tow-ready traditional SUV is must, others to consider are the 2015 Toyota Sequoia, which presents a very similar mix of ruggedness and refinement, and the 2015 Ford Expedition, which received a mild makeover this year. Both are older designs, but offer more third row and cargo space. If you intend to discover your own secret fishing spot accessed only with four-wheel drive, the more prestigious (but smaller) 2015 Land Rover LR4 will get you there for about the same cost as a Yukon. Overall, though, the new GMC Yukon will handle most of the passenger and towing duties you can throw at it, and do so confidently, comfortably and safely.

The 2015 GMC Yukon is a body-on-frame SUV available in three trim levels: SLE, SLT and Denali. Seating for eight is standard, but there are two optional seating arrangements: second-row captain's chairs drop the count to seven and an available 40/20/40 front bench seat increases it to nine. There is an extended-length version known as the Yukon XL covered in a separate review.

If you want nine-passenger capacity, you'll need to get the SLE, as the optional front bench seat is only available on this trim level. All Yukons are prepped for towing and feature a 2-inch receiver and seven-pin harness, but an HD Trailering package is also available on both SLE and SLT that includes specific gearing, a trailer-brake controller, an air suspension with increased capacity and leveling, and low-range gearing when combined with 4WD models.

Options include second-row captain's chairs (heated and power fold-and-tumble), an enhanced alarm system and adaptive cruise control with crash-imminent braking. A sunroof and a rear entertainment system with a Blu-ray player are either stand-alone options or, when combined with the optional navigation system, part of the Sun, Entertainment and Destination package.

Optional for the Denali are power-retractable assist steps and a Touring package that adds the enhanced alarm system, the sunroof, chromed 20-inch wheels, the rear entertainment system and a head-up display. Also available are 22-inch wheels.

For all Yukons, a six-speed automatic transmission transmits power to the rear wheels on 2WD models or all four wheels on 4WD models. The SLE and SLT's 4WD is a single-speed part-time system, but a two-speed transfer case with low-range gearing is optional (standard on the Denali 4WD).

Properly equipped, the maximum tow rating for the 2WD Yukon SLE or SLT is 8,500 pounds. 4WD and Denalis are a bit less.

Depending on the trim level, a head-up display for the driver, forward collision alert, lane-departure warning, a vibrating safety alert seat, rear cross-traffic alert and blind-spot monitoring are either available or standard.

In Edmunds brake testing, a Tahoe LTZ 4WD (similar to a Yukon SLT) came to a stop from 60 mph in 126 feet, a short distance for a vehicle in this class.

The overall quality and design of the 2015 GMC Yukon's interior is noticeably improved compared to those of the previous generations. Materials are of a high quality, and the gauge cluster's crisp graphics are a snap to read day or night. The large, central infotainment display is intuitive to navigate and its graphics/pictograms are simple and easily interpreted. Unfortunately, IntelliLink can sometimes be slow to respond to your touch inputs.

In terms of seating, the front seats are comfortable and reasonably supportive. The lack of a telescoping steering wheel on the SLE model will make it harder for some folks to get an ideal driving position, however. The available power-releasing second- and full-power up/down third-row seats work with ease. The third-row seat is fine for small children, but its low mounting to the floor means taller teenagers and adults will likely find their knees pushed up uncomfortably toward the roof. Most large crossovers offer more spacious third-row seating.

Given the very cumbersome nature of the previous-generation Yukon's third-row seat removal procedure (not to mention their attractiveness to "smash-and-grab" thieves), we're happy to see GM has finally integrated the third row firmly into the truck's floor. But the downside to those stow-away seats is the consequentially high (36 inches) cargo floor height, which makes it harder for shorter owners to load strollers or bigger shopping hauls.

Overall, cargo capacity is good but not great, as many crossovers (or the larger Yukon XL) fare better. With all seats occupied in the Yukon, there are only 15.3 cubic feet for luggage. Fold the rearmost seats down and there are 51.6 cubic feet. With the second and third rows down, maximum capacity stands at 94.7 cubes. Not only is this less room than its other large SUV rivals, it's significantly less volume than you'll get in a Chevrolet Traverse, which tops out at 116 cubic feet.

The 2015 GMC Yukon's 5.3-liter V8 engine is beefy enough to pull around a full complement of passengers and gear, yet plenty smooth and quiet. Due to the greater overall weight of the Yukon Denali and its larger engine -- and counter-intuitive as it may be -- to get the maximum Yukon tow rating you must select either the SLE or SLT with their smaller engines. Still, the more powerful V8 and thus more relaxed towing experience overall while behind the wheel of the Denali might be a more compelling reason to choose it over a couple hundred-pound difference when you're already tugging a heavy load or trailer.

We also like how the 2015 Yukon is luxury-car quiet, especially on the highway. The Denali's standard noise cancellation system is a further bonus. We're less fond of the Yukon's lazy responses from the gas pedal and transmission, though. There's a noticeable delay for acceleration while pressing on the gas pedal at highway speeds or from a stop.

Especially with the Denali's standard adaptive suspension, the 2015 Yukon feels relatively secure when going through turns and it soaks up irregular pavement with ease. We cannot recommend any of the fashionable 22-inch wheels, however, as their mass combined with their tires' lack of cushioning sidewalls adversely affects ride comfort. Also keep in mind that this is still a large and heavy truck-based vehicle, and large crossover SUVs will generally be easier to maneuver and more composed on rough pavement.