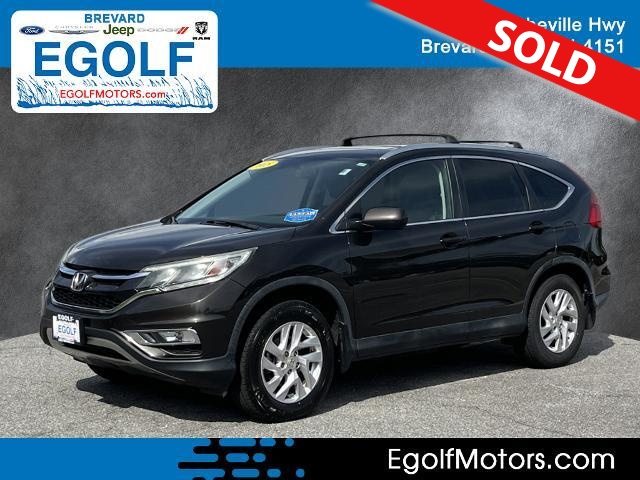 RECENT ARRIVAL ! LEATHER WITH HEATED SEATS ! AWD ! BLUETOOTH & REAR BACK UP CAMERA ! Call Egolf Motors in Brevard at 828-884-4151 then x 1. Weve been serving customers in Western North Carolina and upstate South Carolina for over 40 years where you feel like family when you walk through the door. 26/33 City/Highway MPG Awards: * 2015 KBB.com Brand Image Awards Kelley Blue Book Brand Image Awards are based on the Brand Watch(tm) study from Kelley Blue Book Market Intelligence. Award calculated among non-luxury shoppers. For more information, visit www.kbb.com. Kelley Blue Book is a registered trademark of Kelley Blue Book Co., Inc. Call Egolf Brevard at 828-884-4151. You make the drive, well make the deal and youll feel like family! Reviews: * Exceptional fuel economy; abundant passenger and cargo room; nifty self-folding rear seats; appealing tech and safety features. Source: Edmunds * The Honda CR-V has a modern aerodynamic look, with sweeping lines, exciting body sculpting, and a dramatic profile. It has enough attitude and ability to get you around town and then tackle the open road and the great outdoors. The CR-V comes equipped with a 2.4-Liter i-VTEC 4-Cylinder engine with 185hp and a Continuously Variable Transmission. It has a rigid unit-body structure, coupled with taut suspension tuning, which give it impressive handling characteristics. For ultimate 4-season security, the CR-V is available with Hondas Real Time All-Wheel Drive with Intelligent Control System that smoothes out initial acceleration and can transfer up to 100% of torque to the rear wheels. The CR-V is very fuel-efficient and can get up to an EPA estimated 34 MPG Highway when in two-wheel drive. Hit the green ECON button, and the vehicle makes adjustments to its systems so they can be more efficient. Then you get feedback as you drive from Eco Assist to let you know how efficient your driving is. Honda has placed bars around the speedometer, and the longer you keep them in the green, the f