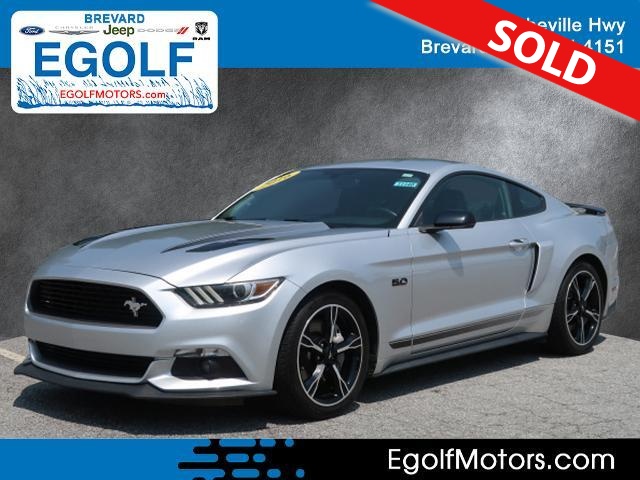 If you've ever had a desire for a sporty American coupe, now is an excellent time to check out the 2016 Ford Mustang. It is civilized and packed with modern tech, but it still holds on to all the trademark swagger and performance that has defined it for 50 years. Take a look at what the 2016 Mustang has to offer.

The Mustang's optional MyFord Touch infotainment system has been replaced by the new Sync 3 system with its simplified interface, while the EcoBoost and GT coupes gain an available black-painted roof. The GT Performance package is now offered on the convertible as well as the coupe, and all GT models get standard secondary turn signals that are integrated into the hood vents. Newly offered bundles include the Black Accent and California Special packages (GT) and the Pony package (EcoBoost). The new Shelby GT350 is covered separately.

From a turbocharged four-cylinder to a roaring V8, there are several appealing engine options; sharp and grippy handling when going around turns; lots of interior upgrades give it a classy/high-tech vibe.

Following a dramatic redesign last year, the 2016 Ford Mustang continues to distinguish itself as a muscle car with genuine crossover appeal. Traditionally, muscle cars have come standard with a certain degree of crudeness, but today's Mustang is a global product with enough refinement to make even premium brands take notice. We're not saying the fun-loving Mustang has become a personal luxury car, exactly, but it's classy enough to make some Audi or BMW buyers think twice. At the same time, it retains the tire-smoking exuberance expected of an American performance icon.

The 2016 Ford Mustang still stands out on the road thanks to last year's full redesign.

Although the 2016 Mustang is mechanically unchanged, there's significant news on the technology front. The much-maligned MyFord Touch infotainment system, which was optional for 2015, has been replaced by the all-new Sync 3 touchscreen with its simplified interface and smartphone-like pinch and swipe finger commands. Will it be a game-changer for Ford? Time will tell, but early indications are that it's much quicker and easier to use than MyFord Touch was.

Otherwise, the Mustang sticks to the beguiling formula that had everyone talking when it debuted. The 435-horsepower Mustang GT has the performance part covered, delivering formidable acceleration in a remarkably smooth manner. The turbocharged EcoBoost Mustang is palpably slower in a straight line, but it handles a little better thanks to its lighter four-cylinder engine, and it returns up to 32 mpg on the highway. Inside, the materials are a step above the muscle-car stereotype, while flourishes like metal-look toggle switches and aluminum dash inserts manage to dress up the place without seeming kitschy. Outside, the Mustang's unmistakable shape is as graceful as it's ever been, with taut, muscular contours that make valets want to park it out front.

The primary bogey on the Mustang's radar this year is the all-new 2016 Chevrolet Camaro, which shares a platform with Cadillac's capable rear-drive sport sedans and offers competitive powertrain choices. The Dodge Challenger can't keep up with either the Mustang or the Camaro in fast corners, and it's not offered as a convertible, but it compensates with a genuinely usable backseat, a large trunk and unabashedly retro styling. Another option in this price range is the nimble and upscale BMW 2 Series. You're going to have a good time in any of the above, but the all-around goodness of the 2016 Ford Mustang is hard to beat.

The 2016 Ford Mustang is available as a coupe or a soft-top convertible. There are five trim levels: V6, EcoBoost, EcoBoost Premium, GT and GT Premium.

The EcoBoost gets those options as standard (albeit with its own wheel design) and adds a turbocharged four-cylinder engine, a six-way power passenger seat, aluminum dashboard trim and active noise cancellation.

The Mustang GT drops back to the regular EcoBoost's equipment level, but it adds a V8 engine, upgraded brakes, electronic line-lock ("to enable warming of the rear tires," says Ford) and launch control (manual transmission only).

With 435 horsepower on tap, the 2016 Ford Mustang GT has no problem producing sun-blocking amounts of tire smoke.

Options for the GT are similar to those for the regular EcoBoost, though the GT Performance package is slightly different, featuring Brembo front brakes and a Torsen limited-slip differential. Also offered is a Black Accent package (19-inch black alloy wheels, black-out badges, black rear spoiler).

The GT Premium comes with essentially the same standard features as the EcoBoost Premium and offers largely the same options, but instead of the Pony package, it offers the California Special package (19-inch black alloy wheels, a more prominent rear spoiler and special exterior and interior trim details).

Rear parking sensors are optional on all Mustangs, while the EcoBoost and GT coupes are eligible for a black-painted roof. The EcoBoost Premium and GT Premium also offer 20-inch wheels.

The rear-wheel-drive Mustang is offered with either a six-speed manual transmission or a six-speed automatic with paddle shifters. Three engines are available.

A 3.7-liter V6 engine with 300 hp and 280 pound-feet of torque is standard on the base Mustang. According to EPA fuel economy estimates, it should return 21 mpg combined (17 city/28 highway) with the manual and 22 mpg combined (19/28) with the automatic.

In Edmunds testing, a Mustang EcoBoost with the automatic transmission accelerated from zero to 60 in a respectable 5.9 seconds. A GT with the manual transmission ran the sprint in a fleet 4.7 seconds, a competitive time among similarly powered rivals.

In Edmunds brake testing, both a Mustang EcoBoost and a Mustang GT (both equipped with the optional Performance package) stopped from 60 mph in 108 feet. That's better than average for this segment.

The 2016 Ford Mustang's interior pays homage to Mustangs past with retro touches like a dual-cowl dashboard, but it also offers nearly all of the latest conveniences. Even the base Mustang comes standard with unexpected niceties like keyless entry and ignition, a rearview camera (a relief given the car's poor rear visibility) and Track Apps (for measuring lap times and such). Also standard is the Sync voice command system, which greatly simplifies the operation of audio and phone functions. The available Sync 3 touchscreen infotainment system is new to the market, but it shows promise relative to its controversial MyFord Touch predecessor, providing a simplified interface with smartphone-style pinching and swiping gestures.

The Mustang's cabin is roomy for two, with the much-improved Sync 3 infotainment system taking center stage.

No matter which specification you choose, you'll enjoy generally good-quality materials. The current Mustang has thankfully added a telescoping function to its steering wheel, so most drivers should have no problem getting comfortable. Although the optional Recaro sport seats provide excellent lateral support for aggressive driving, we've found that they aren't perfect for every body type. Thigh support is somewhat lacking due to a seat bottom that won't angle upward enough, while some longer-limbed drivers on our staff noted that their elbows bump against the thick side bolsters. The Recaros also can't be had with power adjustment, heating or cooling, so be warned.

Both coupe and convertible body styles are considered four-seaters, but the rear passengers will likely be cramped unless they're small children. If you plan to ferry around larger folks in the backseat, the Challenger would be a better choice. The Mustang coupe's trunk provides 13.5 cubic feet of cargo space -- fairly generous for a sport coupe -- while the convertible offers 11.4 cubes. Standard folding rear seatbacks on the coupe expand cargo capacity.

The 2016 Ford Mustang is a well-behaved muscle car that loves the open road. Tire and wind noise are modest, making for a fairly peaceful cabin at highway speeds. The ride can get annoyingly bouncy on irregular pavement, but it's generally quite civilized unless you opt for the Performance package, which includes a stiffened suspension that's noticeably less supple. Of course, that package also tightens up the handling considerably, so if you want the most capable Mustang configuration, it's a no-brainer. But if you're not planning to attend any track days, the standard setup will likely suit you just fine with its compliant nature and still-respectable handling.

The fastback body style and sequential turn signals are a few more retro touches on the 2016 Ford Mustang.

In the engine room, the base V6 is actually pretty strong for the price, but the two optional engines are tempting. While the EcoBoost turbocharged four-cylinder is chiefly distinguished by its superior EPA fuel economy, it also unlocks the Performance package, which is unavailable with the V6. The turbo-4 could be more refined, as it lacks the smooth and consistent power delivery of its German counterparts, but it's a serviceable engine that incidentally improves handling due to its lighter weight.

As for the GT's V8, it does add some pounds in the nose, but that's about the only drawback we can think of. This 5.0-liter mill is an absolute gem, putting down serious power and spinning effortlessly to redline with nary a vibration. We just wish it had a properly assertive exhaust note to match its capabilities; as of this writing, Ford doesn't offer a sport exhaust, so you'll have to take care of that part yourself.