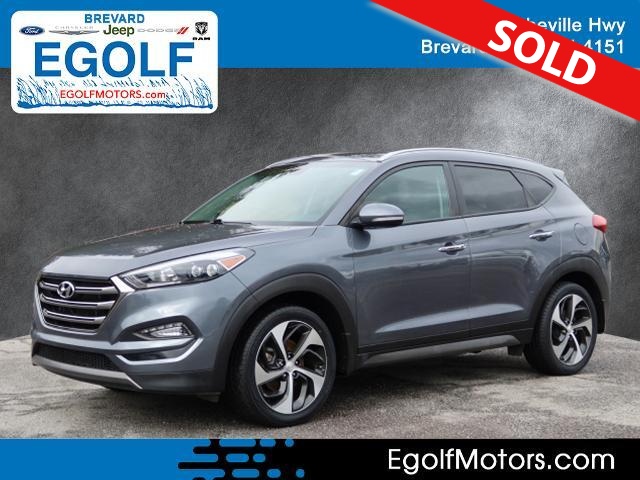 Why pay a premium for head-turning style? The Hyundai Tucson will look great in your driveway, yet it still delivers the value and versatility you expect from a small crossover SUV. The Tucson's turbocharged engine is a keeper, too. Ready to learn what else we like?

The 2016 Hyundai Tucson is an all-new model.

The sleek new styling of the redesigned 2016 Hyundai Tucson incorporates what Hyundai calls "Fluidic Sculpture 2.0" design language, which suggests it's more of an evolutionary product than a revolutionary one. After all, version 2.0 of anything is just an outgrowth of the original; it's derivative by definition. But under the new Tucson's stylish skin, there's something closer to a revolution going on. With its sprightly and fuel-efficient turbocharged engine, roomier interior and cutting-edge safety and technology features, the latest Tucson is a real threat to disrupt the compact-crossover status quo.

All Tucson models have a newly adult-friendly backseat and enhanced cargo capacity that closes the gap with segment leaders. The Tucson is 3 inches longer and 1.1 inches wider than before, and that's enough to make it considerably more competitive without diluting its endearingly maneuverable feel. There are a lot of new upscale features as well, including Hyundai's latest 8-inch touchscreen interface, LED headlights and safety features like lane departure warning and a frontal collision intervention system.

Lest you conclude that this Hyundai can do no wrong, though, we should note that the new turbocharged engine isn't available on the base SE trim, which trudges onward with a forgettable 2.0-liter engine from the previous-generation Tucson. Moreover, a number of those headline-grabbing features are reserved for the top-of-the-line Limited trim, which might test the limits of what you are willing to pay for a compact crossover SUV. But if you don't mind paying for the Limited, you'll enjoy one of the best-equipped crossovers for the price. And if you can live without those extras, the midgrade Eco and Sport trims are still nicely equipped, with the former topping out at a solid 33 mpg highway and the latter offering more creature comforts.

The 2016 Tucson occupies an interesting niche between the compact and subcompact segments. Despite the stretched dimensions this year, it's still a few inches shorter than compact stalwarts like the Honda CR-V and Toyota RAV4, which -- like Hyundai's own Santa Fe Sport -- offer more interior space but less verve. Yet the new Tucson is significantly larger than the new breed of subcompact crossovers like the Honda HR-V and Mazda CX-3, so if those models feel too cramped, the Tucson could be a sensible compromise. We also recommend the Ford Escape as a roomier option that's fun to drive, too. On the whole, though, the 2016 Hyundai Tucson is a compelling new crossover that's more of a revolution than you might think.

Step up to the Sport and you get 19-inch wheels, a hands-free power liftgate, keyless entry and ignition, heated front seats, a leather-wrapped steering wheel and a few new safety technologies (see Safety section below).

Note that the SE can be equipped with a handful of the higher trims' basic convenience features via a pair of packages (the Preferred package and Popular Equipment package). Offered exclusively on the Limited is an Ultimate package that includes adaptive xenon headlights, rear parking sensors, a panoramic sunroof, an upgraded gauge cluster with a color trip computer, ventilated front seats, heated rear seats, lane-departure warning and a forward collision mitigation system with automatic braking.

The 2016 Hyundai Tucson SE is equipped with a 2.0-liter four-cylinder engine rated at 164 horsepower and 151 pound-feet of torque. It's paired with a six-speed automatic transmission and either front-wheel drive (FWD) or all-wheel drive (AWD). EPA-estimated fuel economy is 26 mpg combined (23 city/31 highway) with FWD and 23 mpg combined (21 city/26 highway) with AWD.

In Edmunds brake testing, a FWD Tucson came to a stop from 60 mph in 121 feet, an average stopping distance for a compact crossover.

All trims provide a rearview camera as standard, while the Sport gets standard blind-spot monitoring and rear cross-traffic alert. The Limited features all of those items plus standard rear parking sensors and a couple optional items via the Ultimate package (lane-departure warning and a forward collision mitigation system with automatic braking and pedestrian detection).

The Blue Link telematics suite is standard on the Limited but unavailable on the other trims. It includes emergency safety assistance and other smartphone-based features via the Blue Link mobile app. If you upgrade to the Remote package, you also get stolen vehicle recovery, a car finder and electronic parameter settings (geo-fencing, speed/curfew alerts and valet alert) and remote ignition and accessory operation via a smartphone or even smartwatch.

The 2016 Hyundai Tucson's interior has a more grown-up look than its predecessor, featuring a restrained dashboard design with sensibly arrayed controls. The materials aren't optimal, however, as hard plastic surfaces remain the norm. That's fortunately less of an issue for the Limited, which gets upgraded trim that includes padded dashboard and door inserts with accent stitching. In any event, the Tucson has plenty of storage nooks for your stuff, particularly for front passengers.

On the technology front, the standard 5-inch touchscreen won't blow you away with its size or resolution, but it's quite user-friendly thanks to readily accessible virtual buttons and an intuitive layout. Not surprisingly, the Limited's 8-inch version is both more capable and prettier to look at; pity it's not offered on at least one of the other trims. On the bright side, USB connectivity, Bluetooth and satellite radio come standard on every Tucson, so there's no shortage of musical fun to be had.

Front seat comfort is satisfactory, and it's worth noting that the Tucson stands apart from other compact crossovers by offering a power passenger seat (Limited only). The rear seat doesn't slide fore and aft, which strikes us as a missed opportunity in this segment, but it's mounted higher than before and can now accommodate a couple of 6-footers without issue.

Cargo capacity has also improved. With 31 cubic feet behind the rear seatbacks and 61.9 cubes with those seatbacks folded down, the Tucson is close enough to the CR-V (35.2 and 70.9 cubes, respectively) to provoke thoughts about how important that maximum number really is. Sweetening the deal is the hands-free power liftgate that comes standard on Sport and Limited. Unlike the Ford Escape's version of this technology, which works via a foot sensor that you need to kick at, the Tucson employs a proximity sensor that opens the liftgate automatically if it senses you're standing in the vicinity with the key in your pocket.

Although the base SE trim has an enticingly low price, the 2.0-liter engine it's saddled with is reason enough to upgrade. This was also the base motor in the previous Tucson, and we didn't especially like it then, either, finding both its refinement and its performance to be lacking. The turbocharged engine, on the other hand, is peppy and smooth, and it gets better gas mileage to boot. The turbo's only downside is its exclusive automated manual transmission, which sometimes produces harsh upshifts and exhibits a slight delay when moving from a stop.

The base and Eco trims predictably have a more composed ride with their 17-inch wheels, but the 19s (standard on Sport and Limited) are eminently livable. Impacts are well suppressed even on rough blacktop, giving the Tucson a supple, sophisticated feel in everyday driving. Around turns, the Tucson isn't as sporty as, say, the Ford Escape or Mazda CX-5, but it acquits itself well enough for a vehicle of this type. Its compact dimensions also make it easier to fit into tight parking spots.