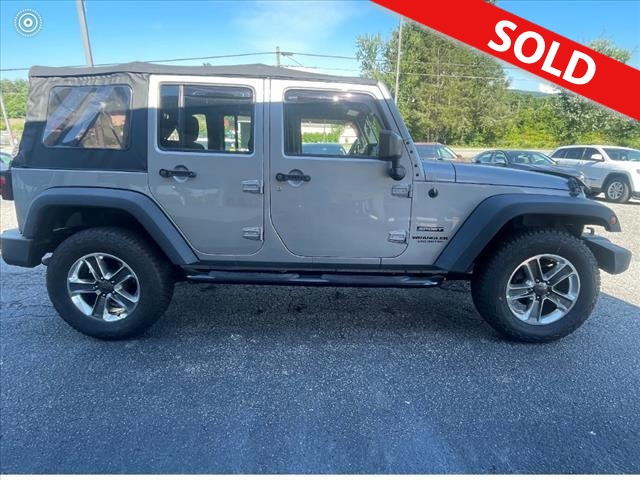 RECENT ARRIVAL ! LOW MILES ! 4WD ! SOFT TOP JUST IN TIME FOR THE SPRING WEATHER ! Wrangler Unlimited Sport, 4WD. Call Egolf Motors in Brevard at 828-884-4151 then x 1. Weve been serving customers in Western North Carolina and upstate South Carolina for over 40 years where you feel like family when you walk through the door. Odometer is 14187 miles below market average! Call Egolf Brevard at 828-884-4151. You make the drive, well make the deal and youll feel like family!

There are significant and serious reasons to think twice about the 2016 Jeep Wrangler, but there is also plenty to love about this unique, characterful, capable and unabashedly all-American SUV.

The Jeep Wrangler bolsters its already robust collection of special models with the addition of the Black Bear, 75th Anniversary and Backcountry Editions. The Wrangler Sahara trim gains some aesthetic updates and a new Olive Green interior option. There are also some new colors available, which, for the Wrangler, is actually quite noteworthy.

All but unstoppable on the trail; unmistakable styling; numerous variations; extensive factory and aftermarket parts support; fun to drive in its own special way.

The above list of "Cons" reads like words we'd craft after driving something designed 28 years ago behind the Iron Curtain. You can almost envision whatever vehicle we're talking about in grainy, sepia-toned footage with the occasional photo of Lenin and a ballistic missile parade thrown in for good measure. And yet, the vehicle in question is the 2016 Jeep Wrangler, a true American icon akin to no other. What else can evoke images of Ike driving through the liberated towns of Normandy, and fun-loving youth enjoying the never-ending freedoms of nature? Heck, the word "Freedom" is even plastered on a special-edition package and roof designs.

Yes, it's this iconic imagery and general character that makes the Wrangler so appealing despite its many drawbacks. Besides its styling, it can go places virtually no other factory-built SUV on the road would dare. Its old-school mechanical underpinnings also make it oddly fun to drive on the road simply because nothing steers or behaves in quite the same way (and hasn't in quite a long time). It's also the only convertible SUV presently on sale (let alone a four-door one) and it's definitely the only thing out there that'll let you take off the doors and lower the windshield for those moments when getting smacked in the face by a moth at 45 mph seems like a great idea.

A purple Jeep? Sure, why not. It's available as part of this year's new Backcountry Edition.

Jeep also enjoys a lack of competition. The Nissan Xterra and Toyota FJ Cruiser are no longer on sale, so the number of livable, off-road-ready SUV alternatives that aren't extremely expensive has dwindled to the Toyota 4Runner (still far pricier than the Wrangler) and those within the Jeep brand: the Renegade and Cherokee Trailhawks and the Grand Cherokee. The truth is, all of these boast better crash test scores, more secure handling and braking, quieter and more comfortable interiors, more up-to-date technology features and driving experiences light-years beyond a Soviet taxi's. But only the Wrangler is going to evoke Ike.

The Rubicon derives its top-of-the-line status from its robust off-road equipment rather than its extra interior niceties. It starts with the basic Sport equipment and adds 17-inch alloy wheels, 32-inch tires, a heavy-duty Dana 44 front axle (matching the standard-spec Dana 44 rear axle), a shorter 4.10 rear-axle ratio (standard with the manual transmission, optional with the automatic), an upgraded transfer case with a lower crawl ratio, electronic front and rear locking differentials, an electronically disconnecting front sway bar, rock rails, automatic headlamps and the under-hood insulation. Inside, you get standard air-conditioning plus the leather-wrapped steering wheel and shift knob, coat hooks, a 115-volt outlet and satellite radio. The above-mentioned Power Convenience Group is an optional extra on the two-door Rubicon, but it's standard on the Rubicon Unlimited.

Also optional on Sport and Sahara is a limited-slip rear differential, while the Sport and Rubicon can be equipped with half doors that include plastic side windows and manual locks. The Sahara and Rubicon are available with automatic climate control and leather upholstery bundled with heated front seats.

Optional on every Wrangler is a nine-speaker Alpine sound system and the Connectivity Group, which adds a tire-pressure monitor display, Bluetooth phone connectivity, a trip computer and an upgraded version of the Uconnect 430 touchscreen (available separately) that includes a USB port, media player interface, 28GB of digital music storage and navigation. All trims are also available with a higher-quality soft top as well as a black or body-colored hardtop.

Then there are the special-edition packages. The Willys Wheeler is based on the Sport and includes a limited-slip rear differential, gloss-black 17-inch alloy wheels and exterior trim, special badging, mud terrain tires, rock rails, the 3.73 ratio, the Connectivity Group and satellite radio. The Sport-based Freedom Edition has special "Granite Crystal" 17-inch alloy wheels and exterior trim, black rear sidesteps, all-weather floor mats and special badging (plus a donation is made to the USO). The Black Bear Edition has the Granite Crystal exterior trim, rock rails, a special hood decal, special cloth seats and both the Connectivity and Power Convenience groups.

Have it any way you want it: The Wrangler can be ordered with a hard or soft top, two or four doors and in a variety of trim levels.

Every 2016 Jeep Wrangler is powered by a 3.6-liter V6 engine good for 285 horsepower and 260 pound-feet of torque. Four-wheel drive is standard and includes high- and low-range gearing. The Rubicon features uniquely short gearing and an upgraded transfer case with an extra-low crawl ratio. A six-speed manual transmission with hill start assist is standard, while a five-speed automatic with both hill start assist and hill descent control is optional. Towing is rather meager at a maximum of 2,000 pounds for the Wrangler and 3,500 pounds for the Unlimited.

In Edmunds performance testing, a two-door Wrangler with a manual went from zero to 60 mph in a quick 6.9 seconds, which is pretty astonishing given the languid acceleration of past Wranglers. The heavier Wrangler Unlimited with the automatic needed 8.8 seconds, which is fairly slow compared to other off-road-ready four-doors.

EPA-estimated fuel economy is the same for the two-door Wrangler regardless of transmission, at 18 mpg combined (17 city/21 highway). The Unlimited also gets 18 mpg combined, but its city/highway numbers are slightly different at 16/21 with the manual and 16/20 with the automatic.

Every 2016 Wrangler comes standard with antilock brakes, traction and stability control and front airbags. Front side airbags are optional. A rearview camera isn't available, nor are other parking or safety aids.

The Wrangler has some of the worst crash scores of any vehicle presently on sale. The Insurance Institute for Highway Safety (IIHS) awarded the two-door Wrangler its highest possible rating of "Good" in the moderate-overlap frontal-offset impact test but a "Marginal" (second-worst) score in the small-overlap frontal-offset test. Without the optional side airbags, the tested vehicle was judged "Poor" (worst) in the side-impact test. Its seat and head restraint design was rated "Marginal" for whiplash protection in rear impacts.

The IIHS also tested a Wrangler Unlimited, rating it "Good" in the moderate-overlap and small-overlap frontal-offset tests and "Marginal" for both side-impact and whiplash protection. Interestingly, the tested vehicle also lacked side airbags despite its slightly better side-impact rating, so there's no data available on Wrangler crashworthiness with side airbags installed. There are no government crash tests of the Wrangler.

The 2016 Wrangler's interior actually has a modicum of style, particularly when the metal-look "bright interior accents" are specified. But at the end of the day, function triumphs over form. Although the upright dashboard provides clear gauges and sensibly laid-out controls, there's a distinct throwback feel when you're driving a Wrangler, evoking a bygone era when car interiors didn't resemble fighter-plane cockpits. Sure, you can have touchscreen navigation if you want it -- albeit Chrysler's old, frustrating 6.5-inch unit -- but otherwise, the Wrangler's about as basic as it gets. Honestly, anything more would seem a bit out of place. If you want the latest luxuries, another Jeep is probably more your speed.

For better or worse, the Wrangler's interior is decidedly old-school.

Rear passengers will face some challenges in the two-door Wrangler. There's room for only two back there, first of all, and the low bench with limited knee and foot room can make longer trips unpleasant, especially for adults. Access is also awkward unless the top's off, in which case nimble riders can just clamber over the sides. The Unlimited's backseat offers room for three and conventional access via its extra set of doors, though it's still not particularly comfortable or spacious. There's not much cargo room behind the two-door Wrangler's rear seatbacks (just a carlike 12.8 cubic feet), but the four-door Unlimited offers a useful 31.5 cubic feet, as well as a generous 70.6 cubic feet with those seatbacks folded versus 55.8 cubes in the two-door.

Putting the soft top up or down on any Jeep Wrangler takes patience, which makes the separate foldable sunroof panel an appealing option when the top's up and you're short on time. Security can also be an issue with the soft top. The optional hardtop, which features removable T-top-style panels over the front seats, is a smart solution for those who don't intend to go completely roofless on a routine basis. Bear in mind, though, that the hardtop is heavy, so you'll need a friend to help whenever you want to remove it.

If you want to dominate the off-road trails in your area, you've come to the right review. We specifically recommend either the Sport, Willys Wheeler or the Rubicon for this purpose. Why? Because the Sport is cheap, leaving plenty of room in the budget for custom modifications via either Jeep's Mopar parts division or the thriving aftermarket scene. The Willys comes with added off-road hardware, including beefier tires and a limited-slip rear differential, while the Rubicon goes even farther in that direction and is perfect for shoppers in search of a complete trail rig right off the shelf.

Pictured: This Wrangler Rubicon would be much happier driving around about 20 feet to its left.

On pavement, however, driving a Wrangler can elicit laughs and irritation, or depending on your outlook, a perpetual sense of adventure. Simply turning left at an intersection will highlight the slow, vague steering and abundant body roll that's truly unlike any other SUV on sale today. Higher-speed maneuvers are spooky. The ride quality is also rough, and even with the hardtop, interior noise is profuse.

Better news comes from the engine compartment. The V6 engine is a thoroughly modern power plant that gets manual-equipped two-door models up to speed in a manner that can legitimately be described as swift. The five-speed automatic transmission is fine, albeit behind the times in terms of gear count. If you are OK shifting your own gears, the manual's long-throw, long-stick shifter and easily modulated clutch adds to the fun and novelty of what is already a fun and novel vehicle.