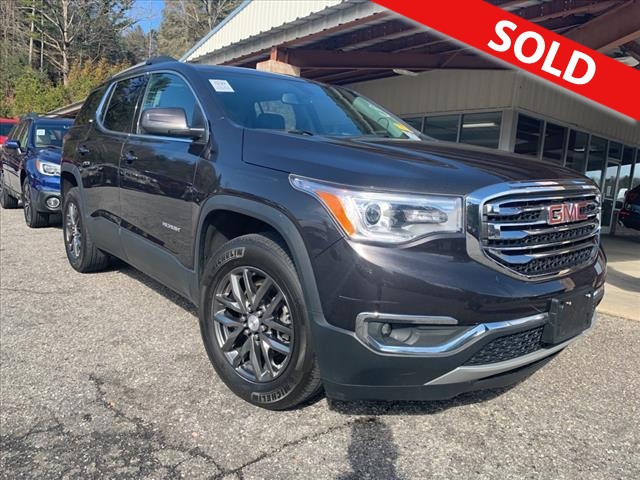 The fully redesigned 2017 GMC Acadia is smaller and lighter than before, making it easier to drive and more fuel-efficient. We think you'll agree that this new Acadia is a strong competitor among top-rated SUVs.

Cabin remains quiet and comfortable on long road trips; plenty of engine and interior configurations to fit a variety of uses; attractive exterior and interior styling.

After nine years in production, GMC has finally given its midsize SUV a full redesign. The 2017 GMC Acadia is quite a bit smaller than its predecessor, but what it loses in size, it makes up for with improvements elsewhere. Compared to the last Acadia, the 2017 model is 7.2 inches shorter in overall length, 3.5 inches narrower and 6.6 inches shorter in height. These changes translate to a reduction in passenger and cargo space, but it still remains competitive with other midsize SUVs.

The 2017 Acadia is also some 700 pounds lighter, which improves fuel economy. With the smaller footprint and weight reduction, it's easier to maneuver and corners with added confidence. A V6 engine is still available, along with a new base four-cylinder engine for maximum efficiency.

Sharp styling and a smaller footprint make the 2017 GMC Acadia easier to drive than before.

Also new for 2017 is an All-Terrain model. Contrary to its name, it is limited to light off-roading. It also does away with the third row of seats for added cargo capacity.

With all of the changes and improvements, the 2017 GMC Acadia is once again competitive in a field of strong SUVs. We consider the Honda Pilot, Mazda CX-9 and Toyota Highlander as class leaders, with the Acadia having the potential to break into this club.

The 2017 GMC Acadia is a midsize SUV with seating for five, six or seven passengers and is offered in SL, SLE, SLT and Denali trim levels.

The SLE1 trim only adds LED running lights and satellite radio, but the SLE2 steps it up with 18-inch wheels, foglights, a power liftgate with programmable height stops, roof rails, remote ignition, an eight-way power driver seat and heated front seats. The SLE2 and above trims come standard with middle-row captain's chairs that reduce passenger capacity to six, but the second-row bench is available.

Sharp styling and a smaller footprint make the 2017 GMC Acadia easier to drive than before.

The top-of-the-line Denali rounds out the lineup with polished wheels, xenon headlights, a unique grille, a hands-free power liftgate, an 8-inch touchscreen, a configurable virtual gauge display, heated and ventilated front seats and a heated and power tilt-and-telescoping steering wheel. The Denali is also eligible for the optional Technology package that adds a surround-view camera system and adaptive cruise control with automatic collision preparation.

A two-panel sunroof that is available on SLE2 trims and above. An All-Terrain package is also available on SLT1 trims and adds distinct exterior treatments, rear air vents, a cargo management system, 20-inch wheels, hill-descent control and a more advanced twin-clutch all-wheel-drive system. It also removes the third row of seats, reducing capacity to five passengers.

The 2017 GMC Acadia's base engine for SL, SLE and SLT1 trims is a 2.5-liter four-cylinder engine that produces 194 horsepower and 190 pound-feet of torque. A six-speed automatic is the only available transmission. Front-wheel drive is standard for all Acadia models, while all-wheel drive is available on all but the base SL trim. The EPA estimates fuel economy for this engine at 23 mpg combined (21 city/26 highway) with front-wheel drive and 23 mpg combined (21 city/25 highway) with all-wheel drive.

A 3.6-liter V6 that makes 310 hp and 271 lb-ft of torque is available on SLE2 and SLT1 trims and standard on higher trims (mandatory with AWD for SLT2 and Denali). This engine benefits from automatic cylinder deactivation that conserves fuel by shutting down some cylinders when cruising on the highway. Fuel economy is estimated at 21 mpg combined (18/25) with front-wheel drive and 20 mpg combined (18/25) with AWD.

Properly equipped, the V6-powered Acadia can tow up to 4,000 pounds.

Standard safety features for all 2017 GMC Acadias include antilock brakes, stability and traction control, front seat side airbags, full-length side curtain airbags, an inboard airbag for the driver, OnStar emergency telematics and a system that reminds the driver to check the backseats for passengers before leaving.

The 2017 Acadia's interior features a modern design and materials that are as good as those on any other SUV in this class. Feature availability also meets modern expectations, and the infotainment system is as responsive and easy to use as those in the Acadia's rivals.

The front seats provide plenty of comfort and support for extended road trips, as do the second row captain's chairs. We would expect that the second-row bench sacrifices some comfort for the convenience of an extra seat. The third row seats are intended for occasional use by smaller passengers, and accessing them is easier on the passenger side of the vehicle, as that middle seat slides and angles farther forward.

Luggage space behind the third row of seats amounts to only 12.8 cubic feet, which is almost half of what its predecessor had. That capacity expands to 41.7 cubic feet with the third row folded, and up to 79.0 cubes with the middle row stowed. Compared to other SUVs in this class, the Acadia comes up a few cubic feet short. Fortunately, remote latches in the cargo area allow you to easily fold the second- and third-row seats, and a hands-free power liftgate on all but the two lowest trims should make up for the smaller cargo space.

On the highway, the 2017 GMC Acadia provides a quiet cabin that adequately muffles road and wind noise. The ride quality is compliant enough to smooth over most imperfections on the pavement without ever feeling floaty or disconnected. On a curvy road, the Acadia corners with as much confidence as rivals, limited by its height and weight. Likewise, it's about as maneuverable as other SUVs in tight spaces.

A smooth ride and plentiful power from the V6 engine means the 2017 GMC Acadia is ready to challenge other top-rated SUVs.

The base four-cylinder provides adequate power, but it does feel a bit strained and sounds a bit coarse when accelerating to highway speeds, even with lighter loads. If you plan on regularly filling the Acadia with passengers and cargo, we recommend opting for the more powerful V6.

The All-Terrain model doesn't have the off-road abilities that its name suggests. It's marginally better on a muddy road thanks to a smarter all-wheel-drive system, but it's certainly not intended for challenging environments.